Difference between revisions of "Alexandrium"

A Microbial Biorealm page on the genus Alexandrium 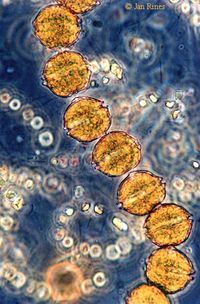 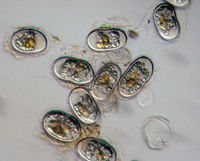 Alexandrium andersoni, A. taylori, A. lusitanicum

While they share many morphological characterists with other Dinoflagelata, Alexandrium is a very unique genus. It is most famous (or infamous) for the effects some of its species can have on the environment. Many Alexandrium species are toxic, which can cause both medical and economic harm to humans. The non-toxic species can cause trouble as well.

DNA sequencing is one of the most popular ways to identifiy different Alexandrium species.

Alexandrium species are considered armored dinoflagellates, because they are covered with thecal plates. Alexandrium have two flagella.

Alexandrum tamarense is an autotrophic organism, as is Alexandrium minutum, which obtains energy through photosynthesis. However, there are heterotrophic species as well.

Asexual reproduction through binary fission is most common (steps 1-3 on the life cycle). However, Alexandrium species can also undergo a sexual cycle. In sexual reproduction, motile mating types fuse, which produces a motile diploid zygote (called a planozygote). The planozygote will swim, then take the form of a cyst. It will wait until environmental conditions are ideal before germinating. There are several stages to the Alexandrium life cycle: motile vegetative cells, haploid gametes, diploid zygotes, resting cysts, and temporary cysts. 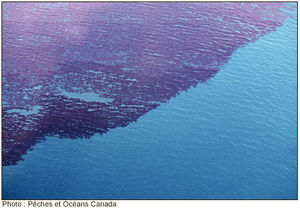 Alexandrium are toxic organsims. They live in marine environments, mainly in costal regions. They are also associated with high-nitrogen environments. Alexandrium tamarense is noted for its ability to adapt to changes in the amount of nitrogen in its environment. Some species of Alexandrium are colonial organisms. For example, Alexandrium catenella is a catenate (chain-forming) organism.

Alexandrium produce paralytic shellfish poisoning toxins (PST). PSTs are neurotoxins. They inhibit transmisison of nerve impulses by blocking sodium channels. PSTs are extremely dangerous humans if they consume contaminated fish. Paralytic shellfish poisoning (PSP) can be fatal. While not all strains and species are harmful, many can have serious consequences on animal health. In addition to PSP, Alexandrium cause the infamous red tides. The most severe red tide outbreak occured in 1972. However, the summer of 2005 yielded another extremely severe outbreak. Although algal blooms are natural, they have increased in recent years. This is due to activities such as aquacultures and agriculture increasing them amount of fertilizers entering waters where Alexandrium species live. Even non-toxic species can be harmful. Large algal blooms lead to an increase in biomass. This can cause water to become anoxic, killing fish and other organisms.