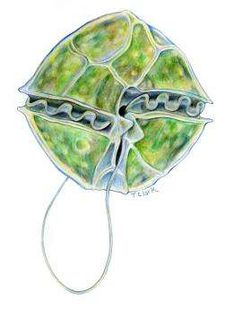 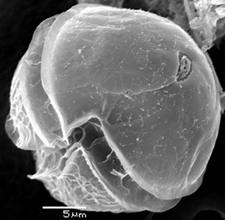 Figure 2: Alexandrium fundyense via SEM microscopy (8). The cingulum can clearly be seen around the cell. 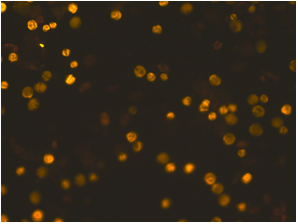 Figure 3: Cluster of Alexandrium fundyense collected during a bloom event off the shore of Cape Cod (7).

Alexandrium fundyense is a photosynthetic marine dinoflagellate that lives in the upper water column (photic-zone) of coastal waters (2). It is a part of the Thecate group or “armored dinoflagellates” meaning it has thecal plates made of cellulose surrounding the cell like armor (Figures 1 and 2) (2). Like all dinoflagellates it has two flagella. One is the transverse flagellum, which wraps around the cell in a groove in the thecal plates and provides propulsion and a spinning motion. The other is a longitudinal flagellum that extends from the posterior end of the cell and acts as a steering system (2). Alexandrium fundyense is a very significant microbe on the eastern seaboard as it causes yearly Red tide events when there are high nutrients and low grazing pressures in the coastal waters (Figure 3) (3). These large coastal blooms of A. fundyense cause problems because they produce a neuromuscular toxin called saxitoxin, which accumulates up the food chain and concentrates in the tissue of filter-feeding shellfish and fish. The consumption of these toxic shellfish by humans can lead to fatality by Paralytic Shellfish Poisoning (PSP) (3). It also leads to the shut down of coastal fishing in affected areas, which has large economic consequences for the fishing industry in those areas (3).

The complete genome of Alexandrium fundyense has been sequenced (4) and it has been found that A. fundyense has highly redundant nuclear genes (5). DNA sequencing is the most frequently used and most reliable method for distinguishing different species of the Alexandrium genus. There is evidence of very little transcriptional regulation (5) and the mitochondrial mRNA is subject to editing (6).

A. fundyense have a longitudinal flagella protruding from the sulcus on the ventral surface. Transverse flagella wrap around the cell along the cingulum, producing a propelling force and giving the cell a whirling motion characteristic of most dinoflagellates (11). Despite these flagella, the species has weak mobility and thus lives in the upper water column as plankton (2). The cell walls are divided into thick cellulose plates bound together by sutures, which are collectively called theca, and give the dinoflagellate an “armored” appearance (11). The usual cellular organelles such as smooth and rough endoplasmic reticulum, Golgi apparatus, mitochondria and food vacuoles are intact (Figure 5). Unique features include the dinokaryon, in which the chromosomes are condensed inside the nucleus, which is considered an advanced structure (12). Bacteria are closely associated with dinoflagellates during most phases of life, including both vegetative phases and sexual reproduction. Bacteria can be found both on the membrane surfaces as well as within the cell itself (9). A. fundyense reproduces by both asexual and sexual reproduction. First, cysts are produced that become swimming cells that germinate and divide under suitable conditions. When conditions become less favorable, the cells stop growing in order to form gametes which then combine to form zygotes and eventually cysts (Figure 6) (10). The accumulation of these swimming cells in marine environments is what causes shellfish toxicity in seafood. 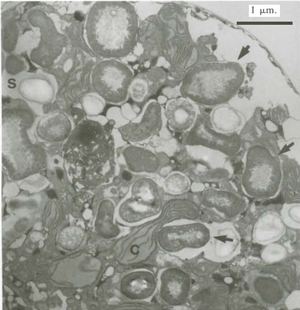 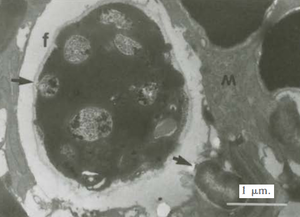 As an autotroph, specifically a photosynthetic organism, A. fundyense uses light as its main energy source to create food (2). This species is classified as a phytoplankton and contains chloroplasts (Figure 4). Dinoflagellate chloroplasts each have three membranes, furthering the idea that these chloroplasts are products of endosymbiosis of engulfed algae (12). In the early stages of growth, cells produce a neuromuscular toxin called saxitoxin (STX) which is responsible for PSP (2).

Alexandrium fundyense grows primarily in low-salinity, marine environments during the spring and summer months. The highest concentrations of Alexandrium cells are generally seen near the surface waters of the Gulf of Maine. The most growth has been observed at a depth of 0-4 meters below the ocean's surface, and blooms are generally seen in April and May of each calendar year. A. fundyense rely on nitrogen and phosphate nutrients to grow (13). In a study observing the nutrient conditions in the Gulf of Maine, there was a dramatic decrease in inorganic nitrogen concentrations in the water during A. fundyense blooms, showing that these microbes require nitrogen to grow and proliferate (13). Also noteworthy is the positive correlation between excessive rainfall and blooms of the dinoflagellate in the Gulf of Maine (13). 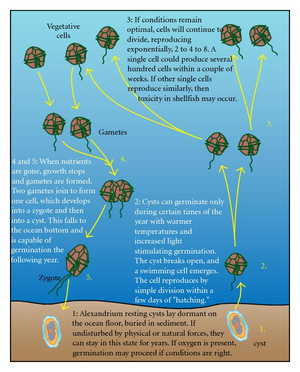 They have certainly evolved to be successful in a marine environment. A. fundyense are capable of obtaining nutrients by moving up and down the striated water column. A. fundyense form cysts, structures that are functionally similar to spores, which lay buried in the sediment. When temperature and light conditions become optimal, the cysts become vegetative and begin to proliferate freely in the water column (Figure 6) (14).

Alexandrium fundyense belongs to one of three generas of dinoflagellates that causes Paralytic Shellfish Poisoning (PSP). PSP occurs worldwide, with A. fundyense being the cause for the Gulf of Maine and New England coastal waters (15). PSP is the result of Harmful Algal Blooms (HABs) of A. fundyense in Gulf of Maine, which then spread along the coast as nutrient–rich waters and rising temperatures increase growth during the spring and summer months (15). A. fundyense produces a saxitoxin, which blocks the voltage-gated sodium channels in nerve cells, essentially stopping the communication of nerve and muscle cells (15). Humans are the most susceptible to this toxin, with a fatal oral dose between 1-4mg (15). These high levels of the saxitoxin reach humans because of bioaccumulation of the toxin in filter-feeding shellfish and fish (15). The toxin accumulates in the tissue of these filter feeders as they feed during these HABs, and if the bloom goes unnoticed these shellfish can end up on peoples dinner plates (15). Symptoms occur between 30 min and three hours of ingestion of the toxin-contaminated food. Symptoms include: numbness around the mouth, which then spreads to the face, throat and further down the body to the limbs (15). Some experience nausea and vomiting, slurred speech, and in cases of high exposure, death from respiratory failure can occur (15). The latest large-scale bloom occurred in 2005 and resulted in the closure of the shellfish industry along the coast from Maine to Massachusetts. The Massachusetts shellfish industry estimated a loss of $50 million (15). 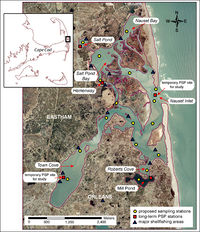 Figure 7: Map of the Nauset Marsh showing sites that were sampled for Alexandrium fundyense concentrations (17)

Keafer et al. (16) studied the bloom dynamics in the Nauset Marsh system on Cape Cod, MA, USA (Figure 7) which experiences blooms of the dinoflagellate Alexandrium fundyense every spring. This study started in 2008 when the researchers looked at the concentration of cysts within the sediments of 73 sites in the marsh. In the following spring they took weekly water samples from inside the marsh and looked at the concentration of A. fundyense in the water over the course of the bloom. Peaks in algal concentrations were seen in sites with the highest cyst concentrations and the bloom in the Nauset Marsh peaked before the offshore Gulf of Maine bloom had started (16). They also saw the bloom was worst (highest cell concentrations) in areas of the marsh with minimal flushing (Salt and Mill pond) while the bloom was somewhat alleviated in areas of high flushing (the central marsh and inlet). This indicates that within the Nauset Marsh, especially in areas with low levels of flushing the bloom is self sustaining and is not driven by the large offshore blooms. This is an ongoing project that will look further at the different dynamics that affect the annual blooms in the Nauset Marsh (16).

Galimany et al. (18) investigated the effects of Alexandrium fundyense on the blue mussel (Mytulus edulis). They did this by exposing clusters of mussels to A. fundyense for up to 9 days and monitoring the growth rate, hemocyte levels, fecal pellet and pseudofeces content, and parasite levels of the mussels. They also performed mouse assays to determine the level of toxicity in the mussels. They looked at these different measures for mussel health on day 0, 3, 7 , and 9 during the treatment and days 12 and 15 during the recovery periods (18). All of the mouse assays were inconclusive showing that the level of saxitoxin in the mussels was not high enough to be detectable by the methods used to by resource managers in the field and would not cause harmful symptoms in humans (18). There were still marked effects of A. fundyense on the mussels themselves (Figure 9). Mussels exposed to A. fundyense were shown to have a decreased growth rate and lower hemocyte levels. They found that mussels exposed to A. fundyense showed lower levels of hemocytes in their tissue while showing higher levels in their feces and pseudofeces (18). After 9 days of exposure to A. fundyense mussels showed higher levels of parasite infection generally by trematodes which are thought to have opportunistically taken advantage of the mussel's compromised immune system (Figure 8). After the removal of the A. fundyense all mussels recovered completely from the effects after 6 days (18).

The effects of A. fundyense accumulation can be devastating for local fisheries and businesses. During the 2005 red tide outbreak in the Northeast Atlantic, Massachusetts and Maine both reported shellfish sale losses on the magnitude of $18 million and $4.9 million, respectively (19) with total estimated losses of approximately $50 million (15). A. fundyense induced the closure of shellfish beds along the entire Massachusetts Bay area and up into the coast of Maine. Federal waters were also closed when the blooms developed extensively offshore (20).

(3) Keafer, B., J. Churchill, and D. McGillicuddy. 2005. Bloom development and transport of toxic Alexandrium fundyense populations within a coastal plume in the Gulf of Maine. Deep-Sea Research Part II. 52: 2674-2697