Figure 1: Portion of a phylogenetic tree determined from 16S rRNA sequencing. This figure was derived from Weelink et al. (2008) [9]. 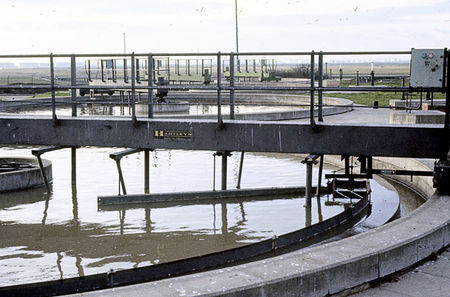 The genomes of both Alicycliphilus denitrificans strains (K601 and BC) have been determined. The size of the two strains were 4.84Mb for the BC genome and 5.07Mb for the K601 genome, both had a G+C content of approximately 68% [7].

The K601 and BC strain of Alicycliphilus denitrificans both contain the same gene cluster that encodes for the enzyme benzene and phenol monooxygenase and catechol 2,3-dioxygenase that are used for degradation of hydrocarbons [7]. However, the genome of the BC strain of Alicycliphilus denitrificans contains genes for the expression of chlorate reductase and chlorite dismutase enzymes that are not found in the K601 strain [9]. The genes for the two enzymes are located in a plasmid of the BC strain, which supports the theory that the unique ability of the BC strain to undergo chlorate respiration is obtained by horizontal gene transfer [7]. The K601 strain has a gene that encodes a bifunctional hydratase and alcohol dehydrogenase enzyme. This enzyme is not found in the BC strain and is thought to be responsible for the ability to degrade cyclohexanol in the K601 strain [4][7].

Figure 3: The reduction pathway of chlorate to produce oxygen in Alicycliphilus denitrificans strain BC with specific enzymes. This diagram was derived from the scheme described by Jin et al. (2011) [9].

The Alicycliphilus denitrificans strain BC has a strict oxidative metabolism, but it is still able to degrade compounds such as benzene in anaerobic conditions [7]. This is due to the specific enzymes that are found in its genome. Nitrate cannot be used as an electron acceptor if the benzene is used as the energy source due to the oxidative metabolism requirement, but chlorate can still be used as an electron acceptor even under anoxic condition [9]. The main reason is due to the reduction of chlorate, by the enzyme chlorate reductase, to chlorite that then provides oxygen and chlorine to the organism through the action of chlorite dismutase [9]. The oxygen is used with oxygenase to attack benzene or other organic material [9]. The strain BC is incapable of degrading cyclohexanol or phenol since they lack the enzyme for their degradation, thus they are often impossible intermediate in the BC strain's organic compound degradation such as benzene degradation [10]. 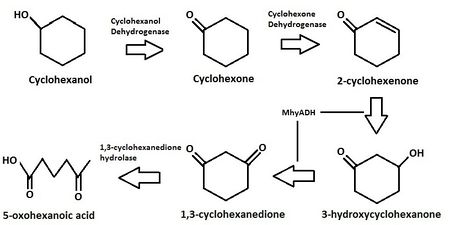 Figure 4: The possible cyclohexanol degradation pathway with bifunctional MhyADH enzyme. This diagram was derived from the scheme presented by Jin et al. (2011) [9].

Alicycliphilus denitrificans strain K601 is the currently the only identified strain of the genus Alicycliphilus that is capable of degrading cyclohexanol and phenol as a carbon source [5]. In aerobic conditions, the K601 strain can use lactate, acetate, and many other types of hydrocarbons coupled to oxygen as terminal electron acceptor [5]. Under denitrifying conditions, the strain K601 can still grow using nitrate and nitrite as an electron acceptor with alicyclic compounds as carbon sources such as cyclohexanol and cyclohexone [4]. This Alicycliphilus denitrificans contains enzymes such as carboxylase that will allow for anaerobic growth from ketone molecules with nitrate [2]. A proposed mechanism for the metabolic pathway of degrading cyclohexanol involves an initial oxidation of a cyclohexanol into a ketone that is then followed by the formation of a carbon-carbon double bond forming a structure known as a vinylketone [4]. The vinylketone then undergoes an oxidative addition of H2O to become a 1,3-cyclohexodione, which is followed by a hydrolytic cleavage [4]. This overall process would explain growth in anaerobic conditions as the H2O is used as the source of oxygen in this model [4]. A study performed by Jin et al. showed that this process of an oxidative addition of H2O is performed by a single enzyme called MhyADH that is both a hydratase and a dehydrogenase as opposed to two separate enzymes [4].

Alicycliphilus denitrificans can have denitrifying or chlorate-reducing effects to its environments. These bacteria are often isolated from wastewater treatment plants [6]. The overall environmental and ecological effects of their metabolism have not yet been well studied [8]. The ability of Alicycliphilus denitrificans to degrade many different organic compounds that could be pollutants in water, air, or soil indicates that it may be a useful organism in the bio-degradation of these compounds in both aerobic and anaerobic environments [6].

(4) Jin, J., Straathof, A., Pinkse, M., and Hanefeld, U. “Purification, characterization, and cloning of a bifunctionalmolybdoenzyme with hydratase and alcohol dehydrogenase activity.” Applied Microbiology and Biotechnology. 2011. Volume 89. p.1831–1840.