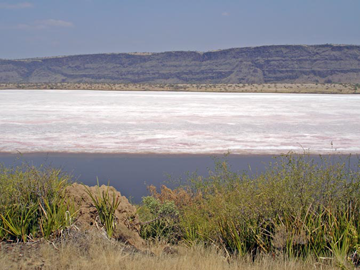 We decided to focus on Lake Magadi in our research for several reasons. There are several alkaline lakes (Lakes Bogoria, Natron, and Magadi) which are all similar to one another. They are all saline and alkaline and similar in scale. Wildlife and microbial diversity are analogous amongst all the lakes (24). We chose to study Lake Magadi because it is the most studied of the alkaline lakes. The alkaline lake niche limits diversity in microbial life due to high pH and high salinity (25). Microbes living in this niche must have modified proteomes in order to survive in such an environment. The specificity for microbial life in this niche has attracted researchers to study how microbial life exists in this environment, and current research focuses on the traits necessary for life to exist in such an environment.

Lake Magadi is the southernmost lake in Kenya, and is located in the Rift Valley. The lake is located 2000 feet below sea level forming one of the lowest points in the valley. (24)

Lake Magadi is a saline-alkaline lake. The lake acts as a sink for seasonal streams. Magadi is famous for its cherts from sodium silicate precursors. It has a pH of 10 and alkalinity of 380 mmol L-1. Lake Magadi has a surface area of 100 km2 and a depth that ranges from 1-5 m. Mineral composition consists mostly of trona mixed with halite and either kogarkoite or villaumite, resulting in fluoride concentrations up to 8.7 mg F-. The large presence of trona (sodium sesquicarbonate) causes the lake water to form a sodium carbonate brine. The high basicity of sodium carbonate makes the lake alkaline. (25)

The high fluoride concentration in Lake Magadi, is strongly related to the weathering of volcanic rocks enriched in fluoride and alkalis which are found in the same area as Lake Magadi. This has affected the local community who have customarily used the chert from Lake Magadi as a meat tenderizer and has inadvertently ingested high levels of fluorine. (25)

A gel of Sodium-aluminum silicate as thick as 5 centimeters are found in Lake Magadi. These gels are formed through the interaction of hot alkaline springwaters (67 degrees celsius to 82 degrees celsius with a pH of about 9), with alkali trachyte flows. Algal mats from the lake protect the gels from erosion. It is believed that this gel was a precursor for the cherts of rocks in Lake Magadi. It is also believed that hydrous sodium silicates and their chemical precipitates may form bedded chert deposits in the lake as well. Cycling alkaline levels are represented in alternating bands of silica rich and iron rich segments. (23)

Species Diversity and Effects of Interaction

Lake Magadi is a popular destination for many animals due to the fact that it is situated between Massai Mara and Amboseli National Parks, but very few animals actually have any contact with, or live in, the lake itself. However, the lake is a popular destination for wading birds during the dry season including flamingos, heron, pelicans, and spoonbills. The birds congregate in streams of fresh water that run into the lake because this water brings in large amounts of diverse food. There is only one species of fish that can actually be found in the lake itself. Tilapia grahami, a type of small tilapia, have adapted to live in the harsh conditions of the lake, and are normally found in the lagoons on the lake’s periphery. An abundance of research has been performed on these fish, indicating that the fish have adapted to live in temperatures up to and possibly above 44◦C, a pH varying between 5-11 (though the lake naturally ranges from pH 9-11), low oxygen levels in the water (as low as 1.1 mg O2/L of water), and a salinity concentration up to 4% (16). These tilapia have many adaptations to survive in this lake, and due to the lakes extreme conditions, little other non-microbial life exists.

Effects of microbial metabolism on the environment

The proliferation of certain kinds of halophilic archaebacteria, particularly Natronobacteria, causes the salt flats of Lake Magadi to turn a vivid pink color. This type of bacteria grows optimally in pH 9.5 at a very low Mg2+ level (18). What is most unique about Natronobacteria is that they tolerate both halophilic as well as alkaliphilic environments, meaning that they can thrive in both salty and high pH environments (17). This is possible because they have the ability to maintain internal pH levels as well as osmotic pressure very well. Firstly, to maintain the right pH, these bacteria pump in hydrogen ions at a specific rate. They must keep their cytoplasm more acidic to buffer out the extreme external pH levels. Also, some actually produce stable pH enzymes, which aids in the resistance of the high pH. Secondly, to maintain osmotic pressure, they use certain molecules such as sugars to help control the salt levels inside the cell, making sure that the pressure is the same inside and out. To thrive, these aerobic organisms (utilize oxygen in their metabolism) require high amounts of salt and nutrients. More specifically, they use complex sugars such as ribose, sucrose, and glucose to fix nitrogen to produce organic compounds which ultimately lead to their growth (19). As the cells of these bacteria proliferate, they synthesize carotenoids, organic pigments that protect against photooxidation as well as exhibit a red/pink color for this specific type of bacteria. Since Natronobacteria thrive mostly in salty conditions, this pigmentation is seen most frequently in the vast amount of salt flats that surround the lake. This is what gives the lake one of its most famous attributes: an overall blushing appearance.

A large amount of current research involving lake Magadi is to try to purify and culture novel forms of bacteria able to live in alkaline lakes. For example, in 2004 eight new strains of denitrifying bacteria were found in a lagoon with a pH of 10 by looking at their 16s rRNA to prove they are in fact eight new strains of a new species, and how related they are to other currently known species(15). Another more recent project, published in December of 2007, described experiments that isolated a new genus and species of bacteria, Methylohalomonas lacus (13). Two strains of these bacteria were cultured from the sediment of Lake Magadi and another alkaline lake in the Kulunda Steppe in Altai, Russia by growing bacterial cultures on media containing varying salt concentrations and pH levels, and projects are ongoing to try and find more microbial life with the adapted ability to live in the alkaline conditions of lakes such as lake Magadi.

Natronobacterium and Insight into Protein Composition

An abundant amount of current research projects involving Natronobacteria include classifying and isolating different strains of this type of bacteria in other highly saline and alkaline environments. One such type of research was held in the soil of former Lake Texcoco located in valley of Mexico City, Mexico. Using 16S ribosomal RNA gene sequencing, numerous clades coming from the Halobacteriaceae family were found including Natronobacterium (20). This project is still ongoing since there are still species that have yet to be identified in the soil. This is significant because scientists are finding more and more strains with a variety of beneficial characteristics that can potentially be utilized.

In a study conducted on haloalkaliphilic microorganisms from soda lakes, a comparison of the amino acid composition and various proteins’ reaction to enzymes, salts, and pH in their respective mediums. Natroniella acetigena, found in Lake Magadi, had 30.91 mol % of the total cellular protein amino acids to be the acidic amino acids glutamic and aspartic. Natrioniella acetigena was described as being extremely halophilic. In more moderate haloalkaphiles such as Tindalia magadiensis and Halamonas campisalis, acidic amino acids stood at 24.36 mol % and 23.15 mol %. It was observed then, that the percentage of acidic amino acids over basic amino acids (lysine and arginine) increased with higher pH. Enzyme tolerance in alkaphillic microbes was found to be tolerant to salts and pH values, but levels of tolerance were found to vary. The activity of Natroniella acetigena’s CO dehydrogenase was highest when in solution of 0.7M NaCl and was independent of NaHCO3 concentration. The CO dehydrogenase activity of Tindalia magadiensis was highest in the absence of NaCl and in 0.25 M NaHCO3. Optimum pH for all microbes studied was found to be in the alkaline zone. It was concluded that the amino acid composition is determined by the osmoadaptation strategy. (22)

A research project involving lake Magadi focused on the Tilapia grahami, the small tilapia described above. There are isolated populations of these fish in lagoons around the edge of the lake, all living in differential volumes of oxygen, pH levels, temperature, and salinity(14). Once a year, during the flood season, there is the possibility for these isolated populations to come into contact with one another, and researchers are looking at the possible flow of genetic information between these isolated populations, and the adaptations that may have arisen from this isolation/interaction dichotomy by looking at regions of the mitochondrial DNA from six populations of these fish. The evidence suggests a model that does not include gene flow between these populations, though new, more stable DNA sequences are being studied to try and better categorize this isolation.

A study has been done concerning the urea production of the Tilapia grahami due to the high salinity and alkalinity of Lake Magadi. In this study, the fish were exposed to varying levels of salinity and alkalinity, and a number of characteristics were discretely observed. For example, as lake water was diluted from natural Magadi concentrations to freshwater, the fish demonstrated normal urea excretion, an observation further reinforced by unchanged levels of urea cycle enzymes in each fish, while ammonia excretion was not observed despite trials in favorable conditions. Additionally, their sodium and chloride ion regulation mechanisms demonstrated favorable adaptation, as reflected by their similarities to fish that typically inhabit the varying environments applied in this study.

The two observations of interest were decreased oxygen consumption and subsequently increased swimming speeds in response to exposure to less saline and alkaline environments. Furthermore, acid-base gradients were drastically reduced, and consequently the study suggests that up to 50% of the Tilapia grahami’s metabolic demand is derived from acid-base regulation. As a result, the researchers concluded that the highly saline and alkaline environment puts a much greater strain on the Tilapia grahami that, when reduced by dilution, saves a significant amount of energy that can be used for faster swimming. (6)

Alkaliphiles isolated in soda lakes have been analyzed and used for their various alkali-tolerant enzymes in many industrial processes (21). Because these enzymes have the ability to function at high levels of pH, they are particularly useful in processes that require these extreme conditions. These alkaliphiles are thought to have significant economic potential because their specialized enzymes are already “used in detergent compositions and in leather tanning, and are foreseen to find applications in the food, waste treatment and textile industries; additionally, (they) are potentially useful for biotransformations, especially in the synthesis of pure enantiomers” (21). Specific examples of such enzymes are proteases (used as detergent additives), starch-degrading enzymes, cellulases (laundry detergent additive), and pectinases (used to improve production of paper as well as waste treatment) (26). These applications are the beginning of an increasingly growing trend in maximizing the usefulness of bacteria.

The extreme environment of Lake Magadi demonstrably limits the assortment of organisms by whether or not they are able to cope with the lake’s alkaline and saline characteristics. Its most prominent inhabitant and only fish, the Tilapia grahami, has been shown to have adapted mechanisms to endure the extreme salinity of the lake. The specialized but shared metabolic properties of Magadi’s microbes indicate just how extreme the environment is and what is needed to live here, and the research that has been done so far provides some insight into what makes these organisms unique.