E. histolytica secretes proteinases that do considerable damage to their host. They produce proteolytic enzymes and cysteine proteases that aid in their ability to invade tissues. They can dissolve the tissues of the host and can kill the host cells on contact. The proteinases immobilize the cells and cause them to lose their cytoplasmic granules and structures. Finally, the nucleus of the cell will disintegrate. The proteinases can also engulf the red blood cells of the host. 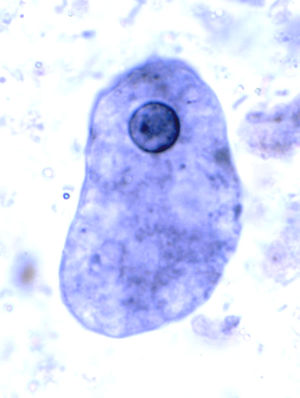 Amoebiasis is an infection affecting millions of people a year. It is important that research be focused in diagnosing patients in places like India, tropical regions of Africa, Mexico, and other areas of Central America, where it is most commonly seen and where contaminated food and water are commonplace. In order to prevent the thousand of deaths