Amphibacillus fermentum are motile, gram positive, rod shaped, alkaliphilic, facultative anaerobes that are resistant to heat and dessication1. They were first isolated from the anaerobic regions of the alkaline Lake Magadi in Kenya [1]. A. fermentum requires Na+ and CO3- for growth and can grow at a pH of 7.0 to 10.5, though growth is optimized at a pH of 8.0 to 9.5 at 37 to 38oC [1]. They are saccharolytic chemoorganotrophs, which ferment glucose to formate, as well as ethanol and acetate under anaerobic conditions [1]. Unlike other bacilli, A. fermentum do not form spores [1]. However, as the bacteria grow independent of chloride levels [1], they are resistant to the changing mineral and moisture levels of the alkaline environment and are highly adapted to their natural environment. Before the isolation of A. fermentum, all bacilli isolated from alkaline lakes have been obligate aerobes [2]. As such, A. fermentum serves as representatives of the anaerobic environment in alkaline lakes that undergo cycles of complete dessication [1].

A. fermentum are thin rods with a subterminal flagella protruding from their gram positive cell wall [1]. They divide by binary fission, which can sometimes be unsymmetrical [1]. A. fermentum are resistant to heat, and can resume growth after being heated to 80oC [1]. This is in contrast with other Amphibacillus species that produce spores in response to unfavorable heating [1,3-6]. They are also resistant to drying, though unlike Amphibacillus tropicus, they are not resistant when placed into salt crystals formed by evaporation of minerals [1]. However, the natural environment of A. fermentum is not on salt crystals, therefore this does not necessarily represent the bacterium’s competitive ability to grow.

The genome of A. fermentum has yet to be sequenced, however, the chemical characterization of the genome corroborates their classification as low G+C content (41.5%) member of the phylum, Firmicutes [7]. The 16S rRNA gene of A. fermentum demonstrates the closest ancestry to the haltolerant Gracilibacillus halotolerans, as opposed to the alkaliphilic Amphibacillus xylanus [1]. It has been proposed that organisms unique to the alkaline environment have evolved separately [2], which may explain the low homology between A. fermentum and A. xylanus. 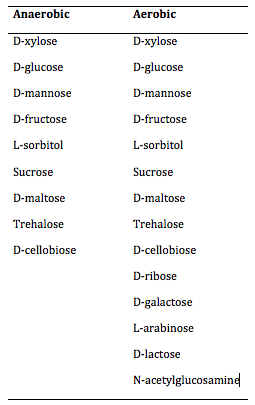 FIGURE 1. Energy sources utilized by A. fermentum under anaerobic and aerobic conditions.

FIGURE 2. NADH re-oxidation by A. fermentum under anaerobic and aerobic conditions. 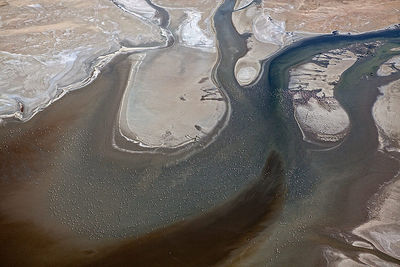 A. fermentum was first isolated under anaerobic conditions from Lake Magadi, in Kenya [1]. The isolates required yeast extract to provide methionine and grew on sucrose in single, pairs or in short chains [1]. They are able to compete with obligate anaerobes under anaerobic conditions [1]. In fact they should have a greater competitive ability since they are resistant to drying [1]. A. fermentum interact with secondary anaerobes that utilize the formate, acetate, ethanol, and CO2 produced [8]. In particular, the formate can be used for interspecies hydrogen transfer [8]. The formate provides H2 for methanogens to synthesize methane via methanogenesis [9]. The consumption of H2 by methanogens is important for the growth of A. fermentum as anaerobic fermentation is inhibited by high H2 concentrations [9].

Processes such as mining and food processing factories have expanded the number of alkaline environments present [8]. Alkaline lakes are almost closed systems, with photosynthetic cyanobacteria providing biologically available carbon and nitrogen [2]. A. fermentum play a role in cycling the influx of nutrients. Other organisms growing under the presence of oxygen can use the aerobically produced acetate [2]. These aerobic organisms possess hydrolytic enzymes and can therefore metabolize a variety of nutrients, including the metabolites produced by A. fermentum [2]. In anaerobic conditions, the ethanol and acetate byproducts can be used by haloalkaliphiles, but not by the obligate methylotrophs as they only use methanol as substrate [2].

General alkaliphiles do not produce neutralizing compounds, however A. fermentum does produce ethanol [10,11]. Exiguobacterium sp. is alkaliphilic and can neutralize wastewater from a pH of 12 to a pH of 7.5 [11]. A. fermentum can maintain an intracellular pH that is two units lower than the environmental pH, and as such, can maintain an internal pH that is optimum for their enzymes despite the alkaline external environment [8]. As A. fermentum can also produce neutralizing metabolites [8], they may be used in bioremediation of waste in alkaline conditions such as wastewater from the beverage industry [11]. Glucose, sucrose and fructose present in the beverage waste can be used as nutrient sources for A. fermentum and under anaerobic conditions, formate and ethanol can be formed as byproduct which aids in reducing the environmental pH [11]. The ability for A. fermentum to competitively compete and grow under aerobic and anaerobic conditions makes it a practical candidate in bioremediation of alkaliphilic environments.