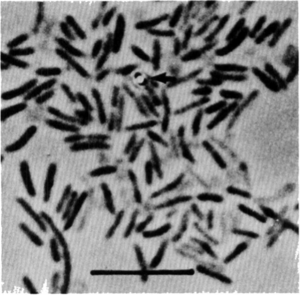 Amphibacillus xylanus is a Gram positive, spore-forming, and chemoorganotrophic bacterium that was isolated from composts of manure with grass and rice straw. They are also a facultative anaerobic organism that can grow in several different environments. However, it lacks cytochrome, quinone, and catalase. This helps explain the method of metabolism that Amphibacillus xylanus relies on.

Amphibacillus xylanus is also flagellated and motile, and it maintains many of the characteristics known to Amphibacillus. For example, the cells are rod-shaped and are 0.3 to 0.5 micrometers in diameter and are 0.9 to 1.9 micrometers long. The spores are oval in shape and heat resistant. The sporangia, where the spores are formed, are lysed and the spores are then released. These spores are formed under both aerobic and anaerobic conditions. Amphibacillus xylanus does not grow in nutrient broth, but it produces ethanol, acetic acid, and formic acid under anaerobic conditions and acetic acid under aerobic conditions from glucose. When colonies are grown on glucose agar, the colonies are small, circular, smooth, convex, entire, and white after only one day of incubation.

The sequencing of the Amphibacillus xylanus genome was completed in October, 2012 and it is under review for publishing, but the sequence can be found here. Amphibacillus xylanus has a circular genome with 2569486 nucleotides and within the genome there are approximately 2411 protein genes and 78 RNA genes. It has been found that Amphibacillus xylanus is not related to representative species of the genera bacillus, which include clostridium and sporolactobacillus. In fact, little of its genome has matched any other bacterium. In the SinIV, 15abb, and EpO1<font: super>T, the DNA genome had a 36-38 cytosine + guanine percentage.

Very little of Amphibacillus xylanus' genome has been found to match the genome of other bacteria, and even though Gram-positive microorganisms are taxonomically distant from Gram-negative organisms, the amino acid sequence of A. xylanus' NADH oxidase was found to share 51.2% similarities with the alkyl hydroperoxide reductase from S. typhimurium. Another protein in Amphibacillus xylanus is found to have a 64.3% similarity to the AhpC of S. typhimurium.

A. xylanus' NADH oxidase has been found to have unique functional properties that are different from other NADH oxidases. NADH oxidase was found to catalyze the electron transfer between NADH and DTNB (requiring 6 electrons), and this leads to the idea that there are redox centers in addition to the FAD found in the protein. Once further tests were run, the two disulfides that served as the redox centers were found to be the cys-337 and cys-340 within the NADH oxidase. Amphibacillus xylanus is able to perform alkyl-hydroperoxide reductase activity in the presence of AhpC. This activity is very dependent on ionic strength as well as salt concentration. The absence of ammonium sulfate lowers the activity. For the salt concentrations, the stimulation was greatest with phosphate and the least with chloride. This pattern suggests that the activity by salts is due to enhancing the hydrophobic interaction between the flavoprotein (NADH oxidase) and the simple disulfide protein (AhpC). 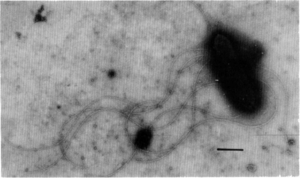