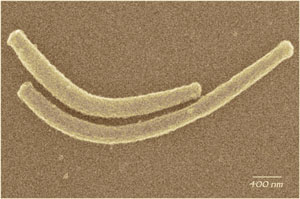 Anaeromyxobacter dehalogenans is a slender Gram-negative rod-shaped spore-forming soil bacterium. It is capable of a gliding motility and it forms a spore-like structure (1). It was the first Myxobacterium that was found capable of anaerobic respiration, wherein it is able to grow by coupling the oxidation of both acetate or hydrogen, which is a distinguishing property of the organism from other reducing populations, to the reduction of ortho-substituted halophenols, ferric iron, nitrate, nitrite, nitrous oxide, manganese oxide, uranium (VI) and fumarate (1). Of interest is its unique respiratory reduction of nitrate and nitrite to ammonia which is not linked to its ability to reduce nitrous oxide to nitrogen gas.

The first culture (strain 2CP-1) was first isolated by anaerobic enrichment from a Michigan soil sample on 2-chlorophenol and acetate followed by growth of single plate-grown colonies. Subsequent isolates were obtained from tropical rainforest soil and a Michigan compost (strains 2CP-3 and 2CP-C). Once it was recognized that Anaeromyxobacter strains could reduce metals, evidence was obtained of their presence soil uranium-contaminated sediment collected at the U.S. DOE Field Research Center near Oak Ridge, TN. This evidence based on 16s rRNA gene-based community analysis of the sample suggested that the species helped in metal reduction (3). This led to the isolation of several new Anaeromyxobacter stains (FW-109, FRCW, FRCR-5 and FRCD-1) from this uranium impacted site. These metal-reducing microorganisms are widely distributed in the environment (1). Anaeromyxobacter strains have been found in undisturbed and contaminated soils and sediments, and evidence shows they also exist in acidic subsurface sediments (3) and agricultural soils (strains R, DCP-15, DCP-19, DCP-18 and DCP-2).

A. dehalogenans is an important model organism that exists as both as a productive dechlorinator and metal reducer. Sequencing the genome of this bacteria (strains 2CP-C, 2CP-1, K and FW-109 by DOE Joint Genome Institute (JGI)) also provides information about the reductive dehalogenase genes, metal reduction biochemistry and the organization of its operon. This will help in the design of nucleic acid-based tools to "detect, monitor and quantify functional genes involved in reductive dechlorination processes at contaminated sites" (4). By studying the potential interferences between the competing substrates in contaminated environments we can further understand bioremediation efforts (1). 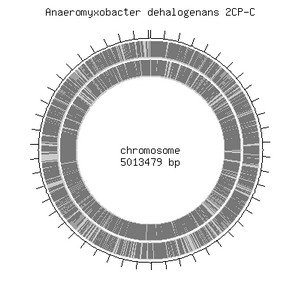 The Joint Genome Institute has determined the complete genomic sequence of A. dehalogenans strain 2CP-C. The genome of contains 5,013,479 bp, 4,346 genes and its predicted origin is at 3,425 kbp. It contains 58 RNA genes. It has a 75% GC content and a 25 % AT content. It is found as 90% coding. A. dehalogenans has a circular chromosome topography. It does not have any plasmids.

Anaeromyxobacter dehalogenans exhibits both aerobic and anaerobic growth, preferring the latter. It lacks a fruiting body, which is uncharactaristic of the Myxococcus subgroup it belongs to, but it can be considered a Myxococcus due to other similarities, both structural and genomic (1). As a member of the delta-proteobacteria group, however, anaerobic metabolism is not unusual (see Geobacter, Desulfovibrio or Desulfomonile). One A. dehalogenan metabolism type allows halogenated phenolic compounds to be used as electron acceptors for growth (7). This "chlororespiration" (or halorespiration) takes advantage of the energy released during reductive dechlorination of compounds like 2-chlorophenol. This energy is used by the organism for growth (8).

A. dehalogenans strains exhibit a great deal of metabolic diversity, such as halorespiration of herbicides, ferric-ion reduction, nitrate or nitrate reduction to ammonia, and N2O reduction to dinitrogen gas (5). It is able to grow under both oxic and anoxic redox conditions. It uses (oxidizes) a variety of electron donors, such as pyruvate, glucose, succinate, formate, acetate and`hydrogen (6). The oxidation of these donors is coupled to the use (reduction) of many types of respiratory electron acceptors (aerobic bacteria use oxygen as a terminal electron acceptor), such as Uranium(VI), Fe(III), Mn(IV), halophenols, oxygen, nitrite (to ammonia), nitrate (to ammonia), nitrous oxide (to dinitrogen) and fumarate (1).

Anaerobic conditions have been found to possibly impact "agrochemical fate, nutrient cycling, and plant/seed-microbe interactions" and research has shown that A. dehalogenans is useful in "charactarizing anaerobic agricultural soil processes in an observatory" (5). Under environmentally relevant conditions this organism flourishes and is competitive as it acts as both a productive dechlorinator and a metal reducer. It is not affected by changing redox conditions and it is found to be active at a pH of 6-8.5 (1).

Anaeromyxobacter dehalogenans is not a pathogen, nor does it cause disease.

Understanding the class of enzymes involved in this organism's processes, the novel catalytic proteins and the mechanisms involved in metal reduction can lead to biotechnological applications especially at sites that contain halogenated and chlorinated compounds, where bioremediation is possible by "supplying the populations of interest with reducing equivalents needed to reduce the contaminants" (4).

1. Towards a More Complete Picture: Dissimillatory Metal Reduction by Anaeromyxobacter Species is a 3-year project lead by Frank Loeffler and Robert Sanford focusing on uranium reduction in the species. The research will look at the isolates of the bacteria and look at its physiological requirements. Molecular biology tools will be designed in order to detect and quantify samples in culture and in the environment with hopes to discover Anaeromyxobacter's distribution and abundance. Also, at the Field Research Center they will attempt to isolate additional species.

2. Biomolecular Mechanisms Controlling Metal and Radionuclide Transformations in Anaeromyoxybacter dehalogenans is a research project whose goal is to find out the "molecular mechanisms of radionuclide biotransformation" and "assess the effects of relevant environmental factors on these transformation reactions" (9). By using targeted physiological and genetic analysis and a microarray-based comparitive genomics approach they aim to find out the mechanisms involved allowing us to become more capable of predicting processes involved transformation of subsurface environments in order to use for bioremediation.

3. Fast Dechlorination of Chlorinated Phenols by Anaeromyxobacter dehalogenans Strain 2CP-C is a research study by R. A. Sanford and Q. He at the University of Illinois, focusing on the physiology and kinetics of the dechlorination that allows the organism to grow. Using halogenated phenolic compounds they determine rates of growth and dechlorination, and furthermore aim to determine if the strain can be used for the bioremediation of chlorinated phenols.