Difference between revisions of "Anammox" 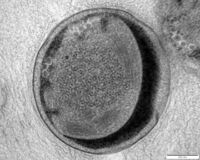 Anaerobic ammonium oxidation (Anammox) is a significant component of the biogeochemical nitrogen cycle [2]. The process was discovered when it was noticed that ammonium was being converted to dinitrogen in a fluidized-bed reactor system at a yeast factory nearly 20 years ago [11]. Anammox-capable bacteria are obligately anaerobic chemolithoautotrophs [3]. Five “Candidatus” anammox genera have been identified so far: “Ca. Kuenenia”, “Ca. Brocadia”, “Ca. Anammoxoglobus”, “Ca. Jettenia”, and “Ca. Scalindua” [11]. These genera make up a clade inside the phylum Planctomycetes [12]. Anammox bacteria can grow at temperatures ranging from -2 to 43 °C [2] and pH levels of 6.7 to 8.3 [3]; optimal pH is 8, while optimal temperature varies according to species [3]. These bacteria grow slowly, with a doubling time ranging from 10 days [3] to 2 weeks [11], and possess physiological adaptations unlike what would be normally expected of prokaryotes [11]. An unusual characteristic of anammox metabolism is the production of the metabolic intermediate hydrazine [11], which is one of the strongest reducing agents known in biological systems [3]. It is used as rocket fuel and in the manufacture of explosives and pesticides [6]. Anammox bacteria cannot be successfully grown in pure culture, especially due to their slow growth rate [11]; using a sequence batch reactor has proven to be a viable method of culturing them in large quantities [3].

Molecular Process of the Anammox Reaction

The overall reaction for the Anammox Process is given below [4]: 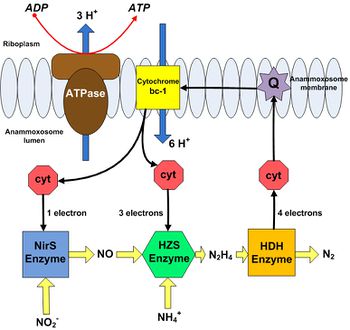 This reaction may be further broken down into the redox half-reactions that occur within the cell [4]:

The anammox process is reversibly inhibited by a dissolved oxygen concentration over 2μM [3]. Additionally, despite nitrite being a substrate for anammox bacteria, a concentration greater than 10mM slows down various aspects of cellular metabolism, and a concentration greater than 20mM completely (but reversibly) stops cellular metabolism [3]. These values were obtained by observing anammox bacteria behavior in large batch cultures relative to non-inhibited control cultures [9]. Anammox bacteria that are inactive may be brought back to normal by adding catalytic amounts of hydrazine or hydroxylamine to the culture medium [9]. Hydrazine present in the growth medium has been noted to significantly reduce the long-term viability of anammox bacteria, despite being an intermediate in the anammox process [6]. 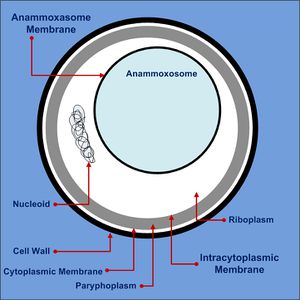 Anammox bacteria exist as coccoid cells, with a diameter of approximately 800-1100nm. They possess a proteinaceous cell wall with no peptidoglycan and have no outer membrane. As such, they do not resemble either gram-positive or gram-negative bacteria [11]. The composition of their membrane lipids is very interesting, as both ester-linked and ether-linked fatty acids are present [11]. The presence of the latter is unusual, since it is typically an Archaeal characteristic [11]. The anammox bacteria possess membrane lipids called ladderanes, which have structures not seen elsewhere in prokaryotes [1]. These special lipids make cellular membranes denser and stiffer, decreasing permeability and unwanted loss of metabolites [11]. Ladderanes reside mostly in the anammoxosome membrane, but also exist in the intracytoplasmic and cytoplasmic membranes [1].

The riboplasm in anammox bacteria is analogous to the cytoplasmic compartment of a bacterial cell. It is where the nucleoid and ribosomes are located, and is the location of transcription and translation [11]. It is bound by the intracytoplasmic membrane and is the site of glycogen storage [12]. Glycogen provides the cell with energy and acts as a carbon source when the cell is stressed, while also playing a role in biofilm formation [12].

The anammox process plays a significant role in the nitrogen cycle, turning over nitrite and ammonia to dinitrogen [11]. The anammox process is one of two microbial processes that release fixed nitrogen from the environment as dinitrogen, the other being denitrification [4]. Anammox bacteria have been discovered in many environments, including suboxic marine zones, coastal sediments, lakes, and wastewater treatment plants [11]. Recently, they have been discovered in freshwater sediments [8]. Anammox is estimated to contribute up to 50% of the dinitrogen production from marine environments, resulting in the removal of fixed nitrogen [7].

One of the most significant and widespread uses of the anammox reaction is the treatment of sewage and wastewater to remove ammonium [10]. The complete oxidation of ammonia to dinitrogen is desired in wastewater treatment. While this by itself is thermodynamically possible, it is biochemically impossible [10]. Coupling the anammox reaction to aerobic oxidation of nitrate to nitrite achieves this desired effect, as the nitrite produced by aerobic ammonium oxidation is able to seed the anammox reaction, which turns over nitrite and ammonium to dinitrogen [10]. This reaction coupling is implemented using either a one-vessel system, where both reactions occur in the same container, or a two-vessel system, where the two reactions occur in separate containers [10]. Commonly treated waste-laden waters include sewage and effluent from food processing plants [10].