A Microbial Biorealm page on the genus Anaplasma marginale 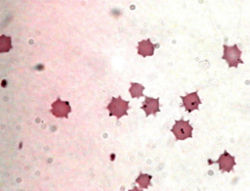 Anaplasma marginale is the most prevalent tick-borne, livestock pathogen worldwide and poses a considerable constraint to animal health. The disease results in significant morbidity and mortality of United State's (US) cattle population, which affects the exportation of beef. Despite a global impact on animal health, there is no widely accepted vaccine for "Anaplasma marginale." Live vaccinations are blood-based and are often used in tropical countries, but they cannot be licensed in the U.S. because of the risk of transmitting any known or unknown pathogens [1]. Thus, finding an effective vaccine for anaplasmosis is a priority for the USDA National Cattlemen’s Beef Association and many other research groups.

'The genus Anaplasma which contains both animal and human pathogens. Being a Rickettsiales obligate intracellular bacterium, it requires a host in order survive. These organisms can be easily cultured from the red blood cells of cattle. While mammalian erythrocytes seem to be the only site of infection, the bacterium also undergoes a complex developmental cycle in ticks. When a tick feeds on a host cattle, the bacteria enter through the site of the bite, infecting the animal. The genomic information of the species would have a broad applicability to closely related organisms within the same order, since members of Rickettsiales are responsible for both animal and human diseases and deaths. 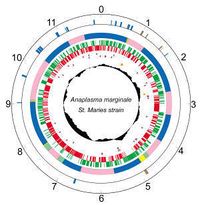 Members of the order Rickettsiales are small, obligate intracellular bacteria that typically have short genomes due to possibly "reductive evolution" as endosymbionts. Because many obligate bacteria are difficult to culture in vitro, the need of a host for growth makes it difficult to obtain large amounts of the organism-specific DNA necessary for whole genome sequencing [2]. The first complete genome sequencing was done on the St. Maries strain:

Anaplasma marginale is a pathogenic gram-negative stain bacteria with an outer membrane composed of lipopolysaccharides. Interestingly, several genes for lipopolysaccharide and lipid A biosyntheses are missing [2]. A complete pathway for peptidoglycan synthesis was also not present. "The lack of a traditional cell wall seems to be a common feature for the family Anaplasmataceae, but not from the order Rickettsiales because the family Rickettsiaceae are capable of synthesizing lipopolysaccharide and peptidoglycan. Unlike other members of the family, A. marginale does not seem to be particularly fragile, and may be able to strengthen its cell in an alternative way."

For energy, Anaplasma marginale undergoes aerobic respiration using the TCA cycle. Anaerobic metabolism, glycolysis, occurs in its cytosol. In vitro tests on organism substrates have shown the use of pyruvate, a glycolytic product, for its metabolism [3]. Even though most of the glycolytic enzymes were detected, a sugar transport system was not found; therefore, the organism may depend more heavily on gluconeogenesis for its glucose supply [2].

Members of its class, Alphaproteobacteria and particularly from the order Rickettsiales, are thought to be the precursors of eukaryotic cell mitochondria. According to the endosymbiotic theory, the mitochondria organelle now existent in eukaryotic cells originated as separate prokaryotic organisms, which were taken inside the cell as endosymbionts [4].

Anaplasma marginale is endemic to topical and subtropical regions of the world. Its greatest ecological impact prevails as a worldwide livestock pathogen that impacts animal health and concomitant economic health.

A. marginale is the most pathogenic of its species causing anaplasmosis, which is a form of tick fever carried by specific cattle tick species. The pathogen multiplies within the tick and can be pass to later stages of the tick's life cycle, but the infection is not passed to the eggs. As carriers, ticks are unaffected by the bacteria; they infect cattle by feeding off the blood of a host. Because the adult male tick is more mobile and lives longer than other stages, it is the most likely stage to transmit the disease. Biting flies can transmit the disease, but are less efficient vectors than ticks [7].

The disease begins its course by invading and multiplying within red blood cells of the host (i.e. cattle). The gram-negative bacteria produce endotoxins through its lipopolysaccharide outer membrane. As the disease progresses, infected and even uninfected red blood cells are destroyed predominantly in the liver and spleen, resulting in increasing anemia and, in severe cases, death of the host. [7]

Cattle that recover from anaplasmosis remain carriers of the organism but are immune to further disease. Calves from immune mothers receive maternal antibodies against A. marginale from milk. These calves eventually also develop a lasting immunity; therefore, it is possible to have both Anaplasma marginale and cattle ticks present in a livestock environment without fear of serious infection outbreaks [7].

Studies conducted in this organism aim at finding vaccines against the bacteria and its relatives of the order Rickettsiales, which are pathogens for both animals and humans.

Because of its damaging, pathogenic nature, much of the current research on this organism is on finding effective vaccines against Anaplasma marginale and its relatives.

For efficient tick-borne transmission of the bacteria, there are at least two specific barriers, the midgut and salivary glands. “An inability to colonize the midgut epithelium prevents subsequent development within the salivary glands and thus prevents transmission of the A. Marginale to the host.” [8] Understanding the complexity of the pathogen-tick interaction can open up novel methods of preventing infections.

“Within the mammalian host, the bacteria generate antigenic variants by changing a surface coat composed of numerous proteins… the surface coat is dominated by two families containing immunodominant proteins: the msp2 superfamily and the msp1 superfamily” [2]. Membrane surface proteins can be useful as microbial identifiers and therefore act as antigens eliciting an immune response. Safe vaccine possibilities currently include testing if recombinant major surface protein antigens will produce an effective immune response to protect the animal from future infections [9].

To add to the difficulty of creating an effective vaccine, the USDA Agriculture Research Service is currently studying the outer membrane protein complex of Anaplasma marginale that includes protection-inducing proteins. The recombinant-based vaccine would be more effective at targeting this cattle disease as it takes into account possible protection mechanisms of the organism [10].