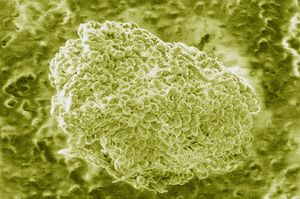 Anthracimycin is an antibiotic that is able to kill gram-positive bacteria, namely anthrax (Bacillus anthracis). In addition, a chlorinated variant has shown activity against certain gram-negative bacteria. It also may be able to kill the gram-positive bacterium methicillin-resistant Staphylococcus aureus (MRSA), and therefore is an extremely relevant research topic. MRSA is a growing problem in the modern world, so a new antibiotic that defends again MRSA would be a revolutionary discovery. Professor William Fenical, along with his team of researchers, discovered the compound in 2012 in an ocean microbe off the shores of Santa Barbara, California. Due to its recent discovery, there are still many unanswered questions about the structure and function of anthracimycin. It has not yet been approved for medical use or even tested on living subjects, but studies thus far suggest it may be in the future.

Anthracimycin is a metabolite derived from an ocean microbe called Streptomyces sp. Streptomyces is a genus which belongs to the order Actinomycetales (1)</sup>]. This order is classified by gram-positive bacteria which are known for producing antibiotics, anticancer agents, and immunosuppressive agents (2)</sup>]. Streptomyces is a very common and useful genus of bacteria; its compounds contribute to approximately 75% of commercially produced antibiotics and about 50% of naturally occurring antibiotics. The genus Streptomyces contains hundreds of different species, which can vary greatly in metabolite production and other basic characteristics (3)</sup>]. 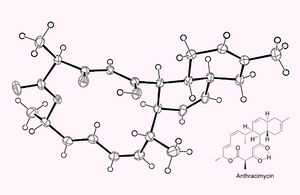 Anthracimycin, according to Professor Fenical, has a "new and unique chemical structure" (4)</sup>]. New antibiotics do not often have completely unique structures, which is what makes the discovery of anthracimycin particularly important. In its pure form, anthracimycin is a white solid with the chemical formula C25H32O4. It is composed of three rings: one has fourteen carbon atoms, and two have six carbon atoms each (5)</sup>]. These rings are of a polyketide origin, which simply means that they contain multiple ketone groups. Ketones contain carbonyl groups connected to carbon atoms in the middle of a carbon chain. (6)</sup]>.

Although anthracimycin has a unique structure, it is closely related to a compound called chlorotonil A. Chlorotonil A is a rare metabolite derived from a terrestrial bacterium called Sorangium cellulosum (7)</sup>]. It differs in structure from anthracimycin in that it contains two chlorine atoms and it has a slightly different carbon skeleton (5)</sup>]. The bioactivity of chlorotonil A has not yet been determined, but the most recent research suggests that it may have uses similar to anthracimycin (8)</sup>].

Method of Action and Potential Uses 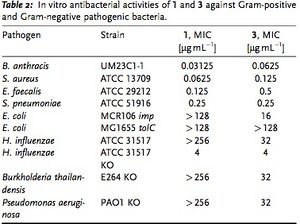 The method of action of anthracimycin is not yet determined. Scientists initially hypothesized that it inhibited DNA/RNA synthesis, but follow-up studies concluded that this hypothesis was unlikely (5)</sup>]. Another possible method of action has not been proposed.

Anthracimycin has been shown to effectively kill gram positive-bacteria. In its pure form, it has shown limited to no antimicrobial activity against gram-negative bacteria (5)</sup>]. It has proven effective against the spore-forming bacterium Bacillus anthracis, which causes an infectious disease called anthrax. This bacterium has been used most notably as a potent bioterrorism weapon, but it is most common in people who handle farm animals. Anthrax is rare but potentially lethal, and can require months of treatment with multiple antibiotics (5)</sup>]. Therefore, discoveries of new antibiotics to treat anthrax are medically significant.

Anthracimycin also showed antimicrobial activity against multiple other species of staphylococci, enterococci, and streptococci. Based on this action, scientists predict that it may be able to kill MRSA, another gram-positive bacterium. MRSA is most commonly acquired in hospital settings, but outbreaks can also arise in communities. It is known for its astonishing capacity to develop drug resistance. Not only is MRSA resistant to methicillin, it is also resistant to an entire class of antibiotics called beta-lactams. Alarmingly, in recent years, cases were documented where strains of MRSA was resistant to the antibiotic vancomycin, which is considered one of the "drugs of last resort." Although vancomycin-resistant strains are extremely rare at this point, future evolution presents the frightening possibility of the development of an entirely drug-resistant bacterium. (11)</sup>]

Research on anthracimycin is still in the early stages. Further research will have to include animal testing (5)</sup>]. If that is successful, anthracimycin may be effective and safe for human use. The antibiotic shows promising potential against gram-positive bacteria, and its chlorinated derivative shows potential against gram-negative bacteria. The marine origin of anthracimycin suggests that the oceans may be a new location to find medically important materials. There are likely a vast number of undiscovered marine microbes with new chemical structures. The discovery of new antibiotics is key to staying ahead of bacterial evolution so that treatments against infections remain effective.