Difference between revisions of "Apicomplex"

A Microbial Biorealm page on the genus Apicomplex 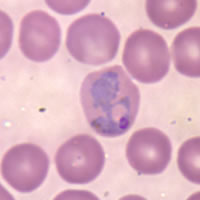 Sporogony occurs when the parasite is injected into the host by the vector. Asexual reproduction occurs, resulting in sporozoites. Another asexual replication follows this, called merogony, where the sporozoites become merozoites. Merogony may occur a number of times and in various locations in the host; these variations vary depending on the species. Sometimes sexual instead of asexual reproduction may occur; this is referred to as gametogony, gamogony, or gametogenesis. Regardless of the title, gametes are formed, which then combine to form zygotes. The zygotes morph into a form which yields sporozoites, starting the cycle over.