A Microbial Biorealm page on the genus Apple mosaic virus 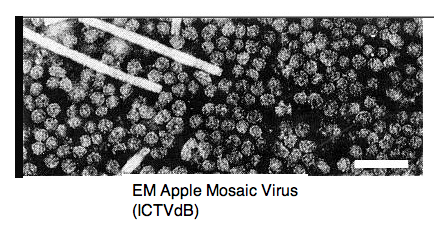 The apple mosaic virus(ApMV) is the cause of apple mosaic disease. The apple mosaic virus is the most widespread apple virus. An apple tree infected with the ApMV will display symptoms of pale to bright cream spots on the leaves. The infected leaves may be depicted throughout the whole tree or only on a single tree limb. The ApMV mostly infects U.S apple tree malus domestica. The apple is the most widely grown fruit crops, therefore an understanding of the pathogen is economically important to commercial apple cultivars. An infected apple tree may have a crop yield reduction of up to 60%. (7)

The apple mosaic virions consist of an non-enveloped capsid. The capsid is round, pleomorphic shaped, and exhibits icosahedral symmetry. The isometric capsid has a diameter of 25nm and 29nm. The capsomer arrangement is not obvious. (6)

The apple mosaic virus is a plant virus that mostly commonly infects Malus domestica and Malus ssp. in the United States of America. (6) The ApMV is a pathogen with a diverse natural host-range besides apples. The ApMV naturally infects rose, hazelnut, filbert, horse chestnut, raspberry, birch, and hops. The amino acid squences encoded by RNA 1 and 2 are similar to other ilarviruses, but they are closely related to alfalfa mosaic virus. (1) The ApMV RNA 4 is closely related to alfalfa mosaic virus and tobacco streak virus. (9). The ApMV is serologically related to Prunus necrotic ringspot virus. The virus does not show relationship to Tulare mosaic virus, prune dwarf virus, citrus variegation, citrus leaf rugose, Asparaguse 2, and elm mottle virus. (6)

The virus is spread through root grafting and mechanical inoculation.

Firstly, the research performed by multiplex RT-PCR assays for detection of four apple virus. The apple chlorotic leaf spot virus, apple stem pitting virus, apple mosaic virus, and apple stem grooving virus were all studied by RT-PCR assays. The RT-PCR assay of two identical multiplex were used for exchange of virus specific primers. The specific coamplification of plant mRNA was an internal control to ensure reliability of results. The most commonly used techniques for the four distinct diseases were ELISA tests and woody indicators. The ELISA tests often fail because of low virus titer; while the woody indicators are time consuming and expensive. The use of RT-PCR assay for detection of the four common apple virus is a fast, reliable, and inexpensive technique. This technique may replace the commonly used ELISA or woody indictor technique used for the four common apple pathogens. (7)

The second research was the characterization of the complete nucleotide sequence of apple mosaic virus RNA 1 and RNA 2. Since the isolation of ApMV has been difficult, the goal of the research was to sequence the ApMV entire genome. The ApMV was isolated from infected apple trees, Malus domestica. The virus was propagated, purified, and centrifuged for RNA purification. The ApMV purified RNA was used as a template for synthesized cDNA. Through a series of procedures the nucleotide sequence of ApMV RNA 1 and ApMV RNA 2 was determined. The characterization of the ApMV RNA 1 and ApMV RNA 2 resulted in a relationship to alfalfa mosaic virus. The sequencing of the entire genome will allow for detection and further studies of the pathogen. (1)

The third research was the complete nucleotide sequence of Apple Mosaic Virus RNA 4. The nucleotide sequencing of ApMV RNA 4 was obtained by cloning cDNA’s and direct sequencing of the 5’ terminus RNA. The ApMV was sequenced directly by reverse transcriptase. The analysis of the obtained ApMV RNA 4 sequence revealed similarities to the RNA 4 of alfalfa mosaic virus and tobacco streak mosaic virus. The features of the ApMV RNA 4 observed are characteristics of the ilarviruses and developed on the idea of the ‘ genome activation’ being dependent on secondary and tertiary structures. (9)

Edited by student of Emily Lilly at University of Massachusetts Dartmouth