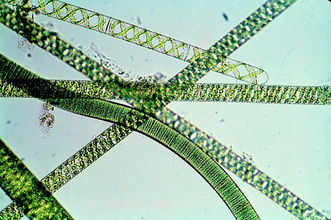 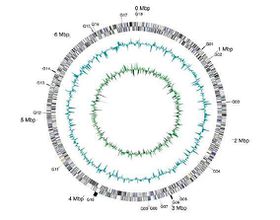 Figure 3: Schematic representation of the A. platensis circular chromosome- From outside to inside, the circles show gaps in the genome, predicted protein-coding genes, G+C content, and GC skew. Source:(14)

In March 2010, Arthrospira platensis became the first filamentous, non-N2-fixing cyanobacterium to have its genome sequenced and published(3). The genome consists of a single, circular chromosome and was found to be 6.8Mb in size with 44.3% G-C content(3). There were 6630 protein-coding genes detected, as well as 49 RNA genes, including 2 sets of rRNA genes and 40 tRNA genes(3). When looked at in its entirety, 78% of the species' genes showed similarity to genes with known function in other organisms, while 22% of the genome is made up of unknown genes(3).

A. platensis inhabits tropical and subtropical bodies of water with high pH (8-11) as well as high levels of carbonate and bicarbonate. The preference of an alkaline marine environment means that this bacteria can be classified as an alkaliphile. It is a free-floating species that tends to aggregate and form mats along the periphery of the aqueous environment. It is found mainly in African lakes, such as Lake Magadi, but also in Asian and South American regions(4). Aside from being found in naturally in these areas, it is also grown commercially for its use as a food additive(10). The bacteria are typically grown for the food industry in large, lined pools that can either have direct access to light or are placed under large lamps. Conditions for optimal growth of A. platensis have been analyzed and include standard mineral nutrient, a temperature range of 30-34 degrees C, pH range of 8.5-11, and a sodium light lamp(9). The maximum growth of the species is achieved on the fourth or fifth day of cultivation(9).