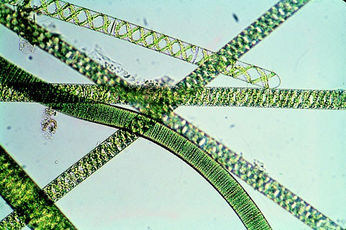 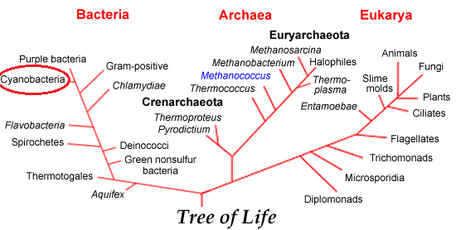 Figure 2: A. platensis is a member of the Cyanobacteria phylum, indicating that it is able to obtain energy through photosynthesis and has a blue-green color. Source:(14)

Arthrospira platensis, also known as Spirulina, is a gram negative, non-toxic species of cyanobacteria with a wide array of uses in the natural and commercial world. Its inclusion with the phylum Cyanobacteria as seen in Figure 2 indicates that A. platensis has a characteristic blue-green color (giving the prefix "cyano-") based on the wavelengths of light that it is able to absorb. While many bacteria are known for their pathogenic effects, A. platensis is primarily known across the world for its potential nutritional value. It is one of the rare edible bacteria due to its low purine concentration, which allows it to pose very minimal risk of uric acid build up in the body(12). Historically, it is known to have been regularly consumed by the Aztecs and tropical climate populations where it was often dried into flat patties for easy consumption(3). Because of its anti-carcinogen properties, it was also used to treat radiation sickness in people that were affected by the 1986 Chernobyl nuclear accident(9). More recently, the consumption of this species has been shown to lower blood pressure and reduce cholesterol, which are two of the most prevalent health concerns in the modern world(10). The food industry classifies A. platensis as a single-celled protein, meaning that it is an edible microbe with a high food value(12). It is rich in vitamins, minerals, beta-carotene, essential fatty acids, and antioxidants, all of which have facilitated its commercial production as a human food supplement over the course of the past decade(13). It also has very high protein content with a well-balanced composition of all essential amino acids, making it even more desirable as a food supplement(9). 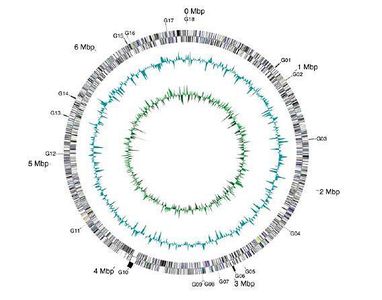 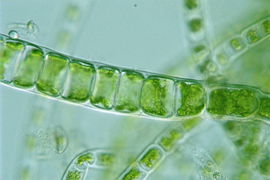 Figure 4: When viewed under a microscope, cells within A. platensis trichomes are short and wide and have visible cross-walls. Source:(14)

A. platensis inhabits tropical and subtropical bodies of water with high pH (8-11) as well as high levels of carbonate and bicarbonate. The preference of an alkaline marine environment means that this bacteria can be classified as an alkaliphile. It is a free-floating species that tends to aggregate and form mats along the periphery of the aqueous environment. It is found mainly in African lakes, such as Lake Magadi, but also in Asian and South American regions(4). Aside from being found in naturally in these areas, it is also grown commercially for its use as a food additive(10). The bacteria are typically grown for the food industry in large, lined pools that can either have direct access to light or are placed under large lamps. Conditions for optimal growth of A. platensis have been analyzed and include standard mineral nutrient, a temperature range of 30-34 degrees C, pH range of 8.5-11, and a sodium light lamp(9). The maximum growth of the species is achieved on the fourth or fifth day of cultivation(9). At that time, the bacteria are harvested, dried into a powder, and either packaged into capsules or compressed into tablets for easy distribution.