A Microbial Biorealm page on the genus Aspergillus 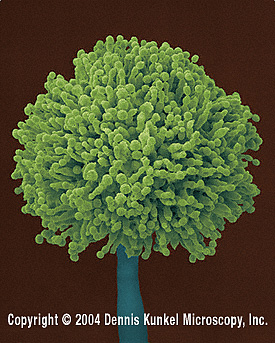 A. fumigatus is also an extremely dangerous pathogen, causing aspergillosis. A. niger is less dangerous. Although most of these organisms only cause severe illness in immunocompromised individuals, even otherwise healthy people may become infected; aspergillosis is often fatal. These illnesses are common among people who work in the farming industry, and are considered an occupational hazard. In addition, the diseases they cause, such as invasive pulmonary aspergillosis, are difficult to diagnose. Another ailment, allergic bronchopulmonary aspergillosis (ABPA), is a hypersensitivity disorder. It typically occurs in people with asthma or cystic fibrosis. Other diseases include: chronic necrotizing pulmonary aspergillosis, and allergic fungal sinusitis. These pathogens can attack any part of the body, from the sinuses to the lungs to the kidneys. Two Aspergillus species, A. flavus and A. parasiticus, are known to produce toxins only at acidic levels of pH. However, a West African strain of A. flavus actually produces less. In 2001, the Aspergillus Trust charity was formed to raise awarness for these diseases and support patients who are suffering from Aspergillus-related illnesses.

Three Aspergillus genome manuscripts were published in Nature in December 2005 thus establishing Aspergillus as the leading filamentous fungal genus for comparative genomic studies. Like most major genome projects, these Aspergillus efforts were collaborations between a large sequencing centre and the respective community of scientists. The Institute for Genome Research (TIGR) worked with the Aspergillus fumigatus community. A. nidulans was sequenced at the Broad Institute. A. oryzae was sequenced in Japan at the National Institute of Advanced Industrial Science and Technology. The Joint Genome Institute ( JGI) of the Department of Energy has released sequence date for a citric acid-producing strain of A. niger. TIGR, now re-named the Venter Institute is currently spear-heading a project on the A. flavus genome. (Bennett, 2010)

An interesting finding coming out of the A. flavus genome project is its close sequence similarity and genomic architecture to that of A. oryzae genome. The high genomic identity confirms the taxonomic description of A. oryzae as a domesticated member of the A. flavus-oryzae group of yellow-green aspergilli. But the two species have very different consequences for human society. A. flavus produces aflatoxin and is a pan-kingdom pathogen capable of causing serious disease in plants, insects and vertebrates. A. oryzae is less toxigenic, and is widely used in human food and beverage preparations; nevertheless, the species does produce some lesser toxins (E. Schuster et al., 1992).

DNA data permit inferences about the comparative biology of Aspergillus species so as to reconstruct possible scenarios for the evolution of mating types, secondary metabolite clusters, enzymes involved in biomass degradation and other important pathways. Comparative genomics data can be leveraged to characterize biosynthetic processes. Using microarrays and proteomics technology, expression levels are being studied. Together with advanced bioinformatics and data analysis tools, new insights are being gained into the functional properties and activities of Aspergillus fungal genomes. (Bennett, 2010)

Like other members of Ascomycota, Aspergillus species can reproduce both sexually and asexually, although asexual reproduction predominates in most species. 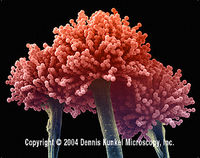 Aspergillus species are sometimes used to manufacture chemical and biological products. A. niger produces most of the world's citric acid, a common preservative for foods, detergents, and industrial products. Many common foods and beverages, such as soy sauce, chocolate, soft drinks, vitamins, black tea, and fruit juice undergo a fermentation process with Aspergillus. Unfortunately, this may have negative effects on immunocompromised individuals, who are advised to stay away from food products which have undergone this process.

A non-carcinogenic, aflatoxin-free strain of Aspergillus flavus, A. flavus AF36, is used as a component of pesticides. The AF36 strain is applied to the soil and germinates, out-competing aflatoxin-producing strains of A. flavus.