A Microbial Biorealm page on the genus Aspergillus niger 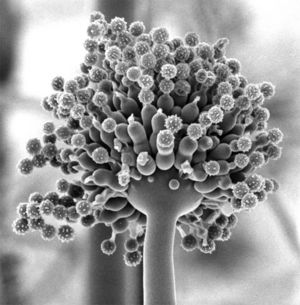 Aspergillus niger is a haploid filamentous fungi and is a very essential microorganism in the field of biology. In addition to producing extracellular enzymes and citric acid, A. niger is used for waste management and biotransformations. The fungi is most commonly found in mesophilic environments such as decaying vegetation or soil and plants. (2)

Genome sequencing of A. niger is important because of its involvement in producing citric acid as well as industrial enzymes, such as amylases, proteases, and lipases. The use of these enzymes are essential because of its importance for transformation to food enzymes. Other properties of this species include pathogens that cause the spoilage of food and production of secondary metabolites, such as aflatoxin, that are toxic. Metabolite production, involvement in food spoilage, and simply being a pathogen creates a great economic impact on the U.S. (roughly $45 billion on the U.S. economy alone). Understanding this economic importance as well as the effects it makes on the environment makes the genome sequencing of A. niger essential to biological applications.(4, 5)

A. niger was isolated from the plant Welwitschia mirabilis in Namibia and Angola, a plant estimated to be about 3000 years old. A. niger is easily isolated from common thing such as dust, paint, and soil. Commonly in labs, A. niger is isolated via chemostat cultures which can test positively or negatively for the fungi. (3, 6)

A. niger have a total genome size that ranges from 35.5 to 38.5 Mb and is composed of about 13,000 genes. Of these genes, about 8000 to 8500 genes have functional assignments. In addition, about 14,000 open reading frames (ORF) were identified in the genome which could potentially encode a protein. The DNA sequence of A. niger consists of approximately 33.9 million base pairs. The possible function of 6500 genes could be established which is only about 45% of its total gene count.(7)

Electrophoretic karyotyping of A. niger allows the visualization of chromosomes separated into four separate bands. The chromosomal bands range from 3.5 to 6.6 Mb. The karyotype sequence that was obtained could be arranged into 19 separate supercontigs that correspond to eight linear chromosomes.(7)

The recombinant DNA contains a replicon which allows for replication in a bacterial host. The recombinant DNA consists of a plasmid vectors pDG1 (ATCC 53005) and pDG3 (ATCC 53006). Transformation of these vectors includes removing the cell wall enzymatically, adding exogenous DNA to the spheroplasts, and incubating so the spheroplasts take up the DNA. Once this process is complete, isolation of the A. niger transformant is possible.(8)

The study of transformation in A. niger is one that requires DNA from the filamentous fungi which contains the plasmid vector p3SR2. Studies show that every experiment involving p3SR2 involves fragments of vector sequences as well as fragments of the recombinant vector. In the T31-6 transformant of A. niger, six different plasmid-probed bands were analyzed and recloned in E. coli. This technique showed that recombination resulted in many different cases of insertions and deletions. The single plasmid, in a pool of 402 different plasmids, that was identified and isolated was one that included the DNA of A. niger. Therefore, results show that the integration of p3SR2 in the genome happens solely at a single site. (8)

A. niger produce colonies that are composed of white or yellow felt that is covered by dark asexually produced fungal spores. Mycelial, or threadlike, hyphae are divided by a septum and transparent. Conidiophores (asexually produced fungal spores) of A. niger usually range from 900-1600 µm in length and contain globose (globular) vesicles ranging from 40-60 µm in diameter. Each globose vesicle is completely covered with biseriate phialides which are projections from the conidiophore of A. niger. These phialides come out from brown metulae, which is the site where a conidiogenous cell is created. The phialides go through a process of blastic basipetal conidiogenesis to create globose mitospores, which have a diameter that ranges from 3 to 5 µm. (7)

A. niger has a metabolic system which is composed of the cytoplasm, mitochondria, and peroxisome. Incorporated in this system are carbohydrate metabolism and amino acid metabolism which take place in both anabolic and catabolic reactions. For the most favorable growth rate, linear programming was used. Linear programming was combined with 37 other metabolites in order to test for different flux distributions in those metabolites. By using the technique of logarithmic sensitivity analysis, it is shown that the amino acids proline, alanine and glutamine prospered in this environment. The amino acid tyrosine had no effect; however it has the possibility of helping with biomass manufacture. In addition to this, four other amino acids caused a 44% increase in biomass manufacture and a 41% increase in recombinant protein production. (15)

One of the most common ways that A. niger gains energy is through bioleaching. Bioleaching is the process of extracting metals from ores via the use of bacteria. A. niger gains its energy by breaking down the minerals into its most basic element. This fungi specifically is able to break down copper, tin, aluminum, nickel, and lead, and with this energy is able to produce oxalic acid, gluconic acid, and citric acid. (9)

Different reactions and pathways are used whenever A. niger consumes a substrate or forms a metabolic product. Chitin, for example, makes up the cell wall of A. niger, however the only enzymatic steps that are used to create chitin are those catalyzed by glutamine-fructose-6-phosphate transaminase as well as chitin synthase. (10)

One of the most important products that A. niger produces is citric acid. Under conditions of citric acid accumulation, the metabolism of A. niger is slightly altered. In normal conditions metabolism of the fungi progresses at a linear rate. In this linearly progressive state, production of citric acid is high, however there is still an opportunity for changes which can lead to a five fold increase in basal rate synthesis. Again, this value can be further increased with a doubling in enzyme concentration. Doubling the concentration allows at least a 12 fold increase in citric acid production and a maximum of a 50 fold increase when enzyme concentration is 10 times its normal value. Under optimal conditions, at least 13 enzymes need to be altered in order to obtain a maximum in citric acid production.(11)

A. niger is usually found in common mesophilic environments such as soil, plants, and enclosed air environments. A. niger is not only a xerophilic fungi (mold that doesn’t require free water for growth, can grow in humid environments), but is also a thermotolerant organism (capable of growing at high temperatures). Because of this property, the filamentous fungi exhibits a high tolerance to freezing temperatures. (2)

A. niger is relatively harmless compared to other filamentous fungi. Despite this fact, there have been some medical cases that have been accounted for, such as lung infections or ear infections in patients that have an weakened immune system, or an immune system that has been impaired by a disease or medical treatment. In the case of ear infections, A. niger invades the outer ear canal which can cause damage to the skin it came in contact with. (2, 4)

This species of filamentous fungi produces several secondary metabolites, one of the most important being ochratoxin A. Ochratoxin A is an abundant food-contaminating mycotoxin. Human contact with this toxin usually occurs through consumption of food which has not been stored and taken care of appropriately. Nevertheless, studies have shown that less that 10% of the A. niger strains were tested positive for ochratoxin A under conditions that were favorable. (2)

The productioin of ochratoxin A from A. niger, is liable to cause immunotoxcitiy in animals. The effects on animals include a decrease in antibody responses, a size reduction in immune organs, and an alteration in the production of cytokine which are proteins and peptides specifically used in signaling. Food that has been contaminated by A. niger’s toxic metabolite has had a major affect on the poultry industry. Different animals, such as chicken, turkey, and ducks, are very prone to ochratoxin. (2, 4)

A. niger has been a very important microbe used in the field of biotechnology. Many of the enzymes produced by A. niger, such as citric acid, amylases, lipases, cellulases, xylanases and proteases, are considered GRAS (generally recognized as safe) by the United States Food and Drug Administration and is excused from the Federal Food, Drug, and Cosmetic Act food additive tolerance requirements. Even though it is considered GRAS, A. niger still must be treated safely and with care. (2, 6)

A. niger has also been used for waste treatment and chemical modifications known as biotransformations. In the past 20 years, A. niger has been used as a host for transformation to food enzymes. However, it is still important to treat this fungi very carefully to avoid formation of spore dust which can cause illness (see pathology). However, checking for ochratoxin A, a mycotoxin, can reduce any risks and will yield A. niger as a safe organism.(2, 6)

Phytases have the property of catalyzing phosphate hydrolysis from phytate. Phytate is used for absorption by animals. In normal circumstances, A. niger PhyB has an optimal catalytic activity at an average pH of 2.5. This poses a problem since the pH of animal’s stomachs range from 3.0 to 3.5. In order to shift the pH optimum of A. niger PhyB, modification of the substrate specificity site must be performed. Mutants (E272K, E272Q) were used which affects the substrate specificity site, and results showed that mutant E272K shifted the pH optimum from 2.5 to 3.2. From this, it is possible to change the pH optimum to mirror that of the stomach which will result in a greater substrate attraction. (12)