Difference between revisions of "Bacillariophyta"

A Microbial Biorealm page on the phylum Bacillariophyta 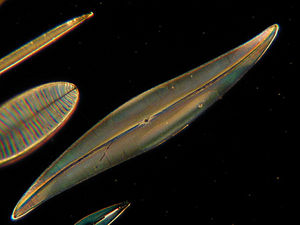 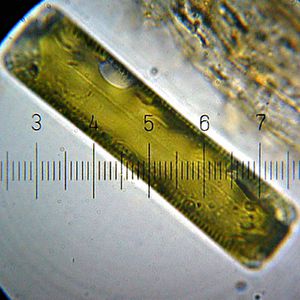 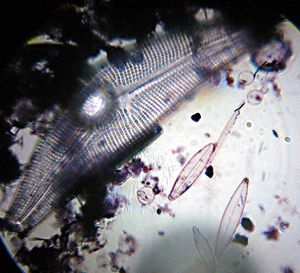 Some diatoms, ranging in size from about 20 µM to 140 µM in length.
Photograph by Bob Blaylock.

The U.S. Department of Energy did the first research on a genome for diatoms on the species Thalassiosira pseudonana. It showed, after detailed DNA analysis that diatoms evolved when a heterotroph, a single-celled microbe, engulfed a kind of red alga. The two became one organism, a process called endosymbiosis, and swapped genetic material creating a new hybrid genome. Thalassiosira pseudonana has 34 megabase pairs which encode approximately 11,400 proteins also 129,00 base pair plastid and 44,000 base pair mitochondrial genomes.(For information on the genome project click here.) 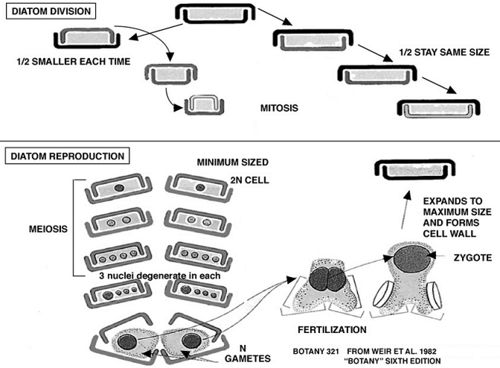 Diatoms are set up with a cell wall made up of silica and the diatom itself is a single-celled photosynthetic protist. Very little is known about how the cell wall is made, but scientists are researching it to hopefully find a way to reproduce the thin glass-like wall for nanotechnology. Diatoms are autotrophs, which means that they are able to produce their own sugars, lipids and ameno acids. During asexual reproduction, the diatom cell size progressively decreases as each valve produces a smaller complementary valve. When the smaller valves have completely formed the two cells must divide; but because one side of the the diatom is smaller, when they split one is the same size as the original, while one is smaller yet. When they shrink to a certain size, they have to reproduce sexually. To do this they develop an auxospore which then will become a diatom (see diagram above). 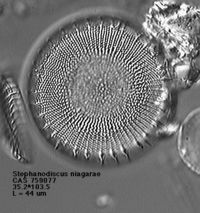