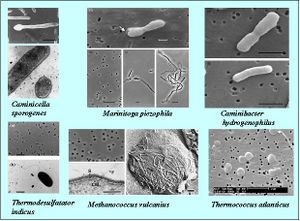 This is my friend Clay. Remove this or replace with your own files and captions.

Bacillus amyloliquefaciens is a gram positive soil bacteria closely related to the species Baciullus subtilus. The two species share many homologous genes and appear so similar it is not possible to visually separate the two species. [1] This species is also the source of the commercially available restriction enzyme BamHI which cuts at the palindrome CGATCC. [2]

Bacillus amyloliquefaciens are gram positive rods with peritrichous flagella allowing motility. The cells often appear as long chains unlike many other Bacillus species that form as single cells. The optimal temperature for cellular growth is between 30 and 40 degrees Celsius. Similar to other Bacillus species, B. amyloliquefaciens forms endospores allowing survival for a long period of time. Endospores appear centrally in the cells which do not have a swollen appearance. [1]

Page authored by Michael Muradian, student of Mandy Brosnahan, Instructor at the University of Minnesota-Twin Cities, MICB 3301/3303: Biology of Microorganisms.