A Microbial Biorealm page on the genus Bacillus thuringiensis

B. thuringiensis (Bt) is a gram-positive, soil-dwelling, spore-forming, rod-shaped bacteria. It is approximately 1 µm in width and 5 µm in length.[3][11] It grows at body temperature and produces a diamond-shaped crystal from its crystal proteins (Cry proteins) and uses it to fend off insects, predators, and other pathogens.[2]

Its genome was recently sequenced (February 23rd, 2007) [11]. It is critical to have B. thuringiensis' genome sequenced because it has many benefits for humans in the form of agriculture. Bt is the most common environmentally-friendly insecticide used and is the basis of over 90% of the pesticides available in the market today.[1] Having sequenced the entire genome, scientists can witness and determine how mutations can create different variant strains that may eventually grow stronger against agricultural pests. In 2005, over 26 million hectares of Bt-enduced transgenic corn and cotton were planted.[10] Many pests were exterminated because the Cry protein family has many flexible toxin variants. B. thuringiensis pesticide S-layer (where the Cry protein and toxins lie) has no known negative effects on humans, vertebrates, or plants.

Many studies indicate and consider B. thuringiensis and B. cereus to be one species. However, their phenotypes greatly differ in that Bt produces crystal proteins despite the fact that crystal protein synthesis is controlled by plasmid genes which can be susceptible to loss and transmission to related bacteria. One response is that Bt strains produce enterotoxins (toxins released by micro-organisms in the lower intestine) that are involved in B. cereus pathogenesis and therefore signifies a fine-line between the two species.[1]

B. thuringiensis has a circular chromosome and a GC-content of approximately 32%~35%. It has a genome size of between 5.2–5.8 Megabases.[11] It is a facultative anaerobic organism (an organism that makes ATP by aerobic respiration if oxygen is present but can also switch to fermentation). It has many plasmids and Bt's strains harbors a diverse range of plasmids that vary in number and in size (2–200kb).[14] The self-replicating plasmids are important to the organism's lineage and lifestyle.[11]

The largest class of genes consists of the "δ-endotoxins" (from the Cry proteins), which often are produced as 130–140 kDa protein precursors in the insect gut under high-pH conditions to yield a 60–65 kDa biologically active core toxin.[1] These δ-Endotoxins are frequently expressed in recombinant cotton, potatoes, rice and corn. These "δ-endotoxins" from the plasmids may be more than 50kb long and self-transmissible via a conjugation-like mechanism.[7]

Because B. thuringiensis is gram-positive, it has a thick cell wall that is comprised of peptidoglycan (amino acid polypeptide and a sugar). Between the cell wall and the plasma membrane is a small section called the periplasmic space which is essential for biosynthesis and protection.

Most research has been focused on the Cry toxin crystals. Though they are many strains that differ in "insecticidal spectra and divergence in amino acid sequences"[20], the Cry proteins' activity is similar. The most salient Cry toxin and best studied is the Cry1 subclass. It is comprised of three distinct domains. Domain I (residues 33 to 253) contains eight alpha-helicies and no beta-sheets. Domain II (residues 265 to 461) contains three anti-parallel beta-sheets and two short alpha-helicies. Domain III (residues 463-609) contains a beta-sandwich of two anti-parallel beta-sheets.

The optimal condition for the Cry toxin to grow and sporulate is in the insect's alkaline gut.[20] This facilitates the ability to infect insect guts. The following is a summary of the life cycle of Bt. Stage I: axial filament formation; Stage II: forespore formation; Stage III: engulfment; Stage IV-VI: formation of cell wall, cortex, and spore coats accompanied by transformation of the spore nucleoid; Stage VII: spore maturation.[15] 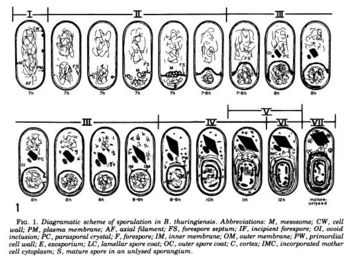 Several studies have been done on animals to test the effects of B. thuringiensis. When treated with Bt176, a corn hybrid strain of B. thuringiensis, experiments with broilers or laying hens showed no pathology was attributed. Researchers discovered neither feed intake, feed conversion ratio, nor weight gain were influenced by the genetic modification of the crop.[21] High concentrations of Bt in fish and aquatic organisms failed to show any adverse effects . Experiments performed on other animals showed similar negative results. Conclusion: There seems to be no adverse effects on non-target organisms when exposed to Bt.[22]

Effects on the environment are largely considered mild.[22] It is a soil bacterium and thrives at body temperature.[17] When exposed to higher temperatures such as sunlight (UV light), however, its half-life greatly decreases to around 3.8 hours. As soon as it is exposed to a warmer-than-normal medium, B. thuringiensis' spores start deteriorating and lose viability within four days. Normally, a short half-life is bad. But in Bt's case, it is actually good in that the short half-life minimizes insect resistance.[22] Additionally, when field tests were performed on a sample of transgenic corn, researchers discovered better protection from root damage by Western corn rootworm than by chemical pesticides.[7]

Common insect targets are "moths, mosquitoes, blackflies, beetles, hoppers, aphids, wasps and bees as well as nematodes"[17][18][19]. The toxicity and virulence lies in the crystals. The virulence of the Cry toxins is mediated by a cadherin receptor (a class of transmembrane proteins that play important roles in cell adhesion), BT-R1, which has been identified gut of many pathogenistic larvae. Here is a rough process on how B. thuringiensis causes disease. (1). B. thuringiensis is digested and the toxins are mixed with the high pH (basic conditions) to bind specific receptors in the gut to attack the host insect. (2). This process punches holes in the gut-lining and thus, the insect becomes weak. (3). As the gut is continuing to break down, spores begin to germinate from the toxic crystals and other bacterial pathogens start to infect the host. (4). B. thuringiensis spores are continuously weakening the host and the insect dies soon thereafter.

The Bacillus thuringiensis toxin is species-specific and non-pathogenic to humans.[5] Specifically, however, Bt targets pests in the orders Lepidoptera, Coleptera, and Diptera.[18] The Cry crystal toxins contain proteins that are highly toxic towards invertebrates but nontoxic towards vertebrates.[8] There are different variant strains of B. thuringiensis Cry toxin that effect different hosts. Despite this variability, there is still a high degree of structural conservation among Cry toxin which suggests that "they possess a fundamental mechanism". All Cry variants follow a similar two-phase mechanism when infecting the host: (1). solubilization and proteolytic activation in the gut and (2) binding to the intestinal cells with pore formation.[9]

Bacillus thuringiensis produces the Cry crystal toxin that attacks the gut of pests and kills them internally. These Cry toxins are good agricultural tools for growing plants. Instead of using chemicals that may have adverse effects on humans, genetic engineers integrate the Bt toxin into the plant's genome. These Bt Cry toxins are safe for humans and kill off species of pests that are susceptible to the Bacillus thuringiensis endospore.

1. Current fortune has enabled humans to thrive without many Bt-resistant pests. Eventually, however, pests will evolve and acquire resistance to Bt. Researchers at the University of California, San Diego are studying how nematodes defend themselves from bacterial attack. Dr. Raffi Aroian and his colleagues attempt to analyze how Cry proteins interact (host-toxin interaction) with gut cells and prevent cell death. Aroian is looking at host responses to the toxin on a genomic scale and look to discover the transcription factors that enable resistance in pests.[24]

2. China is becoming a world-leader in isolating new Bt genes worldwide. Since 1997, Chinese researchers have isolated and discovered 50 new Bt genes. Recently, Chinese scientists have been analyzing the cry8-type genes, which were toxic to a number of colopteran pests and certain scarab species. Researchers used PCR-RFLP (Restriction Fragment Length Polymorphism - a technique in which organisms may be differentiated by analysis of patterns derived from cleavage in their DNA)[23]. Researchers created a clone, labeled it cry8Ca2, and compared the clone with the known cry8Ca1 gene. Although both genes only differed by one amino acid, the biggest difference was a high toxcitiy towards larvae of the scarabaeid insects Anamala exoleta and Anomala corpulenta.[4]

3. It has been theorized that no known adverse environmental effects arise when crops have been spread with Bt. 40% of the corn crop grown in Quebec, Cananda, uses Bt. Researchers from The Environmental Management of Biotechnology for Regulation and Research and Agriculture and Agri-Food Canada want to make fully certain whether the Bt endotoxin and its gene are present in the aquatic environment and if so, in what concentrations. Researchers will also analyze the effects of Bt on the aquatic organisms of the St. Lawrence River.[25]

Edited by Ernest Hsu of Rachel Larsen and Kit Pogliano