Difference between revisions of "Bacillus thuringiensis toxin in C. elegans" 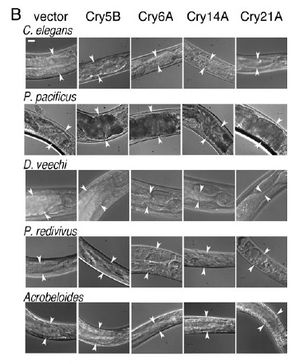 (B) Photographs of the anterior intestine of nematodes fed the four toxic crystal proteins in E. coli. Arrowheads delineate the width of the intestine at position near the anterior. (Bar 5 20 mm.)<http://www.pnas.org/content/100/5/2760.long/> 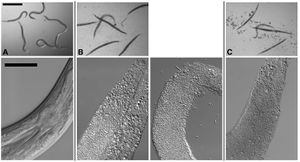 Figure 1. Infection of C. elegans by B. thuringiensis and B. anthracis. Top row: Dissecting microscope view of nematodes cultured under various conditions. Scale bar of images in top row is 500 mm. Bottom row: Compound microscope view of nematodes cultured under various conditions. For all images in the bottom row, anterior of the worm is top right and scale bar is 50 mm. (A) C. elegans cultured in a well with B. thuringiensis without Cry5B. Top row: None of the six nematodes are infected. All are healthy. The blur associated with some of the worms in the top row is due to their movement in the well. Bottom row: The internal structures of C. elegans fed B. thuringiensis without Cry5B, including the pharynx and intestine, are all intact. (B) C. elegans cultured in a well with B. thuringiensis and Cry5B. Top row: Five of the six worms are completely infected (rigid, lack of internal structures and normal coloration); one is not. Bottom row: Infected animals show complete or near complete digestion of internal structures by the bacteria. Vegetative and sporulated bacteria can be seen in these lethally infected animals. (C) Similar images as in (B) except the bacterium cultured with the nematodes is Bacillus anthracis. <http://www.plosone.org/article/info%3Adoi%2F10.1371%2Fjournal.pone.0029122/> 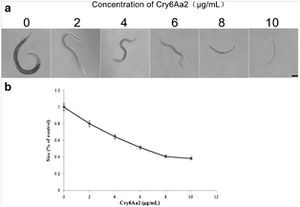 Bacillus thuringiensis as an organism

Bacillus thuringiensis is prevalent in the soil, and is a gram –positive, spore-forming member of the Bacillus ceres group. The Bacillus ceres group is a collection of seven genetically similar species, three of which are so alike that they are occasionally considered the same organism, except for their vastly different pathogenic outcomes (Kho et al. 2011). It is these different pathogens, or external expression of the organism’s phenotype, which are often used by researchers to determine which species are distinct. In the case of B. thuringiensis the organism is typified by the production of specific invertebrate related pathogens (Ceuppens et al., 2013). However, the issue with using phenotypic differences to differentiate among these organisms is that the differences frequently stem from virulence factors contained on plasmids, which are extremely variable and transient. These genetic elements separate from the primary genome can be exchanged through horizontal gene transmission, lost in the environment, or selected against during culturing in the laboratory. Despite the issues with distinguishing strains based upon their ability to cause disease, B. thuringiensis is often distinguished by the ability to form crystal proteins. These products are insecticidal in nature and referred to as cry genes for the genes that code their expression (Ceuppens et al.). In the wild, most strains of B. thuringiensis are capable of producing anywhere from 1-4 types of cry proteins (Kho et al., 2011).The ability to produce multiple cry genes may be explained because of the synergistic effect that some of these proteins have in taking over a host when working together, or because different potential hosts have different levels of susceptibility to specific cry proteins (E. Schnephf, 1998).

It is the ability to produce these crystal proteins that gives B. thuringiensis value as an insecticide and has made it especially interesting to humans who are looking into biological applications of the cry proteins. These toxins have been utilized both in direct application on to crops and as a source of transgenic elements that provide resistance against the orders Lepidoptera, Diptera, and Coleoptera (E. Schnepf, 1998) when incorporated into the genomes of genetically modified organisms. The method of action within this subset of proteins makes them especially effective against insects but hasn’t produced evidence of negative effects against either humans or other higher trophic level organisms, as is typically the case for insecticides. Because of these perceived benefits and the lack of obvious repercussions, the utilization of plants with cry proteins has become common place since 1996, when genetically modified potatoes, corn, and potatoes with versions of cry genes were made commercially available (Schnepf).

The genome of B. thuringiensis has between 2.4 – 5.7 million base pairs and is supplemented extensively by plasmids, both linear and circular in nature. The largest of these additional genetic elements are responsible for the encoding of the crystals released during sporulation (Schnepf).

Cry genes are expressed during the stationary phase of B. thuringiensis’s life cycle, and to such an extensive degree that 20-30% of the dry weight of the organism’s spore is made up of the resulting crystals. The regulation of crystal formation and its relationship with the stationary phase are monitored at three levels of regulation: transcriptional, posttranscriptional, and posttranslational, but not all cry genes are dependent upon the process of spore formation (Schnepf). The geometric structure of the resulting crystals differs based upon the type of cry protein being expressed, ranging from bipyramidal to spherical, although certain cry proteins require accessory proteins to assemble into their correct crystal structure (Schnepf).

The crystals produced by cry genes are made up of potential toxins that become active only when consumed by a susceptible organism. Susceptible organisms are those that have alkaline conditions in a portion of their digestive system, as is the case for the midgut of insects and the intestines of nematodes. Once the crystal has entered the alkali conditions, the toxin begins to work after being made soluble, cleaving by enzymes involved in protein catabolism, and then being inserted into the membrane of the epithelium where it is able to form pores (Schnepf). The success of various cry proteins can sometimes be explained by differences in solubility, and decreasing solubility has been suggested as a reason for increasing insect resistance to the toxin. Once processing is completed, cry proteins are capable of two main functions, the ability to bind to specific receptors on the target organism and to function as an ion channel. Two methods of pore function have been suggested, one where the pore allows non-specific ion transport and another where the controlled transport of specific ions results in undermining of the membrane potential that is necessary for the cell’s normal functioning (Schnepf). The reason that there is debate over the selectivity of the pore is because of the wide range of experimental conditions in which the cry proteins have been tested has resulted in conflicting results. But this inconsistency may be evidence of the pore responding to differing environmental conditions instead of improper scientific experimentation (Schnepf).

There have been recent attempts to systematically alter the structure of the cry proteins in order to improve their functioning from the point of view of those trying to increase the toxin’s insecticidal nature. Although decreasing solubility is the evolutionary means suggested by which insects decrease their susceptibility to the toxins, human efforts have been focused on increasing the amount of irreversible binding, a process typically associated with insertion of the toxin into the epithelial cells of the organism, in order to create more lethal varieties of cry proteins (Schnepf).