In 1996, headlines circulated when scientists announced the evidence of what is claimed to be bacterial fossils in meteorites. The question of extraterrestrial life has been a topic of perennial interest plaguing the minds of filmmakers and fiction writers but only recently has it gathered momentum in the scientific community. Inasmuch, the idea of biological material migrating around the Solar System on small bodies like comets has mainly revolved around two distinct finds: the 1931 Tatahouine meteorite and the unearthing of a Martian meteorite, ALH84001, in Antarctica. In 1996, a controversial publication by the National Aeronautics and Space Administration (NASA) was released that argued for the presence of fossilized nanobacteria on the ALH84001 meteorite – specifically, rod-shaped forms (RSF) and ovoid forms (OVF) that appear biogenic.[1] Since, a wide array of experiments and comparisons were made in the effort to entertain and disprove this idea, including analysis techniques like SEM (Scanning electron microscopy), TEM (Transmission electron microscopy), two-stage gas-light guns, low-temperature cycling, the Moskowitz test and FMR (ferromagnetic resonance) tests. 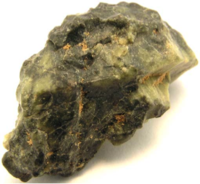 Evidence of bacterial fossils on meteorites originates from the Tatahouine meteorite (top) and the ALH84001 meteorite (bottom).

Fracture surfaces along the ALH84001 Martian meteorite house magnetite crystals and nanobacteria-like forms found on the orthopyroxene in the Tatahouine meteorite are what drive the debate; are these four-billion-year-old fossils of bacteria or mere inorganic assemblages? TEM studies, amongst others, have shown that these meteorite magnetite crystals possess five of the six properties found in modern magnetotactic bacteria, which orient themselves along the Earth’s magnetic field and contain intracellular magnetite crystals, or magnetosomes.[2] Hence, NASA proposed that these crystals, along with the small ovoid and sausage-like bodies, are the remnants of biological entities.[3]

In 1931, an achondrite crashed near the town of Tatahouine in southern Tunisia yielding many fragments that were then sent to the Musée National d’Histoire Naturelle in Paris.[4] Before impact, however, the meteorite broke up along mineral grain boundaries and therefore, the specimens, which consisted mainly of green orthopyroxene, were a few hundred micrometers to several centimeters in size.[5] The site was revisited in 1994 at which point several weathered shards were recovered by sieving the top layer of the sand and observed using SEM and TEM. On the surface, “nanometric” size (80 nm in diameter) bacteria-like forms were revealed that contained C, O, N, Na, K and traces of P and S. These small rods consisted of a thing amorphous layer of carbonate surrounding single calcite crystals with rounded, smooth edges.[5] Such morphologies are unnatural in single calcite crystals and therefore hint at biological activity in their formation. 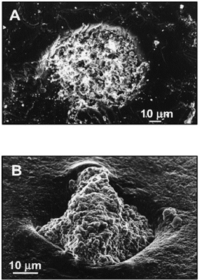 Figure A comparison between the rosette calcite deposits found on the Tatahouine meteorite (A) and similar calcite formations found in bacterial strains grown on agar (B).

Within the chemically homogenous pyroxene meteorite, saucer-shaped cavities with rosette texture were found in fresh internal fracture surfaces. There, local dissolution corresponds with the presence of carbonates, which have been rarely documented in meteorites in addition to RSFs.[4] Experiment evidence shows that these calcite rods display all five characteristics used to infer the biogenicity of fossils: colony formation, size variation, an upper size limit, mineralization elements and bacterial shapes.[5] Inasmuch, the calcite rods in the Tatahouine achondrite cluster to resemble colonies, have an upper size limit of 2 μm, rounded oval shapes and contain silicon, calcium or phosphorous. A lack of significant carbon isotope fractionation between these carbonates and those in the soil surrounding the meteor calls into question the extraterrestrial origin hypothesis.[4] However, the formation of these calcite crystals remains a mystery and thus, a direct link to a biogenic process is yet to be determined.

The interpretation that such objects are microbe fossils is still vigorously debated, especially after a notable Martian meteorite discovered in Antarctica in 1984 was claimed to harbor bacterial artifacts. Extensive experiments and microscopy studies on the rock have revealed magnetite crystals in carbonate that resemble the morphology and composition of modern magnetotactic bacteria.[2] These bacteria use intracellular magnetosomes that contain magnetite crystals to align themselves with magnetic field lines. Whether the rod shaped “nanofossil” magnetite crystals are biologically made or not depends on six characteristics: a definite size range with a width/length ratio, chemical purity, crystallographic perfection, arrangement of crystals into linear chains, unusual crystal morphology and elongation of crystals in the crystallographic direction.[[[#References|3]]] Based on TEM analyses of the ALH84001 carbonates, 25% of the magnetite crystals on the meteorite fit the first five of these properties thus supporting the hypothesis that they are of biological origin.[2] Magnetosome chains are not the most energetically stable configuration but can be stabilized by the rigid biochemical structure of bacteria, which further points at the biogenic identity of the ALH84001 magnetite chains. [3] This room for uncertainty has allowed scientists to propose that uniform crystal size and shape within chains, gaps between the crystals, flexibility of chains and halos that resemble traces of membrane classify these forms as remnants of “magnetofossils.” [3] It is difficult, however, to arrive at this conclusion because only 10% of the magnetite studied can be isolated in chains, keeping in mind that terrestrial magnetosome chain structures are often disrupted. [6]

In addition to the contested evidence of the ALH84001 and the Tatahouine meteorite, questions of survivability and size remain focal points of disagreement.

The bacteria-like entities found on the Tatahouine meteorite take two forms, either rod-shaped or ovoid, with 70-80 nm and 70-300 nm diameters respectively. [1] Although chemical analyses and electron diffraction pattern experiments have confirmed that these are not mere aggregates of iron oxides, iron hydroxides, silicates, carbonates or simple inorganic weathering products, debate centers around their irregularly small size. These sizes closely match the bacteria found on the Martian meteor ALH84001 but are well below any commonly observed bacteria found on Earth. [1] Under biological standards, cells with a volume of less than 200 nm diameter are not considered viable and this has been a central argument against the bacterial fossils hypothesis. [7] However, this limitation is for known life forms only (which have recently been shown to be viable at a volume of 50 – 200 nm) and does not necessarily hold true for all bacteria or for their fossilized remnants. [8]

The ability for bacteria to survive in space while traveling in a hard vacuum under strong radiation and for long periods of time has been a key point for meteorite fossil claims. The hypervelocity impacts at which meteorites arrive on Earth reach 20 – 25 km s-1, which has questioned the survivability of bacteria at these speeds. [9] In turn, several experiments using projectiles travelling at the Martian escape velocity of 5 km s-1 and nutrient media targets have been set up to show that bacteria like Rhodococcus are able to survive hypervelocity impacts. [9] Regardless, the survival of bacteria under severe radiation and a vacuum has yet to be studied. Although such factors may not allow biological material to survive while migrating within the Solar System, they do not refute the plausibility of bacterial fossils in meteorites.

Magnetosomes within magnetotactic bacteria allow for alignment along the North-South magnetic field. It is hypothesized that the magnetite crystals chains found in meteorites are the fossils and remnants of such bacteria.

While further research continues to explore the claim of bacterial fossils on meteorites, scientists are looking at modern terrestrial analogues for the carbonate form in the Martian meteorite ALH84001. [10] Furthermore, the validity of conclusions from existing microscopy studies is continuously revised as new claims of experimental interference and misinterpretation are encountered. [11]