Difference between revisions of "Bacterial response to microgravity" 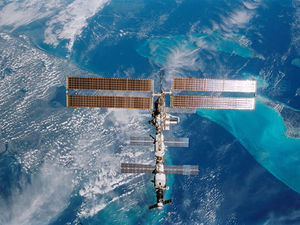 An overhead view of the International Space Station (ISS). The station has a platform for the scientific research of many fields, including microbiology. Image courtesy of NASA.

Bacterial response to microgravity is an increasingly useful area of study, with the dawn of continual human presence in low-earth orbit and more commercialized spaceflight. Since all known life evolved with an approximate gravitational force of 1 g, it is of particular interest to study the effects of spaceflight and microgravity environments on bacteria. These environments have been shown to correlate with distinctive changes in bacterial gene expression, as well as proliferative changes in their growth rate. The latter is primarily due to the reduction of extracellular mass transfer, as well as the motility of the bacterium[1]. Recent studies have also shown an increase in expression of virulence factors in Salmonella Typhimurium[11] and increased biofilm production in Staphylococcus aureus. [4]

The common devices used for simulated microgravity (SMG) are the clinostat, the high-aspect ratio vessel (HARV) bioreactor and the rotating wall vessel (RWV) bioreactor.[5][9] Since rotation can cause centrifugation of the bacteria toward the vessel wall if the speed is too great, or cause their sedimentation downward if the speed is too low, much research has been done to find the optimal rate that would produce motionlessness.[5] It should be noted that simulations cannot fully reproduce the effects of actual spaceflight. 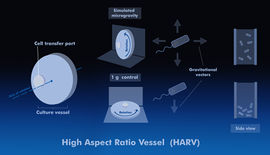 The high aspect ratio vessel (HARV) is used to simulate microgravity conditions. If the axis of rotation is perpendicular to gravity, the vessel randomizes the gravitational vectors felt on the cultured cells, allowing the cells to experience "free-fall" (shown on the top right).[9] If the axis of rotation is parallel to gravity, normal gravity (NG) conditions are achieved (bottom right). Diagram not drawn to scale.

The general tendency of bacterial growth in space is a shorter lag phase, and often a much higher stationary concentration.[6] Part of this reason likely involves the decrease in extracellular mass transfer between the bacteria. This process of physical changes due to microgravity has been referred to as the indirect effect, since it is caused by the extracellular fluid.[1]

Brownian motion (diffusion). In the absence of convection (in space), this is the only way molecules are transferred between cells. Image courtesy of Francisco Esquembre, Fu-Kwun and Lookang.

The transfer of molecules between cells is mainly driven by two physical phenomena: diffusion and convection [7]. On Earth, convection is caused by the relative densities of molecules that cause them to sink more or less in solution. In microgravity environments (such as space), convection currents due to density differences cannot occur and the movement of particles is slowed, limiting extracellular transfer of molecules to diffusion only.[7] Since convection serves to enhance the movement of particles (such as nutrients and signalling molecules), quorum sensing between bacteria is disrupted; this decrease in mass transfer may indirectly cause shorter bacterial lag phase in space [1][5][7], though the mechanism of this process remains to be discovered. 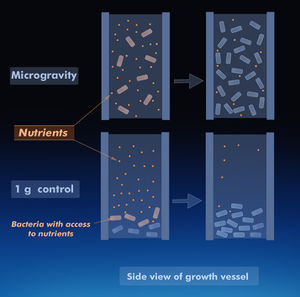 Among non-motile bacteria, a microgravity environment allows more space for nutrient uptake (top left). In contrast, only the top layers of bacteria are exposed to the nutrients in a 1 g environment (bottom left). Diagram not drawn to scale.

In space, the relative densities of cells are nonexistent, perhaps enabling greater spatial freedom for replication and nutrient uptake. It has been demonstrated that in microgravity, E. coli liquid cultures grew to higher cell concentrations than 1 g controls.[6] It is suggested that the presence of gravity causes sedimentation and overcrowding of the cells, also leading to rapid nutrient depletion. In contrast within microgravity environments, it is not just the top layers of bacteria that are exposed to the nutrients, and so greater proliferation occurs.[6] However, it has been observed that the inherent motility of cells determines their stationary concentration. A study found that E. coli GC2852 did not follow the trend of reaching high final cell populations in microgravity.[3] It was concluded that much of the observed effects of proliferative growth apply more to non-motile cells rather than flagellated cells.[1] This is likely because motility offsets cell settling and disrupts the quiescent extracellular fluid, also reducing fluid environment differences with 1 g cultures.[1] It is thus apparent that motility is a potential confounding factor in studying the effects of microgravity, if not considered as a separate variable.[1]

Many studies have revealed a correlation between shear forces and a range of effects in bacteria. These forces are minimal in a microgravity environments and in certain anatomical locations in humans.[4] In particular, low-shear modeled microgravity (low-shear MMG) enhances the virulence of some pathogenic bacteria and it also promotes biofilm formation. [4][9][11] 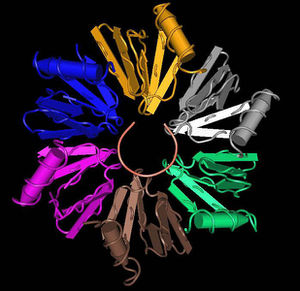 In an experiment from the Space Shuttle mission STS-115, it was observed that flight-grown Salmonella Typhimurium were more virulent in mice than “ground”-grown controls[11]. The flight-grown S. Typhimurium had a lower median lethal dose (LD50) among the mice, and in addition, mice inoculated with the flight-grown pathogen died significantly faster than those inoculated with the ground control. Hfq - a global translational regulator in Salmonella - was found to be the key factor behind this increased virulence.[11] Hfq is an RNA chaperone abundant in many species. It binds small regulator RNA and mRNA, facilitating translation in response to microgravitational stress.[9][11] The expression of hfq decreased in space flight[11]. However, in the total absence of Hfq (among hfq- deletion mutants), S. Typhimurium and other species have been shown to lose much of their virulence; they were unable to invade epithelial cells, effectively resist acid, or replicate within cultured macrophages. [10] This is conflicting evidence, as Hfq promotes virulence but its expression is decreased in space and coupled to increased virulence. Further studies are needed for clarification, but it is likely that a low presence of Hfq is sufficient and necessary for maintaining virulence. A decrease in Hfq among P. aeruginosa (an opportunistic pathogen present in spacecraft) has also been observed, though it is unclear if the virulence was significantly increased for this organism. [3][9]

Many studies on Staphylococcus aureus have revealed that bacterial adherence is directly dependent on shear rate (an attribute that is low with microgravity). In particular, it has been shown that when fluid shear is low, many bacteria (including S. aureus and P. aeruginosa) respond with decreased hfq expression.[4] S. aureus also increased their biofilm architecture, supporting previous investigations. The virulence of S. aureus was reduced (in contrast with S. Typhimurium mentioned above), but augmented biofilm production leads to improved adherence, which could protect against antibiotics.[4] Since S. aureus is aboard spacecraft and the International Space Station (ISS), and some locations of its natural course of infection having low-shear fluid forces, assessing its behaviour in SMG is important for evaluating the risk of infectious disease in space.

T3SS and exceptions to hyper-virulence

Thus far, two bacterial species have shown exception to the trend of microgravity-induced hyper-virulence: Yersinia pestis[8] and S. aureus.[4] The former showed diminished proliferation and virulence, and it had compromised Type III secretion system (T3SS) function.[9] The T3SS is also referred to as the injectisome and it allows the recognition of eukaryotic host cells so that they can be injected with proteins for subsequent infection. Impairment of this system often renders the organism non-pathogenic. It is unclear why the closely related S. Typhimurium (which also showed decreased levels of T3SS) experienced an increase in virulence, whereas Y. pestis decreased in virulence.[9]

The behaviour of bacteria in space is of use for health assessment onboard future spacecraft and the ISS. Many bacteria such as P. aeruginosa and S. aureus are opportunistic pathogens in skin flora.[2] With the advent of antibiotic-resistant strains such as MRSA, these species in particular can be life-threatening. Space microbiology is still in its infancy, therefore understanding and expanding on it will be critical for astronauts, who have no access to health care facilities and have limited medications during their missions. Additionally, understanding the effects of microgravity on pathogenic bacteria can be of use for clinical and chemotherapeutic research on Earth.

[9] Rosenzweig, J. A., Chopra, A.K. (2012). The effect of low shear force on the virulence potential of Yersinia pestis: new aspects that space-like growth conditions and the final frontier can teach us about a formidable pathogen. Front. Cell Infect. Microbiol. 2:107.