A Microbial Biorealm page on the genus Balantidium coli

From the genus Balantidium, Balantidium coli is a large ciliated protozoan parasite. Balantidium coli has been known about for over a century, but the process of infection has yet to be discovered. It is the only known ciliated parasite to infect humans. It is responsible for the disease Balantidiasis. Balantidium coli is found world wide but predominately found in the areas where pigs are raised. Other potential reservoirs include ones that hold rodents and nonhuman primates. More human infections happen in areas where pigs are raised. Humans are usually infected when they ingest contaminated water and food. Fecal to oral transmission is most common. Balantidium coli occur as a trophozoite and a cyst in the colon. The prevalence of this infection is only 1% and have been noted in Latin America, Bolivia, Southeast Asia, the Philippines and New Guinea. The prevalence of Balantidium coli in pigs is reported to be from about 20% to 100%.

The Balantidium coli genome structure continues to undergo research. Only parts ribosomal parts have been completely sequenced. At the Department of Integrative Biology, College of Biological Science, University of Guelph, N1G 2W1 Guelph, Ontario, Canada there is a unpublished journal on by Struder-Kypke, Wright AD, Foissner W, Chatzinotas A, and Lynn DH called “Balantidium coli small subunit ribosomal RNA gene, complete sequence.” The small ribosomal RNA gene that was sequenced had bases 1 to 1640. Their research concluded that “Balantidium currently classified in the Vestibuliferida, did not group with the other vestibuliferids, suggesting that this order may be paraphyletic, relating to a taxonomic group that includes some but not all of the descendants of a common ancestor. (9) 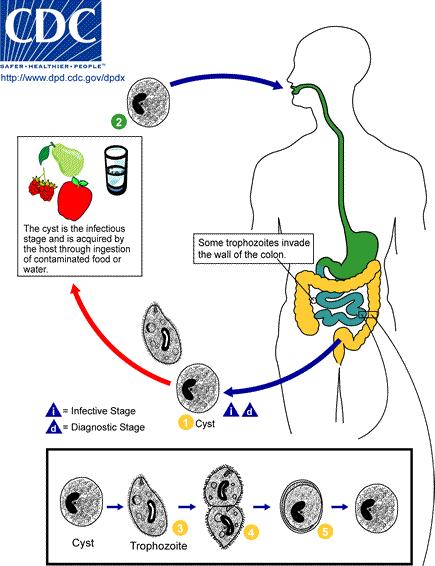 In the trophozoite stage, Balantidium coli can measure between 50-130 µm long by 20-70 µm wide. When observing Balantidium coli unstained, it has a short ciliary covering and has spiraling motility. The two nuclei of Balantidium coli are clearly visible in this stage when the specimens are stained. The peristome, which is an opening at the anterior end of cell, is also visible. The peristome leads to the cytostome (cell mouth). Balantidium coli reproduces either by asexual transverse binary fission or sexual conjugation. In asexual transverse binary fission the bacteria grows in volume until it divides in half to make two identical daughter cells. This is how most bacteria typically grow. In sexual conjugation, a transfer of genetic material between bacteria through direct cell-to-cell contact happens. During sexual conjugation in bacteria is not an equal exchange of genetic material. There is usually a donor and a recipient. The motile trophozoite lives in the lumen of the large intestine. It feeds on intestinal bacterial flora and nutrients. The trophozoite can invade into the mucosa of the large intestine by penetrating through it. The trophozoites are released in the host’s feces and this is when the cyst stage (infectious stage) begins. (3)

The cyst stage begins right when the trophozoite is released in feces. Encystation begins. Encytation is the process of becoming enclosed in a cyst. This process takes place in the rectum. This is done by Balantidium coli as a survival technique. After the release of trophozoites in the feces the feces starts to dehydrates right away. Cysts can be spherical of ellipsoid and range from 50-70 µm long, 40-60 µm across, which makes it smaller than trophozoites. When a stool sample if first observed, the cysts may still have cilia, but after encystation the cilia disappear. The macronucleus and the micronucleus can still be seen in stained specimens. Because cysts exists in fecal matter, this is when contamination comes into play. Feces can contaminate water or food. Once the contaminated food or water has entered the host’s digestive system, cysts can start infecting. Cysts can have cyst walls made of one or two layers, which make them tough and heavy. This allows them to pass through the digestive system without being destroyed. “There a tough cyst wall allows the cysts to resist degradation in the acidic environment of the stomach and the basic environment of the small intestine until it reaches the large intestine.” Once in the large intestine excystation occurs. This is when trophozoites are produced from cysts. Cysts multiply by transverse binary fission. (4)

Balantidium coli is passed on through contaminated food and water. Balantidium coli is transmitted through a fecal-oral route. Balantidiasis (disease caused by Balantidium coli) can be prevented when simple and not so simple environmental changes. Of course each case of Balantidiasis different steps need to be taken. Since Balantidium coli is transmitted be a fecal-oral route proper disposal of fecal material should be the first environmental change. This is simple in developed countries and not so simple in undeveloped countries. Water sanitation keeps Balantidium coli from contaminating water. A simple task of boiling water before consumptions may work. Another option is to get water from a source that is not near where pigs or human sewage are. Proper sewage and trash disposal away from any source of any water supply is crucial.

There is an incubation period of days to weeks after ingestion of Balantidium coli before an infection occurs. Most people who are infected with Balantidium coli are asymptomatic like pigs. Some patients can have cysts in their feces and not even know it. Common symptoms of Balantidiasis include chronic diarrhea, occasional dysentery (diarrhea with passage of blood or mucus), nausea, foul breath, colitis (inflammation of the colon), abdominal pain, weight loss, deep intestinal ulcerations, and possibly perforation of the intestine. Fulminating acute Balantidiasis is when the disease comes very suddenly and with great intensity. Hemorrhaging can occur, which can lead to shock and death. Untreated fulminating acute Balantidiasis is reported to have a fatality rate of 30%.

A stool sample is collected and a wet mount in prepared when diagnosing for Balantidiasis. The wet mount is examined for cysts or trophozoites, through a microscope. Balantidium coli only passes periodically through stool samples, so stool samples should be taken frequently to make a definite diagnosis. Trophozoites can also be detected in tissue. Using a sigmoidoscope, (a thin, hollow instrument used during a sigmoidoscopy procedure) the physician inspects the rectum and the sigmoid colon. They look for bleeding, ulcers, and inflammation to diagnose the cause of the diarrhea or other complaints. They also can take a tissue biopsy for inspection. When diagnosing Balantidiasis because it symptoms are similar to those of amebiasis. To distinguish the difference a careful microscopic examination needs to made.

Much research has been done with Balantidium coli and the infection that it causes. In the American Journal of Primatology (2007) Katherine Hinde wrote a research article called “Milk Composition Varies in Relation to the Presence and Abundance of Balantidium coli in the Mother in Captive.” This was done in the Center for Behavior, Evolution, and Culture, Department of Anthropology, University of California– Los Angeles, Los Angeles, California. She studied 46 captive multiparous rhesus macaques (Macaca mulatta) at the Caribbean Primate Research Center,Sabana Seca Field Station, Puerto Rico. She studied the milk composition between the multiparous rhesus macaques and saw that mothers without Balantidium coli had a higher fat concentration in their milk (5.1% concentration) than mothers that did have Balantidium coli in their lower intestine (4.2% concentration). This was the first evidence that showed that certain aspects of maternal parasite load were associated with milk composition in primates. The concentration between Balantidium coli and milk fat concentration was specific in this research because there other parasites (Trichuris trichiura and Strongyloides fulleborni) were studied and none were associated with milk fat like Balantidium coli was. The mechanism is unknown but hypothesizes have been thought of. It could be that Balantidium coli “competes with resources from dietary intake, causing malabsorption in the mother. Additionally, low-level infection may reduce activity levels and impair foraging or suppress appetite and decrease caloric intake.” Health consequences for Balantidium infection is limited because in this research white blood cell counts were also compared. (5)

5. Hinde, Katherine. “Milk Composition Varies in Relation to the Presence and Abundance of Balantidium coli in the Mother in Captive.” American Journal of Primatology. 2007. Pg. 624-635.