Difference between revisions of "Bark Beetles and Symbiotic Fungi" 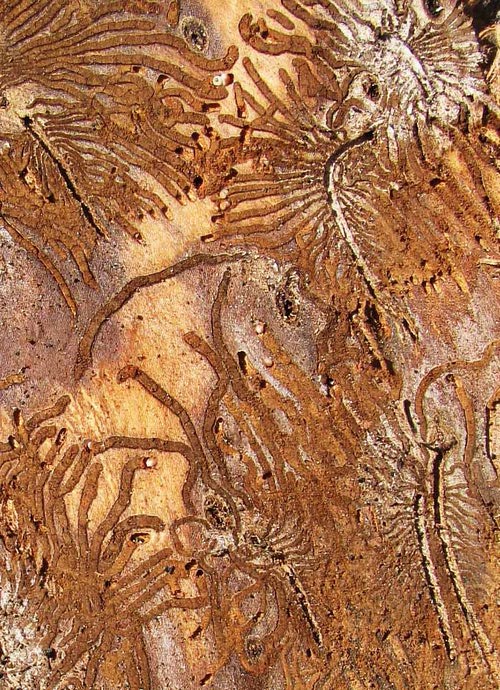 A symbiotic relationship is held between bark beetles and fungi. This interaction has been known to be devastating to forest stands all over the world. Fungi in this interaction lead to the devastating effects in certain arboreal species. There have been many important studies and research performed in order to understand and perhaps to prevent or contain the spread of certain diseases to valued tree stands. Bark beetles destroy stands of trees every year by having a symbiotic relationship with fungi. These fungi are devastating to the health of the tree. Not only are the bark beetles, fungi, and trees involved but also the microorganisms that break down the organic matter left by the dead trees. This interaction affects humans as well. We spend millions of capital in order to preserve and protect stands of trees we hold dear. For example, $10.4 million was spent in 2010 to control the bark beetle outbreak in lodgepole pine stands.

Mutualism occurs between two organisms when they both mutually benefit from interacting with one another [1]. Bark beetles transport the fungi to new trees and the symbiotic fungi protect the beetles by preventing the tree from decimating the bark beetle larvae population.

Parasitism happens when one individual harms another in order to benefit from the interaction. The bark beetles and fungi both utilize the protection and resources within the tree without offering anything back except death and destruction.

This interaction between the bark beetles and the symbiotic fungi eventually leads to the death of the tree, then the beetles and fungi move on to their next host. There are ecological consequences to an unregulated population of bark beetles and their symbiotic fungi. However, there are some positive effects. Ecologically the continued destruction of types of species of trees can affect the surrounding habitats in that there is less water uptake by a diseased tree, when a tree perishes then it provides an available food source for bacteria and fungi in the environment. This cycle aids in the development of younger trees that are then allowed to grow and take the place of the affected trees.

Bark beetles have been creating mazes in trees for a long while. These bark beetles live in the dead phloem tissues of trees. Most bark beetles live in dead or decaying trees, however some are known to actively penetrate healthy trees, such as the mountain pine beetle (Dendroctonus ponderosae). Female bark beetles burrow into mature trees, signal males, mate, and then deposit their eggs deep within the tree’s tissue. After entering the tree the beetles transport the fungi on structures called mycangia. When bark beetles attack trees that are healthy, these trees may produce resin or latex as a defense. 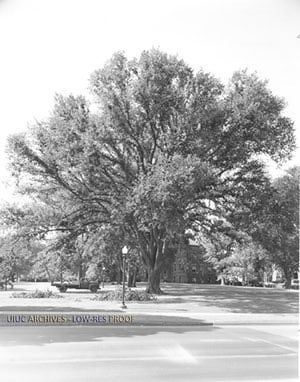 In Elm trees, bark beetles spread the fungi through sexual contact. With this, the fungus spreads and due to a tylotic response in the xylem, the tree prevents the fungus from spreading. This response, however, also blocks water from moving up and photosynthates from moving down the trunk of the tree. This Dutch Elm Disease has been spreading across North America killing unresistant elm species. This disease is one of the most talked about issues of shade trees in North America. The University of Illinois Extension has information about Dutch Elm Disease

In pine trees, bark beetles infest by laying eggs under the bark. Once present in the tree, these beetles inoculate the tree with a blue stain fungus. This specific fungus is injected into the sapwood. This action prevents the tree from controlling or exterminating the beetle larvae with sap. The introduction of this particular fungus blocks water and nutrient transportation within the xylem and phloem of the tree. [5]

The microbial processes within these interactions are multi-leveled and complex. Certain types of fungi in these interactions are relied upon by specific types of bark beetles. For example, the blue stain fungus and also the fungi related to Dutch Elm Disease can both prevent the tree's xylem and phloem from functioning properly. This defensive response from the tree to slow the spread of the pathogen also slows the spread of water and photosynthate. This process causes the tree to eventually kill itself. After the tree has died, many other microorganisms utilize this new food source and break it down for energy.

Millions of trees perish each year due to this symbiotic relationship between bark beetles and symbiotic fungi. This uncontrolled destruction increases the numbers of fungi and bark beetles infiltrating and devastating stands of trees. This termination of specific types of trees changes the macro ecosystem by decreasing the types of species present. Furthermore, it allows the decomposing microorganism levels to rise because of the abundance of decaying plant matter.

This microbial process can cause an environmental effect because of the reduction of susceptible species of trees. Having decreasing amounts of trees reduces the amount of carbon sequestering that trees do each year. A reduction in carbon sequestration increases the level of atmospheric carbon and can add to the effects of global climate change. 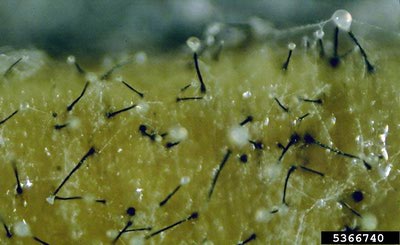 Fungi are the major microorganisms that are involved with this symbiotic interaction.

This fungi genus of pathogens is responsible for the Dutch Elm Disease. It is adapted for insects to disperse the spores in order to inoculate trees.[6]

This fungi species is extremely destructive and it was first described in both Europe and North America in the 1940s and has devastated elm stands in both areas since the late 1960s.

This pathogenic fungi genus is responsible for the destruction by mountain pine beetles.

Fungicides are only useful as a protective measure, are not very cost effective. Research has therefore focused on selection of elm varieties that are both resistant to Dutch elm disease and well suited to European environments. Research conducted by INRA and CEMAGREF has shown that European elms are susceptible to Dutch elm disease. Resistant varieties are found in Asian species, but they do not look similar. A project began in 1975 that led to the creation of new varieties through cross-breeding. The Lutèce® variety is a result of this research. It combines resistance to Dutch elm disease, ornamental qualities, and also is adapted to the European climate. Furthermore, other varieties are currently being selected to restore the genetic diversity necessary for the future of the elm. [7]

Experiments were conducted to evaluate the use of solar radiation for reducing survival of mountain pine beetle populations in infested logs. Plastic sheeting, routine turning of the logs, and stacking of logs were utilized in these experiments. All treatments in all experiments caused drastic reductions in brood survival. Also in all experiments brood survival was regularly decreased when the logs were exposed to the sun. High temperatures were consistently greater in the treatments with plastic sheeting, the exposed surfaces of the logs to the sun, and the upper layer of logs in the two-layer treatments. This information suggests that heat is directly responsible for the observed reductions in survival. Solar treatments are an effective alternative for reducing mountain pine beetle survival in infested trees. [8]

An efficient procedure for the conservation of mature American elm trees that have survived the epidemics of Dutch elm disease and are potential sources of disease resistance is reported. This experiment utilizes in vitro propagation of buds from mature trees to clone 100 year old American elm trees. An important factor which is used for the optimization of culture process is auxin metabolism in the source tissue. In this experiment use of blocking antiauxins was utilized so that auxins would not be metabolized. This was important because a high shoot rate was necessary. Plantlets that had roots were easily adapted to the greenhouse with 90 percent surviving. This will aid in making Dutch elm disease resistant clones, and this will also provide an approach to advance preservation of other endangered tree species. [4]

Edited by Kord Nolte, a student of Angela Kent at the University of Illinois at Urbana-Champaign.