Fungal disease has emerged as an increasing threat to a number of different organisms, especially amphibian species. Batrachochytrium dendrobatidis (Figure 1), a Chytridiomycota fungus that causes the infectious disease chytridiomycosis has been found to be the major cause of amphibian death caused by fungal infection. B. dendrobatidis infects the superficial, keratin-containing layers of amphibian skin.9 The infection then spreads across the skin, causing it to thicken and slough off. This thickening interferes with osmoregulation and eventually leads to death.1

B. dendrobatidis has been responsible for the epidemic illness and death of amphibian populations in Australia, New Zealand, Europe, Central America, and the United States.4 It has been found to affect at least 93 amphibian species in frogs, toads (Anura) and salamanders (Caudata).2 Evidence of B. dendrobatidis has been found worldwide and is believed to have originated in Africa and spread through the trade of Xenopus laevis.3 Predictions are that after introduction to a new area roughly 50% of amphibian species and roughly 80% of individuals may disappear.26

The spread of B. dendrobatidis has larger environmental implications as well. In a study of the common toad (Bufo bufo) and the midwife toad (Alytes obstetricans) in Peñalara Natural Park it was found that after chytridiomycosis nearly eliminated the midwife toad, the common toad significantly increased its number of breeding sites.25 Other studies have found that tree frogs (Hyla chrysoscelis developed slower when reared with B. dendrobatidis, but only when predatory newts (Notophthalmus viridescens) were present.2

More than 95% of zoospores stopped moving within 24 hours and swim less than 2 cm before encysting.5 B. dendrobatidis cultures grow on autoclaved snakeskin, as well as 1% keratin agar. Cultures grow optimally in tryptone or peptonized milk. No additional sugars were required when grown in tryptone. B. dendrobatidis produces extracellular proteases that degraded casein and gelatin. The proteases were active against azocasein at temperatures between 6–37 oC and in a pH range of 6–8. The highest level of activity occurred at temperatures of 23–30 oC and at pH 8.5

B. dendrobatidis is identified by its intracellular flask-shaped sporangia (spore containing bodies) and septate thalli. The fungus produces smooth-walled zoosporangia (zoospore containing bodies), which are generally spherical in shape. Each zoosporangium (5.2 ± 0.72 μm6) produces a single discharge tube, which penetrates the skin and releases mature zoospores. The zoospores (3-5 μm in diameter) are oval shaped and have a single posterior flagellum (19–20 μm in length), which allows it to move in water. There is little morphological difference in B. dendrobatidis strains, and all strains are pathogenic.4,7 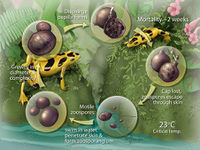 B. dendrobatidis has two stages of it’s life cycle. The first is a motile waterborne zoospore in which it disperses. The second is a stationary monocentric thallus which develops into a single zoosporangia (container for zoospores).8 In Figure 2, the sporangium (contents of the zoosporangium) divides into new zoospores that exit the sporangium through one or more papillae. B. dendrobatidis has not been shown to reproduce sexually. It is well adapted to living in the epidermis. Sporangia live inside the superficial epidermis (stratum granulosum and stratum corneum) in amphibians. Their rate of development matches that of the epidermal cells they inhabit as they move outwards and also keratinize.8 The cells they initially infect are living, but soon grow into dead keratinized cells. The papillae merge with and dissolve the epidermal cell membrane and open onto the surface of the cell facing outwards from the body. The duration of the life cycle in vitro is 4 to 5 days at 22°C and due to the similarity in life cycles in vivo and in vitro, duration is assumed to be the same in both.8 Temperatures higher than 25 °C increase the rate of epidermal turnover and reduce growth of B. dendrobatidis.5 In warm conditions some frogs may recover from infection19 because the fungus does not have time to complete its life cycle before being shed with the epidermal layer.8 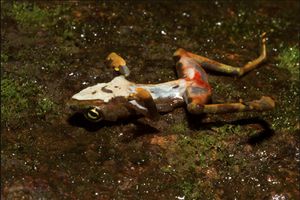 Responses to infection by B. dendrobatidis vary widely in nature and in the lab. Some individuals become infected and recover, others die20 and the time to death varies as well.4 Variation in host resistance, virulence of the pathogen and the environment all contribute to the range of responses to B. dendrobatidis infection.21 B. dendrobatidis also has different effects on the same species at different stages in its life cycle. In the larval stage Anaxyrus boreas is more susceptible than it is in the metamorphic stage.23 In Rana cascadae, the post metamorphic life stages were more susceptible to infection. Symptoms of chytridiomycosis include abnormal posture, loss of righting reflex, lethargy, and rapid progression to death.22 Increased epidermal sloughing, epidermal ulceration and reddening of the skin (Figure 3) around the toes and front pelvic area have been reported.4

B. dendrobatidis infects superficial layers of the skin in amphibians which contain keratin. During metamorphosis skin becomes increasingly keratinized, which allows the infection to spread over the organism. In juveniles and adults the digits and pelvic patch of skin involved in osmoregulation are the most effected areas. As the infection continues the skin thickens and sloughs off. The skin in amphibians is intimately tied to regulation of hydration state, which can have compounding negative effects on the organism. The cause of death due to B. dendrobatidis, is cardiac arrest due to improper electrolyte blood levels.9 Mortality rate and time till death by B. dendrobatidis varies with fungal dose, temperature, age of amphibian, and host species.1,10

In captive organisms, chytridiomycosis can be treated successfully by antifungal medication. There are a variety of different antifungals used, but one of the most common involves a series of baths in the antifungal drug itraconazole.27 Itraconazole baths have been used successfully in rescue operations in the wild. Amphibians from populations that are experiencing deaths to chytridiomycosis are captured and treated.28

A number of physical and chemical disinfectants can cause 100% mortality in B. dendrobatidis. The fungus is highly sensitive to heat and died within 4 hours at 37oC. Figure 4, desiccation also proved successful for some of its treatments. UV light exposure did not kill 100% of the B. dendrobatidis for any of the tested exposure times. Many chemical methods proved useful. Ethanol and Virkon both killed 100% of B. dendrobatidis within 30 seconds. Sodium hyperchlorite was useful, as was Didecyldimethylammonium Chloride (DDAC). DDAC is promoted as being environmentally safe and is used in agriculture and in forestry. Dithane and Formaldehyde were not as effective. Sodium chloride and potassium permanganate were also not as effective.12 Treatment is not always fully successful and some methods are not tolerated well by amphibians.

Currently there are no good methods of treatment available for wild organisms. It is incredibly difficult to get enough antifungal medication into the environment to treat B. dendrobatidis infection. One strategy proposed is to treat some of an infected wild population in order to reduce the intensity of infection overall.29 There is no evidence currently that suggests a vaccine is a viable method of control.30

The Amphibian Conservation Summit declared amphibian chytridiomycosis, “the worst infectious disease ever recorded among vertebrates in terms of the number of species impacted, and its propensity to drive them to extinction.”15 Although there are antifungal treatments available for organisms infected with B. dendrobatidis in captivity, there remains no solution to the problem presented by the spread of B. dendrobatidis in the wild. The incredible speed with which chytridiomycosis caused by B. dendrobatidis can damage a population and the widespread prevalence of this fungus adds to the difficulty in attempts to control further infection and aid already infected organisms. Many unique and invaluable amphibians species are at risk from not only this fungus, but from habitat loss, and urgent conservation efforts would benefit worldwide amphibian populations.