Difference between revisions of "Bdellovibrio"

A Microbial Biorealm page on the genus Bdellovibrio

B. bacteriovorus is primarily found in ocean water, freshwater, sewage, soil, and the intestines of certain mammals. It preys on other bacteria, plants, animal, and human pathogens. The bacterium is also known as a “living antibiotic” since it is not the cause of any known diseases.

B. bacteriovorus has a large genome that consists of over three million base pairs on a single circular chromosome; it encodes 3,584 predicted genes. It has a single sheathed polar flagellum, which allows the bacterium to move at high speeds (approximately 100 cell lengths per second). B. bacteriovorus has not yet shown the ability to transfer genes from its prey; however, it is known to invade and entirely consume other gram-negative bacteria. In addition, B. Bacteriovorus obtains essential nutrients for growth from its prey; it lacks genes that aid in the synthesis and degradation of certain amino acids. Recent studies have found that its genome consists of a large number of genes that code for lytic enzymes; there are well over 200 genes. The enzymes assist in the decomposition of the proteins, polysaccharides, RNA, DNA, and lipids that make up its prey's inner cell. Additionally, the steps of its life cycle (including entry into the host) are made possible due to the existence of hydrolytic enzymes coded for by its genome.

B. bacteriovorus is a gram-negative rod shaped bacterium that is highly motile. On average, B. bacteriovorus is 0.2 to 0.5 μm by 0.5 to 2.5 μm in size. It thrives on the degradation products of the host’s proteins and nucleic acids. The bacterium is comprised of a helical filament of flagellum that is contained within a membrane sheath; this membrane sheath is then surrounded by a basal sheath.

The life cycle of B. bacteriovorus includes five stages. First, the bacterium attaches itself to the host's outer membrane using a hook-like extension which breaks down the outer cell wall through the release of certain enzymes. This is followed by penetration into the periplasm and the repair of damage done to the cell membrane. Once the bacterium is inside the periplasm, it introduces hydrolytic enzymes into the host cytoplasm. This increases the bacterium’s food supply by making the inner membrane of the host cell “leaky.” The bacterium then grows and once it has exhausted all the resources in the host’s cell, it divides into as many as 15 motile cells. The weakened host cell lyses, releasing progeny B. bacteriovirus bacteria, which are then ready to find new prey to attack. This life cycle takes up to three to four hours.

This bacterium is commonly found in water of different qualities including some water treatment plants. It can also be found in man-made habitats, the rhizosphere of plant roots, and soil. It has also been observed to reside in the intestinal tract of certain mammals where it reduces pathogens in the intestines. B. bacteriovorus is useful in the purification of waste water because it decreases gram-negative bacterial counts. 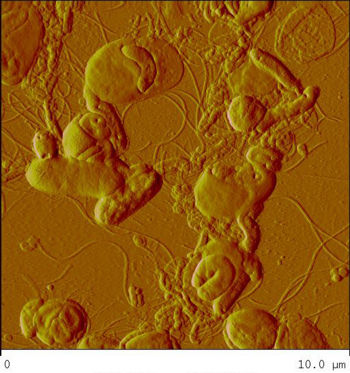 The genome of Bdellovibrio has been recently sequenced and researchers found out that it contains roughly 3.8 megabases of DNA, which makes it similar to the size of E. coli. Bdellovibrio controls biofilms and in turn is also able to control pathogens. This bacteria might be useful in future medical advances, if gram-negative pathogens would need to be reduced in the body.