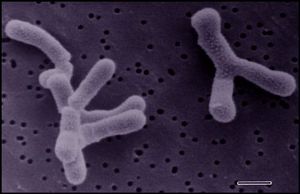 The genome of Bifidobacterium dentium is 2,636,368 bp long and contains approximately 2143 open reading frames, 186 pathways, 2129 polypeptides, eight protein complexes, 965 enzymes, and 55 tRNAs. The GC percentage is fifty-nine percent (Turroni et al., 2011), which is rather high for a microbe. The genome of B. dentium can be used to determine whether or not an environment has been polluted by human or animal feces because this bacterium is the only Bifidobacterium species present in humans and not in animals (Nebra et al., 2003). The genome also shows a high ability to withstand acid pH including bile, while also proving to be mildly tolerant to oxygen or also known as anaerobic; and this all makes sense considering the bacterium lives in the GI tract where there is a high acid content present (Andriantsoanirina et al., 2013).

Bifidobacterium dentium is a gram negative, branched, rod-shaped, anaerobic bacterium. The bacterium is located in the GI tract and also the oral cavity. The genus Bifidobacterium is considered a probiotic because it transfers a great deal of benefits to its host while benefiting itself; it is even believed that this bacterium has formed a symbiotic relationship with its host. The bacterium feed off of the excess sugars that the host misses during metabolism which provide for an important carbon and energy source (Cura et al., 2012).

There is an idea that the main cause for change in genetic material in prokaryotes is an organism called a prophage. These organisms are responsible for the genomic evolution and also the variations of bacteria. The genus Bifidobacterium is able to carefully encrypt certain cell envelope structures, which plays a significant part in the bacterium choosing its own host (Turroni et al., 2011).

Dental caries is considered to be one of the most common diseases (Becker et al., 2002) in the world because of a lack of proper oral hygiene and unhealthy eating habits. The bacterium feed off of the sugars that sit on the surface of the teeth after ingesting food. Bifidobacterium dentium is considered to be eight percent of the bacterium cultured from dental caries. It has been determined that in patients that have the oral flora Streptococcus mutans present, Bifidobacterium dentium will more than likely not be present.

Edited by Jessica Shambaugh, students of Rachel Larsen in Bio 083 at Bowdoin College [1]