Bifidobacteria are probiotics that naturally colonize in the human gastrointestinal tract (GIT) and vagina. They were first isolated over a hundred years ago from human feces. Bifidobacterium longum is one of most important inhabitants in the human body. This bacterium is very helpful because it maintains a normal digestive tract, inhibits the growth of harmful bacteria, and also boosts the immune system (1). 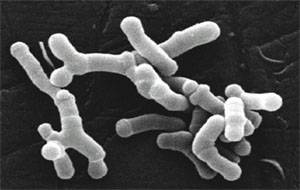 B.longum 's chromosome contains a 60%-GC content and has a genome that is approximately 2.26Mb long. There are also “4 nearly identical rrn operons and 16 intact insertion sequence (IS) elements, as well as possible prophage and integrated plasmid remnants,” (2). It also regularly harbors plasmids.

Bifidobacteria are Gram-positive, anaerobic, and branched rod-shaped bacteria. They are also non-motile and non-spore forming. In the colon, these bacteria ferment a wide variety of sugars into lactic acid. “It has homologs of enzymes that repair oxidative damage such as NADH oxidase and NADH peroxidase. It also contains proteins that reverse oxidative damage to proteins and lipids such as: thiol peroxidase, alkyl hydroperoxide reductase (ahp C), and peptide methionine sulfoxide reductase.” (2).The B. longum genome codes for various proteins that are specialized for the catabolism of oligosaccharides. B. longum 's longtime presence in the colon may be due to its adaptation to catabolize the substrates that are poorly digested by the host or other GIT microorgranisms(2). Bifidobacteria have a hexose metabolism that arises via a phosphoketolase pathway that is also known as the ‘bifid shunt’. The enzyme fructose-6-phosphate phosphoketolase (F6PPK) is an important element of ‘bifid shunt’. Since F6PPK is not present in other gram-positive bacteria, its presence is the most common test for this genus.

Bifidobacteria have a symbiotic relationship with its human host. As previously mentioned, B. longum ferments sugars into lactic acid, and this helps to lower the pH in the intestines. Bifiobacteria are known to be probiotic, which means that it’s a microbe that helps to protect its host and prevent disease. B. longum is the most often seen species in humans and has been studied to show that it provides potential health benfits. These benefits include: “diarrhea prevention in antibiotic treated patients, cholesterol reduction, alleviation of lactose intolerance symptoms, immune stimulation, and cancer prevention,” (3). Bifidobacteria can be found in dairy foods, such as yogurt, and can be taken as supplements. It has also been found that B. longum is one of the first inhabitants of the GIT of infants, especially in those that were breast-fed. Infants that are formula-fed appear to have a different microflora in their GIT, and this may be associated with the higher risk of diarrhea and allergies in these babies (1).

Bifidobacterium longum have genes that can synthesize about 19 different amino acids from NH4 and other key biosynthetic precursors (phosphoenolpyruvate,oxaloacetate, oxoglutarate, and fumarate) supplied by its limited Krebs cycle that lacks fumarase, oxoglutarate dehydrogenase, and malate dehydrogenase (2). It also consists of homologs that are necessary for the biosynthesis of pyrimidine and purine nucleotides from glutamine. Also, “homologs of most enzymes needed for synthesis of folic acid, thiamin, and nicotinate are present, whereas all those for riboflavin, biotin, cobalamin, pantothenate, and pyridoxine are missing,” (2).

Due to the fact that Bifidobacterium longum is nonpathogenic, it is able to be used in various research studies in the body. One study tried to show that constipation associated with weight loss diets can be reduced when patients ingest the supplement symbiotic zir fos (B. longum W11 + FOS Actilight). Patients used in this study were considered obese and were divided into groups. They were given different treatments. The groups ingesting zir fos and a maintaining hypocaloric diet showed greater constipation improvements than those who used laxatives or combined physical activity and a healthy diet.(4) Also, Bifidobacterium longum was seen to help alleviate the symptoms of Japanese Cedar Pollinosis (JCPsis). "JCPsis is an immunoglobulin E (IgE)-mediated type I allergy caused by exposure to Japanese cedar pollen,"(5). Antihistimines and steriods have been used to try to treat symptoms, but their side effects are adverse. It has been seen that Bifidobacteria may have some association with the prevention of several allergic diseases, and in this study a powder form of Bifidobacterium longum BB536 was compared to a powder placebo in order to test its effects.(5)Testing showed that BB536 showed improvement in ocular JCP allergy symptoms. Bifidobacteria have also been seen to help in cancer prevention and therapy. Enzyme/prodrug therapy is a treatment for cancer that is currently being researched. The most common therapy being tested is the cytosine deaminase/ 5-fluorocytosine strategy. Cytosine deaminase (CD) is able to transform the nontoxic prodrug 5-fluorocytosine (5-FC) into the anticancer agent 5-fluorouracil (5-FU).(6) BifidobactErial Selective Targeting-Cytosine Deaminase (BEST-CD) therapy was the strategy used by these scientists. That means that the "CD gene was inserted into the B. longum-E.Coli shuttle plasmid,...and that B. longum transformed with this plasmid expressed fully active CD," (6)Also, the plasmid-transformed B. longum produced a mutant CD which increased the enzyme activity of the conversion from 5-FC to 5-FU.

1) Reinert, Birgit. "Friendly tenants in the human gut: The genome of B. longum". 2002. Genome News Network.