Difference between revisions of "Bioengineered riboswitch" 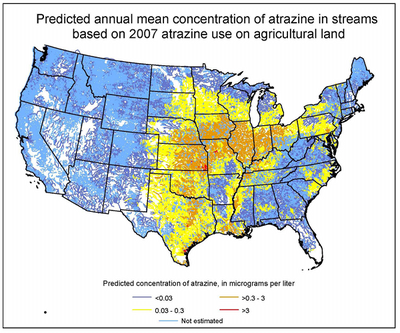 An engineered riboswitch is an artificially designed and synthesized sequence of mRNA based on isolated naturally occurring aptamer. Riboswitches induce rely on the function of an aptamer to bind small-molecule and, following conformational changes, alter target gene expression [9]. Expression can be regulated at the level of transcription (interaction with promoter) and translation (interaction with mRNA) [10]. This principle of utilizing RNA-small molecule interactions has lead to the invention of programmed bacterial cells that target specific molecules such as pollutants.

Resonance structure for atrazine. An atrazine is capable of both donating and accepting hydrogen bonds. [13]

For decades, atrazine has been widely used as an herbicide in United States [2]. Atrazine is a popular weed killer that protects crops such as corn and sorghum [12]. However, Atrazine often causes contamination of groundwater as it leaches into ground water [2]. The contaminated water is associated with birth defects and menstrual problems in humans [12]. Also, the exposure to atrazine for long periods of time can lead to malignant tumours in the endocrine system [3]. 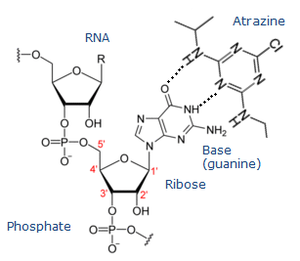 Possible Cooperative hydrogen bonding between atrazine and RNA. RNA can form strong hydrogen-bond complexes with atrazine when the geometry for orbital overlap and the electronic configuration are favorable. Modified from [13]

An atrazine forms complexes with functional groups by simultaneously donating and accepting a hydrogen bond [13]. This ability enables the functional groups to have different affinity for atrazine depending on their orbital geometry and electronic configuration. RNA, which has both hydrogen bond donors and acceptors, can have the affinity for atrazine as an attractive target [9].

The atrazine catabolic pathway is widely researched due to its application in bioremediation and in studies on evolution, as it is a xenobiotic compound [8]. Atrazine was first introduced in 1960 and the chlorohydrolase atzA gene, under the pressure of anthropogenic selection, evolved to make use of atrazine as a carbon and nitrogen source [8]. E. coli has been engineered because the researchers are able to express and purify the necessary enzymes (i.e. chemotaxis and atrazine chlorohydrolase) in its genome [9].

Aptamer specific to a ligand

A synthesis of ligand-specific riboswitch includes selecting aptamers from a pool of nucleotide sequences [10]. The aptamers having affinity toward specific ligands are identified by the series of high-throughput screenings such as SELEX experiment, migration experiment, β-Galactosidase assay and in-line probing [9]. Sinha et al. state the advantages of these experiments as high throughput, cheap and user-friendly. These specific aptamers are inserted into the riboswitch which is most commonly found in the untranslated regions of mRNA [10]. The riboswitch upon binding to its specific ligand regulates gene expression at both transcriptional and translational levels. At the level of transcription, the riboswitch forms rho-independent transcriptional terminator. Also, it induces degradation of mRNA and masking of ribosome binding site at the level of translation. In the case of atrazine, the atrazine-specific riboswitch controls the gene expression only at the level of translation [9]. In an experiment, the atrazine-specific riboswitch was mutated at its RNA sequence that it no longer masked the ribosome binding site properly. The leaky expression was the consequence of expressing genes in the absence of atrazine. An aptamer requires high specificity in its RNA sequences in order to control the gene expression precisely.

There are limitations in synthesizing novel engineered riboswitches. Firstly, only 6 aptamers have been found that are capable of engineering riboswitches [10]. Each one of the identified aptamers can be used as building blocks for more complex RNA switches. However, the number of known aptamer domains is too low to recognize all the different target molecules. Secondly, there are limitations in the aptamer’s usage. The most commonly used aptamers are theophylline and tetracycline aptamers. The theophylline aptamers are known to be toxic in high concentrations and the tetracycline aptamers cannot be used in prokaryotes. Lastly, even though relatively large amounts of aptamers are shown specific to their cognate ligands from in vitro selection, only a tiny portion of the aptamers actually works in intricate in vivo conditions. The in vitro selection rules out RNAs that do not show high affinity binding to the ligands. The in vivo selection screens the participants which would work in a living, uncontrolled organism. These limitations impede the progress of development on engineering riboswitch.

Chemotaxis and degradation of atrazine

The process of seeking atrazine from atrazine-dependent riboswitch relies on cheY and cheZ, while the destruction of Atrazine requires atzA gene [4]. The chemotaxis genes control flagellar rotation enabling bacteria to seek atrazine in smooth-swimming [4]. The atzA gene expresses atrazine chlorohydrolase (AtzA) to catalyze dechlorination of atrazine to hydroxyatrazine [6]. This conversion of atrazine to hydroxyatrazine is beneficial in bioremediation because hydroxyatrazine does not harm human health and it absorbs to soil more strongly [11]. These regulated genes allow bacterial cells to continually respond to atrazine.

Kuo and Koshland suggest that the products of cheY and cheZ genes allow bacteria such as E. coli to respond to chemical gradients by smooth swimming or tumbling [4]. The mutants with deleted cheZ gene and cheY gene were tested individually using 2 different promoters. The result showed that the cheZ mutants tumbled frequently and the cheY mutants smooth swam excessively. Therefore, in the presence of atrazine, an engineered bacterial cell would up-regulate cheZ genes and down-regulate cheY genes to chase the target molecule without tumbling often.

Atrazine catabolic pathway. Cyanuric acid is relatively biodegradable that breaks down into carbon dioxide and ammonia. [11]

(5) Lynch, Sean (2009). “From Aptamer to Riboswitch: High-throughput Screens and Selections for the Identification and Creation of Synthetic Riboswitches.” Emory University’s Dissertation. Retrieved from http://pid.emory.edu/ark:/25593/50s1p