Biofilms are defined as aggregates of microorganisms attached to each other on a surface [4]. Many ecologically diverse microbes are known to produce such structures, and although the basic premise is the same, there exists a spectrum of mechanisms involved in biofilm development [13, 18]. Such may be due to convergent evolution and the hardiness that biofilms provide to microbes in environments ranging from the Antarctic, to hot springs, to the human body [10, 19]. These microorganisms adhere to one another and a surface through collective secretion of a sticky extracellular polymeric substance (EPS) [12]. As a result of DNA exchange, physiological changes, and the thick matrix in which these microorganisms embed themselves, they become highly resistant to conventional antibiotic treatments [14]. This is of major concern as it renders antibiotics—the most common means of eliminating microbes—ineffectual.

Importantly, biofilms often form on the surfaces of implanted medical devices such as urinary and venous catheters, breast implants, and pacemakers [6, 16]. The accumulation of microorganisms on implants and their dispersal in the body result in chronic inflammation, which often necessitates removal of the infected device [3, 14]. This serves as both an economic and a medical predicament. Indeed, biofilms are responsible for over 60% of infectious conditions in developed countries, where medical implants are frequent [16]. Notably, most biofilms on indwelling implants are initiated by microbes from our normal flora—these include S. epidermidis, S. aureus, and E. coli [1, 3]. These and other biofilm-producing bacteria enter the body during the process of implantation, or exist on the surface of the implant pre-surgery and colonize the implanted device [1, 14]. Primary health concerns of biofilms on implants are potential for septic shock, tissue necrosis due to chronic inflammation around the implant, and further colonization within the body[16, 18]. 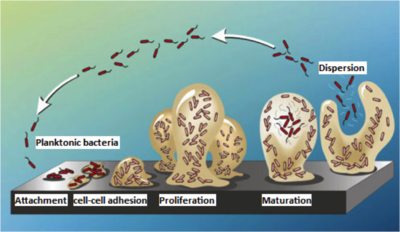 Medical implants serve as a polymer surface to which bacteria can attach to via hydrophobic or electrostatic attraction [2, 18]. Binding of bacteria to the hydrophobic surfaces of implants is energetically favorable and is a critical first step in biofilm formation [2]. Biofilm development occurs in a stepwise manner, beginning with adherence of bacteria to the implant surface, followed by their proliferation and differentiation, and culminating with their dispersion (Figure 1) [16, 18]. Adhesion occurs via surface adhesins such as polysaccharides and components of bacterial membranes such as teichoic acids in gram-positive bacteria [18]. Common to many bacteria is the adhesin poly-GlcNAc (Pga) and its biosynthesizing proteins PgaA and PgaD [4]. Pga production regulation depends on the bacterial nucleotide second messengers guanosine-bis 3', 5'(diphosphate) (ppGpp) and c-di-GMP [4, 21]. Nucleotide second messengers are universal signal transduction molecules that regulate transition between motile and sessile states in many bacteria by altering adhesin expression [5, 20]. For example, ribosomal stress caused by sub-inhibitory concentrations of ribosome-targeting antibiotics triggers biofilm formation via the nucleotide second messengers C-di-GMP and ppGpp upregulating PgaA and PgaD synthesis, leading to Pga adhesin biosynthesis and consequent attachment of the bacteria (Figure 2) [4]. 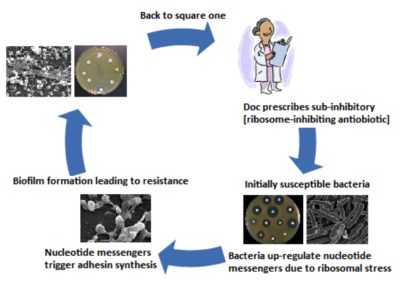 Cell growth and continual secretion of polysaccharides result in expansion of the biofilm, with dying cells releasing DNA and proteins—further strengthening the matrix and adding layers to the biofilm [12, 18]. Differentiation refers to physiological changes that for one, induce nuclease and protease secretion, leading to channels in the matrix [2, 18]. This allows for cycling of nutrients to the interior of the biofilm and occurs via cell-to-cell communication involving the process of quorum sensing [2, 8]. Specifically bacteria secrete molecules known as autoinducers, which at high concentrations induce expression of proteins that facilitate multi-cell processes such as biofilm development [8]. Moreover, quorum sensing up-regulates molecules such as AI-2, which results in increased biofilm sizes due to bacterial distribution over a larger area [9]. In E. coli, this occurs via AI-2 inducing transcription of a protein that in turn positively regulates transcription of the response regulator QseB and sensor kinase QseC; this two-component system then induces transcription of proteins involved in flagellar synthesis and movement [9]. Quorum sensing involving a variant two-component system, the Agr system, is involved in biofilm dispersion in pathogenic bacteria such as S. aureus [8, 18]. In particular, a high cell density resulting from near-end exponential growth results in upregulated production of an autoinducer peptide, which binds to the membrane-bound histidine kinase AgrC [8, 18]. This interaction leads to phosphorylation of the response regulator AgrA, which then binds the promoter region of genes encoding proteases, resulting in their expression and subsequent detachment of cells from the biofilm matrix [18]. In this way, biofilms are able to persist as they simply detach, disperse, and re-colonize elsewhere [18].

Biofilm-associated bacteria display unusual persistence as well as resilience to antimicrobials. A major contributing factor is the EPS-based matrix in which these bacteria embed themselves. The matrix is primarily composed of secreted polysaccharides, proteins, lipids, and DNA, which endow it with a characteristic dense, gluey nature; such a matrix is impenetrable to immune defenses and large molecules such as antibiotics [12]. In addition, biofilms consist of several layers of EPS and dead cells, with cells in the core of biofilms well shielded from external pressures [12]. Aside from the physicality of biofilms, the physiology of the cells imparts great resistance to the bacteria [6]. For instance, bacteria in the interior of biofilms often exist in a dormant state as persister cells [11]. In E. coli, the kinase HipA phosphorylates a translation factor, thereby inactivating it and inducing a static, non-growing state unreceptive to antibiotics [11]. Furthermore, horizontal gene transfer between cells in the biofilm via conjugation results in conveyance of antibiotic resistance genes [17]. Further, as the matrix contains DNA of dead cells, transformation via uptake of this DNA also plays a significant role in resistance gene transfer [17]. Thus, as a consequence of low matrix penetration, presence of persister cells, and exchange of antibiotic resistance genes, bacteria in biofilms are highly resistant to antibiotics, sometimes having a minimal inhibitory concentration 1000 times that of the free-living variants [6, 16].

Bacterial biofilms on implants can cause blood stream infections and systemic inflammation when cells of the biofilm detach and disperse as part of the process of biofilm development [1, 14, 18]. Inflammation is initiated by host immune system recognition of conserved bacterial molecules such as cell wall components [13]. Chronic inflammation instigated by persistent biofilms damages host tissues due to oxidants produced by immune cells that accumulate and kill host cells due to lack of penetration in the biofilm [16]. Ironically, these necrotic host cells offer biomass and biomolecules that contribute to sizing and strengthening the biofilm matrix, respectively [16]. Diagnosis of implant-associated bloodstream infections is often difficult because there are frequently no signs of inflammation around the implant since bacteria disseminate in the body [15].

Although current research is mainly focused on developing more specific inhibitors of quorum sensing and adhesin synthesis pathways, many companies are looking into the prospective applications of biofilms [10, 16].

Traditional antibiotic use has been selecting for multi-drug resistant bacteria and by its self has not been effective in combating the resilient biofilm-associated bacteria [3, 16]. Thus, use of matrix-disrupting agents has been increasing. Novel treatment ideas include use of inhibitors of adhesin polysaccharide synthesizing molecules such as PgaA/D, which would prevent cells from forming well-anchored biofilms [3, 4]. Decreased adhesin synthesis may also result in thinner biofilms with increased permeability and thus antibiotic-susceptibility [16]. Similarly, inhibiting autoinducer molecules involved in quorum sensing, or the use of nonfunctional autoinducer analogues may halt biofilm dispersion by preventing protease secretion and therefore cell detachment [7, 18]. Also, divalent metal ions such as Ca 2+ are bound by teichoic acid polysaccharides of bacteria, allowing for cell-to-cell adhesion and increased biofilm density [14]. Accordingly, using chelators of metal ions, such as EDTA, can prevent biofilm formation by preventing intercellular adhesion [14]. However, as Ca 2+ is also essential to human cells, uncontrolled use of EDTA may cause potentially fatal hypocalcaemia; thus, research is being conducted on using combinations of chelators that would minimally disrupt host cells [7].

Extensive research is being conducted on the bonding of antimicrobial agents to catheters [15]. Similarly, binding charged polymeric chains on the surfaces of medical devices, as well as reducing the roughness of these surfaces is also being researched, as both would hinder bacterial adherence to the device [2].

In contrast to their agonistic role in medicine, biofilms are being tested as a more efficient means of treating diesel-contaminated water [10]. Due to their fixed nature and high cell density, biofilms have an enhanced ability to metabolize and thus remove alkanes from water passing along their surface [10]. Specifically, in one strain of Pseudomonas, biofilm-associated secretion of substances that solubilize otherwise hydrophobic alkanes, and upregulated production of an alkane monooxygenase with a high oxygen affinity, allows them to efficiently obtain and metabolize diesel [10].

As the mechanisms underlying biofilm formation continue to be elucidated, it is hoped that better treatments for biofilm-associated infections will come about, and that the resilient nature of biofilms can be put to use in bioremediation.