Difference between revisions of "Bioluminescent Bacteria in Human Settings"

Bioluminescence is the production of visible light through a biochemically-mediated reaction, most commonly occurring in the marine organisms. Organisms use this visible light as an effective way of communication with other organisms (4). Light production has co-evolved with a wide range of organisms, especially those in bottom dwelling habitats, and it’s very important for their functioning, including defense against predators, hunting, and attracting a mate (4) (2). Bioluminescent bacteria are all Gram-negative, non-sporeforming and motile (6). One example of the benefits of producing light is found in the zooplankton by researchers of the Hebrew University of Jerusalem; Zooplankton is attracted toward the luminous marine bacteria and ingests the bacteria, but it can’t digest the bacteria, so the bacteria stay in the zooplankton’s gut and produce light. This visible light also helps the zooplankton to attract their own predators (fish) to ingest them. Zooplankton can access to the nutrients in the fish gut and it’s very important for their survival in the deep and dark ocean (2). Based on the Annual Review of Marine, this phenomenon has evolved at least 40 times among existing organisms. In bacteria it has been suggested that the light-emitting reaction came from as a detoxification mechanism to remove the oxygen and also other possibility is that luciferase function like a “secondary respiratory chain” (6). By now scientists classified eleven species of bioluminescent bacterial into four genuses: Vibrio, Photobacterium, Alteromonas, and Photorhabdus (5).

Fig. 1. Colonies of the luminous marine bacterium growing at 12°C on a seawater-based complete medium (SWC) agar; it is isolated from a lemon sole fish skin in the artificial seawater. The left photo was taken with a light source and the right one was taken by using their bioluminescence as a light source. I took this picture at MICB 401 lab on Oct 29, 2012.

Luminescence depends on possessing the lux genes for light production. The Lux operon consists of five essential genes: luxA,B,C,D, and E. Light emission in bacteria is catalyzed by luciferase, a heterodimeric enzyme composed of two subunits a and b which are coded by luxA and luxB (5). Bacterial luciferase reduces the oxygen from surrounding environment while oxidizing a flavin mononucleotide (FMNH2) and a long-chain aliphatic aldehyde (RCHO) to produce the visible light. Synthesis of the long-chain aldehyde is catalyzed by a fatty-acid reductase complex composed of three polypeptides, an NADPH-dependent acyl protein, an acyl transferase and an ATP-dependant synthetase (6). These three polypeptides are coded by luxC, luxD, and luxE. The overall reaction is shown below in FIG. 2. 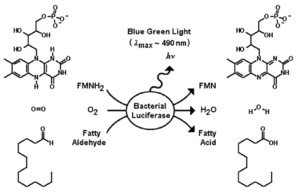 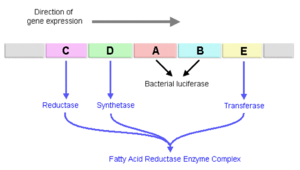 Fig. 3. The gene arrangement and direction of gene expression on the luxCDABE operon (10).

Bacteria start emitting a steady light in the presence of oxygen when they detect their local population density by quorum sensing (4). Autoinducers are produced in luminous bacteria and is excreted to the extracellular environment. When autoinducers accumulate in the environment, they can induce the expression of the luxCDABE gene (10). They produce 100- to 1000- fold more luciferase and light levels increase by 10^3 to 10^6-fold (6).

Bio-light is one of the interesting ideas for using these kinds of bacteria in our microbial home to generate subtle glow based on Philip’s design idea. Bio-light was a part of a much larger system called a “Microbial Home” system. In this system all wastes such as sewage, kitchen wastes, garbage, and waste water are filtered and processed by “methane digester” to produce methane and composed material to feed the luminescent bacteria (7). Filling the bacteria with fluorescent proteins that emit different frequencies of light can enhance the light intensity. This technology can be use in dark spaces such as nighttime exit signs, road makers, and signage (1). 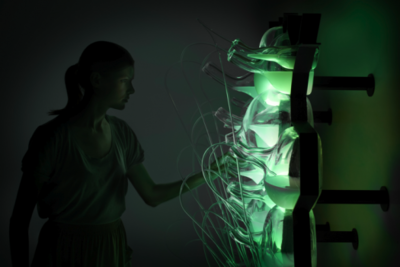 Fig. 4. The glass cells are filled with live bioluminescent bacteria and fed with methane and composed material through silicone tubes to produce light (3).

By inserting a luxCDABE gene in non-luminescent bacteria, researchers can turn the non-luminescent bacteria to the luminescence ones to measure and sense the growth and living condition of bacteria in different environments (10). This phenomenon can be used in several areas from “detection of pathogenic bacteria in human food sources” to detection of pollutant and toxic waste in the environment (10). There are two different techniques of using bioluminescent bacteria as a biosensor: “lights-on” and “lights-off”. The ”light-off” way has been used already for decades for toxicity testing. “Lights-on sensors are usually recombinant microbial cells containing a metal-response unit fused to a promoter less reporter gene encoding for the reporting signal” (9). These recombinant bacteria express the luminescence encoding genes luxCDABE as a response to presence of heavy metal such as Zn, Cd, and Pb (9) (8).

1. Asuncion, I. Bioluminescence and the future of lighting. October 2012. Available from: <http://business.inquirer.net/88268/bioluminescence-and-the-future-of-lighting>

3. Boyle, R. Bacterial Lamp Can Eat Your Sewage and Light Up Your House. November 2011. Available from: <http://www.popsci.com/technology/article/2011-11/fed-human-waste-luminous-bacteria-can-light-your-house>

9. Ivask, A., Kahru, A., Rolova, T. A suite of recombinant luminescent bacterial strains for the quantification of bioavailable heavy metals and toxicity testing. BMC Biotechnol 2009; 9:41