The term bioprecipitation refers to the role bacteria play as causative agents of precipitation via [1] ice nucleation [1]. Pure, homogeneous water freezes at a temperature of approximately -36°C [2] but the presence of bacteria induces ice formation at a warmer temperature, up to -1°C [3], depending on the nucleating material [4]. The chemistry of ice formation suggests that clouds and precipitation could be more easily formed at higher, more common temperatures with the presence of bacteria. Figure 1 demonstrates the proposed bioprecipitation cycle, based on research by Brent Christner [4]. Given that [2] clouds play a vital role in driving the climate system [5] bacteria could therefore be considered as climate altering factors. However in 2010, C. Hoose et al. estimated that aerosol bacteria have, at most, a 0.6% influence on a global scale [6]. Several different organisms are said to be involved, particularly those that are easily suspended in the air column [4]. Bioprecipitation was first thought of by David Sands in the late 70s, while he was attempting to solve the problem of frost damage on crops due to Pseudomonas, as described by his TedxTalk ( [3] The Rainmaker Named Sue.) As David Sands explains, the same bacterium that was causing the frost damage to the plants was found in samples of the clouds (and not clear sky,) leading him to believe that the bacteria were literally raining down upon the plants. Later experiments determined that this may in fact be the case [1, 3, 8]. 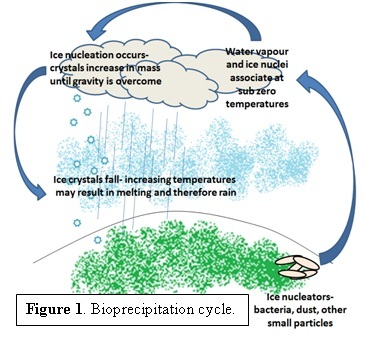 The most well described organism that demonstrates ice nucleation is [7] Pseudomonas syringae, which was determined to specifically supply a source of ice nucleators by Leroy Maki in the 1970’s [7]. The protein that acts as an ice nucleus is InaZ, which allows for ice formation at the relatively warm temperature of -2°C [7]. 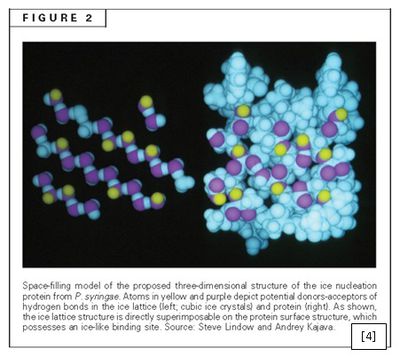 InaZ is thought to promote ice formation by being a template for ice crystals and not by enzymatic methods [8].The protein is affiliated with the outer membrane of the bacterium, and may be associated with lipid components [9]. The primary sequence of the protein is repetitive [8] suggesting that the tertiary structure may also be repetitive, resulting in a well formed template for ice crystal formation.

Figure 2 demonstrates the possible locations of amino acid side chains that may be involved in hydrogen bonds with the first water molecules that reach InaZ. The orientation of the protein is important in ice crystal formation due to the concept of [8] free energy [10]. There is an initial growth phase of the crystal during which the free energy increases until a critical mass is reached, upon which time the free energy decreases and the crystal growth proceeds at a faster rate [10]. As the initial period of crystal formation is the most difficult, the InaZ protein provides a template which helps with the orientation of the water molecules decreasing the free energy and facilitating the crystal formation. The initial well formed crystal is called the nucleus, which then allows for the crystal formation to continue at higher temperatures than otherwise required. The presence of the bacterial protein allows for a higher temperature compared to the other ice nucleators, namely dust particles and other small compounds, because of its regular well formed structure [2]. According to Christner, these biological nucleators comprise most of the ice nucleators involved in precipitation [11]. 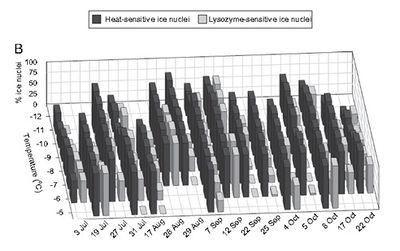 Figure 3. The percentage of ice nuclei in rain from Louisiana susceptible to heat and lysozyme digestion. [11]

Although it is debatable how much of an effect bioprecipitation has on a global scale, it does appear to have an effect on smaller scales. Christner found that the amount and type of ice nucleators present in rain and snow samples varies depending on the month [11] (see figure 3.) In this way, bioprecipitation may account for some of the observed seasonal variability.

Current research is underway to determine the implications of bioprecipitation on climate, and its possible use in artificial [9] cloud seeding. As the exact mechanistic details of ice nucleation are still unknown, it is also of interest to investigate the specific roles of various ice nucleating proteins. Research is also being done to investigate the use of ice negative Pseudomonas strains, strains that cannot produce ice nucleators [12]. These ice negative strains would be used to add competition to ice positive strains that cause much of the frost damage that is seen on a variety of plants [12]. This has an agricultural and economic benefit (less loss of crops) but may have a negative impact on the climate if the bioprecipitation aspect of Pseudomonas is considered [12].