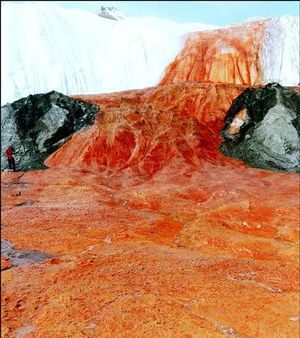 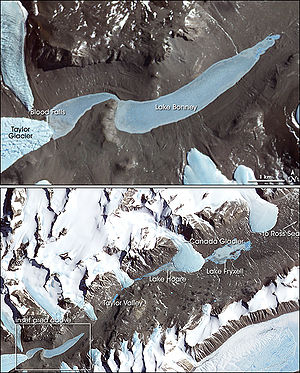 Blood Falls, Antarctica is a subglacier outflow that hosts a habitat of microbes. Blood Falls is able to be seen due to the interactions between Taylor Glacier and Lake Bonney. The subglacier outflow, brine has iron in the outflow which results in the outflow appearing to being “blood like,” or a deep red. When the brine flows from the glacier and is exposed to the atmosphere, it becomes oxidized and a red salt cone that comes out of the outflow which is known as Blood Falls. The microbes that survive in Blood Falls are some of the most versatile organisms on the planet as they can survive without oxygen, using iron and sulfate to survive. As these microbes survive without oxygen, an important process for these microbes are that they are evidence of how possible life outside of earth would survive.

The average moisture at the area of Blood Falls is less than six mm of water units. These dry conditions have persisted in the area for about fifteen million years.

The pH found in the habitat was approximately 8.0 or higher with the highest found to be 9.32, which puts the habitat to have a pH that is a base.

The amount of bacteria per sample in Blood Falls amounted to be more than 300.

The Shannon index is a frequently used measure of diversity and therefore provides a relative statistic for comparing studies of different environmental systems. The Shannon Index shows that in Blood Falls the diversity of the species are comparable to measurements from other icy and glaciated environments. However, Blood Falls has twice the diversity compared to pack ice of the Artic and Antarctic. [6]

Organisms that are chemoautotrophs are organisms, such as a bacterium that obtains its nourishment through the oxidation of inorganic chemical compounds as opposed to photosynthesis. [7]

Organisms that are Chemoorganotrophs utilize organic compounds as their energy source. [8]

Organisms that are Heterotrophs are organisms that can’t synthesize its own food and is dependent on complex organic substances for nutrition and survival. [9]

Organisms that are extremophile is an organism that thrives in and may even require physically or geochemically extreme conditions that are detrimental to the majority of life on Earth. [10] 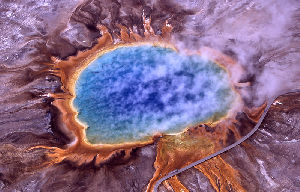 Image of “an example of an extremophile that can live in Blood Falls, that survives in the extreme cold of Antarctica are psychrophiles that can survive under 15O C. Courtesy of[3]

Chemoautotrophs in Blood Falls, are able to live by respiring iron leached from bedrock with the help of a sulfur catalyst. [12]

The discovery of the microbes at Blood Falls, the microbes were found in a place where cold, darkness, and lack of oxygen previously have led scientists to believe nothing could survive at Blood Falls. [13] The discovery of microbes surviving here without using oxygen has given the supporters of the hypothesis of the “Snowball Earth” a key piece of evidence. Stephen Warren is leading an expedition to Antarctica to study the Antarctic ice to study the past climate of the earth. [14]

In addition to how the microbes can survive without using Oxygen, research has been started to determine if life can exist outside of Earth under ice, for example at Mars or Europa, a moon of Jupiter. The first step in this research is called Environmentally Non-Disturbing Under-ice Robotic ANtarctiC Explorer (ENDURANCE). This research will help scientists determine what the ocean looks like underneath the Antarctic ice sheet. [15] 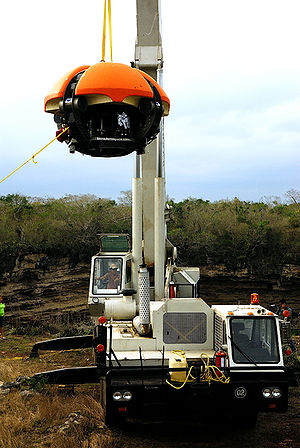 Jill A. Mikucki and John C. Priscu conducted a research at Blood Falls that determined the bacterial diversity in Blood Falls the research was designed to be able to validate other researches that determined that the subglacier brine was a host of microbes with using Iron and Sulfate concentrations. The results of this research determined that the brine underneath the ice held a viable ecosystem of microbes that can grow using reduced iron and sulfur compounds. [16]