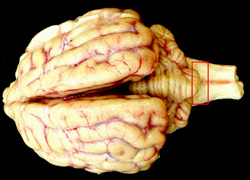 Bovine spongiform encephalopathy (figure 1) is a progressive neurological disorder in cows that belongs to a group of diseases known as transmissible spongiform encephalopathies1. that causes the central nervous system to degenerate. BSE has an incubation period of about four years and affects adult cattle at the peak onset of 4-5 years. Humans can be infected with this disease after eating products that have been tainted with this disease. While the exact method of transfer is still not understood, it is believed that a misfolded protein known as the prion protein in cattle is the cause of transfer. This protein is difficult to kill as it is able to survive heat, UV light, ionizing radiation and normal sterilization techniques1 It is believed that the variant Creutzfeldt-Jakob disease, which is the human form of BSE, is caused by BSE. However, studies have shown a similarity between prions of BSE and TSE, but not a directly correlation to support that theory2. Symptoms of CJD are dementia, memory loss, personality changes and hallucinations.