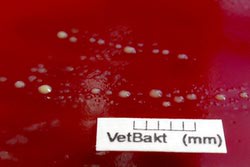 B. hyodysenteriae is able to survive transiently primarily in moist feces from infected pigs which allows for an increase in the spread of the bacteria among pigs via digestion of infected feces.[2] Once a pig is infected with B. hyodysenteriae it will most likely develop swine dysentery (SD). Swine dysentery can lead to stunted growth rates and death which can be extremely costly when the swine are raised for food purposes.[1] There are very few drugs commercially available to combat the costly side effects of SD due to its insensitivity and resistance to macrolide, lincosamide, and pleuromutilin classes of antibiotics typically used to treat SD.[5]

B. hyodysenteriae has one circular chromosome consisting of 3,000,694 base pairs. There is also a circular plasmid that consists of 35,940 base pairs. The genome contains 2,669 open reading frames with 2,122 being putative protein-coding sequences.[2] 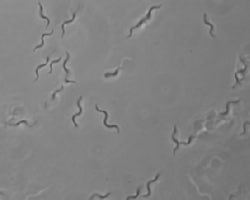 "B. hyodysenteriae" is a gram negative bacterium with a loosely coiled, helical shape. These microbes have flagella in the periplasmic space, which is typical of spirochaetes, to assist in motility which is necessary for colony formation in the large intestine.[3]

B. hyodysenteriae is a facultative anaerobe which is oxygen tolerant due to its NADH oxidase activity.[2] It is a chemoorganotroph with acetate, butyrate, H2, and CO2 being major end products resulting from glucose metabolism. B. hyodysenteriae is readily grown on tryptic soy agar plates or in brain heart infusion salt or Kunkle’s broth at 38-40°C with a growth yield of ~109 cells/ml and a doubling time of 1-5 hours. [5]

Usually found in the large intestine of a pig or living transiently in moist feces excreted from an infected animal.[2] B. hyodysenteriae is known to mostly affect piglets but has also been found to cause disease in chickens and birds as well.[7]

This pathogenic bacteria colonizes in the large intestine of pigs causing dysentery. [2] The complete haemolysis of the red blood cells contributes is the reason B. hyodysenteriae is so highly pathogenic.[1]

Edited by Chelsea Douglass student of Dr. Lisa Moore of the University of Southern Maine