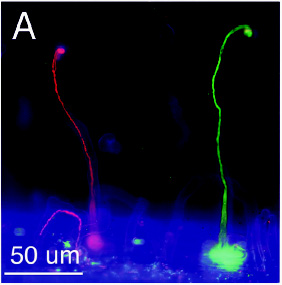 The genome of Sinorhizobium meliloti is similar to Rhizobium sp. NGR234; it has a 3.65 Mb chromosome, a 1.35 Mb megaplasmid (pSymA), and a 1.68 Mb megaplasmid (pSymB). All three genomic elements contribute in some way to plant symbiosis (Galibert et al. 2001).

| However, nitrogen fixation is an energy expensive process that requires up to 22% of the plants net photosynthate. In addition, at least 25% of the electron flux through the nitrogenase goes towards reducing protons into hydrogen gas. This process of nitrogenase-dependent hydrogen production is a major factor in the efficiency of symbiotic nitrogen fixation. To have more efficient energy use, some Rhizobium and many Bradyrhizobium strains recycle the hydrogen produced by nitrogenase in nodule bacteroids that have a hydrogen uptake system (Hup). However, Sinorhizobium meliloti, M. ciceri, and R. leguminosarum by. viciae UML2 strains have poor expression of the hup system (Palacios et al. 2000). |}{| width="100%" | width="66%" |

Rhizobia can be found in the roots, or rhizosphere, of other types of plants where they cause the formation of nodules. For example, Bradyrhizobium japonicum was first isolated from a soybean nodule in Florida in 1957. Rhizobium sp. NGR234 has a host range of more than 112 genera of legumes (Viprey et al. 2000). These symbiotic relationships occur when rhizobia penetrate their hosts with centripetally-developing infection threads. The bacterium induces the a meristem at the cortex of the plant roots where nodules then develop. Meanwhile, the infection threads make their way into the nodule cells and release rhizobia into the cytoplasm of infected cells. The rhizobia, which act as symbiosomes, enlarge and differentiate into nitrogen-fixing bacteroids, which have low free-oxygen levels. The symbiotic development comes from an exchange of chemical signals between the plant and the bacteria. One of the first signals in this continuous exchange are called flavonoids and are released by the legume roots. They actually activate the expression of nodulation genes (nod, noe, and nol) by interacting with rhizobial regulators of the NodD family. Most of these nodulations genes then help synthesis and secrete a family of lipochito-oligosaccharide molecules that help the bacteria get into the root hairs (Viprey et al. 2000). |}{| width="775" | width="769" | 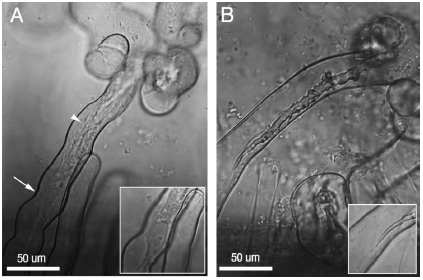 Table showing the stages of nodulation. From The Hebrew University of Jerusalem | width="348" | 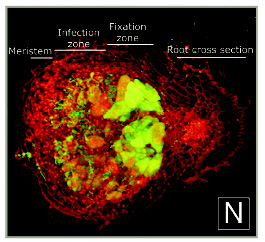 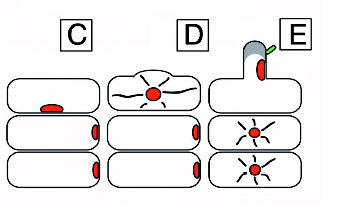 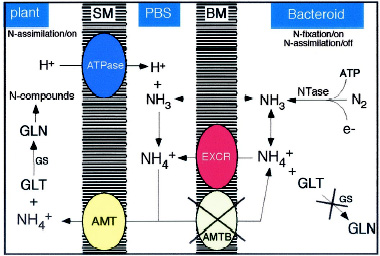