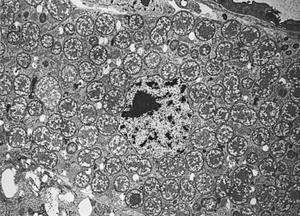 Buchnera aphidicola has a very small genome (<1 Mb) compared to other bacteria (6). As most Proteobacteria do, Buchnera aphidicola has one circular chromosome with few numbers of plasmids, two in most cases (1). Verification of the phylogeny of Buchnera aphidicola was done by comparing the genome sequence with various species in the family called Enterobacteriaceae,which are bacteria believed to be most closely related to Buchnera, and thought to have diverged from each other most recently (3). By comparing the genomes between Buchnera and species of Enterobacteriaceae, one can find the genomic difference between symbiotic bacteria and free-living bacteria (4). There are several distinct features of the genome Buchnera aphidicola. The ratio of G+C to A+T in their chromosome is fairly high due to the higher number of G+C nucleotides that were substituted for A+T nucleotides,since the divergence of the species(5). "Buchnera aphidicola" is a genetically stable organism, because it lacks many enzymes and proteins involved in metabolism due to its symbiotic relationship with aphids (3). Besides a nutritional co-dependence with aphids, Buchnera have lost the ability to produce cell surface components such as lipopolysaccharides, which are a common characteristic of gram-negative bacteria. This is partly due to co-existing with aphids for millions of years(4). Lastly, Buchnera aphidicola have lost many genes that are involved in nutrient synthesis through deletions in their chromosomes(3). Researchers have found that the majority of genome reduction began shortly after the symbiosis between Buchnera and the aphids initiated, however before aphids began to diversify(7). 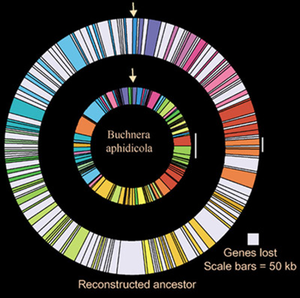 Buchnera aphidicola does not have many metabolic enzymes which normal Gram-negative bacteria have. The symbiotic relationship with aphids and the lack of chromosome crossover events due to vertical transmission of genetic materials within its species have caused the deletion of genes required for various metabolism (3). Researchers have identified those enzymes, and they are found to be essential for anaerobic respiration, the synthesis of amino-sugars, fatty acids, phospholipids, and complex carbohydrates (3). Buchnera aphidicola also have lost regulatory factors allowing continuous overproduction of tryptophan and other amino acids (3). This loss of genes are thought to be the result of symbiotic relationship with aphids, as they share key nutrients together. It is not known how the aphids communicate with Buchnera what or how much nutrition it needs, but researchers have hypothesized a few things. They believe that it could be regulated by the amount of nitrogen and carbon substrates that the host produces (6). The symbiosis not only reduced the genome involved in metabolism but also reduced the genome which codes lipopolysaccharides (LPS), the key component of the cell walls of Gram-negative bacteria (4). The lack of lipopolysaccharides resulted in non-pathogenicity of Buchnera aphidicola(1).

The symbiotic relationship of Buchnera aphidicola with aphids began between 200 million and 150 million years ago, according to the study of genome sequences and phylogeny within closely related species and aphids (2). Buchnera aphidicola have persisted through maternal transmission and co-speciation, with very few lateral gene transfer, which suppress the diversity of their genome (2). Aphids have developed bacteriocyte cells to host Buchnera aphidicola (2). It is estimated that a fully grown aphid may host 5.6 × 10^6 Buchnera aphidicola cells (2). Each bacteriocyte contains many vesicles called symbiosomes, which are derived from the plasma membrane. (2) Most of the aphids contain maternally transmitted bacteriocyte cells, which themselves contain Buchnera aphidicola, explaining the nature of vertical gene transfer within Buchnera themselves. The aphids live on a restricted diet (plant sap), rich in carbohydrates, but poor in nitrogenous or other essential compounds (4). Their mutualistic relationship is beneficial to the both of them.The Buchnera provide amino acids to the aphid, while the aphid provides itself as a host to the Buchnera (8). It is believed that the Buchnera provide the essential nutrients that the host lacks, by keeping the enzymes necessary to synthesize those essential nutrients (4). In return, Buchnera lost other key metabolic enzymes because they are dependent on aphids to provide those nutrients (4). Furthermore, Buchnera have lost the ability to produce cell surface components such as lipopolysaccharides, which forces them to keep the endosymbiont relationship with aphids (4).

Proteobacteria contain various pathogenic bacteria such as Escherichia, Salmonella, Vibrio, and Helicobacter (1). But Buchnera aphidicola lacks lipopolysaccharides in their cell walls, which leads to a reduced-pathogenicity (4). There are no known pathogenic events found due to Buchnera aphidicola.