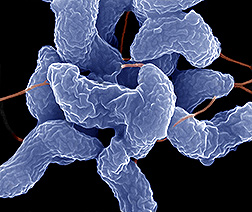 The Campylobacter bacteria is found in the intestines of many animals and some humans. Clinical evidence suggests that the site of Campylobacter infection seems to be the ileum and jejunum in the small intestines rather than in the large intestines. During the pathogenesis process, the organism first begins by penetrating the gastrointestinal mucus using its motility and spiral shape. The bacteria then adheres to the gut enterocytes where the flagellum has been shown to secrete Campylobacter invasive antigens (Cia) and cytolethal distending toxins (CdtA,B,C) responsible in host cell apoptosis. Once infection has occurred, the immunoglobulin, specifically IgA, rises and crosses the gut wall. This causes immobilization and complement is activated. [11] Although it is the leading cause of food-borne illness in the United States, Campylobacter can be easily killed by cooking or heating. In most cases, Campylobacter can contaminate water, milk or undercooked meat - especially chicken. It only takes a small amount of bacteria to cause infection. The illness usually lasts 5 to 7 days, and most of these cases will disappear without treatment. However, 25% of these patients are likely to have a relapse. [5]

Virulence factors include the invasion of epithelial cells and the production of cytolethal distending toxin. [14]