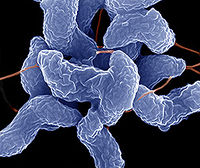 Diagnosis of Campylobacter is done by confirming its presence in the patient’s stool. The two methods currently used in identification are growth on a selective medium such as Preston Campylobacter selective agar [10] and Polymerization Chain Reaction (PCR) [11] to determine the DNA presence of Campylobacter jejuni as well as other related species and subspecies.

The Innate immune response from the host includes several things such as TLR's (toll like recepttors), Serum type, and sugars having an important role. Campylobacter has evolved to specifically overcome a few of the immune systems most basic responses including the TLR5 receptors that recognize the flagellum of the bacterium, and also the TLR9 receptors responsible for recognition of CpG di-nucleotides present in Campylobacter. Other experiments have also shown the importance many downstream TLR's in the immune response and their stimulation against the disease. Macrophage activation from NOD1 receptors and their mediation play a part in campylobacter's plan to circumvent the innate immune response. Studies have also been conducted as to the role of fucosylated sugars in breast milk and how their presence prevents the attachment of Campylobacter to the intestinal mucosa. C. jejuni is found to be sensitive to specific types of serum, emphizising the importance of compliment mediated responses of the immune response.

The adaptive Immune response has developed several responses to many antigens present on the bacterium. Some tests using human volunteers has shown that the earliest signs of antibody presence as approximately 6-7 days after inoculation. Of the antibodies that are detected are several of isotypes. Almost unsurprisingly, many of the antigens recognized by antibodies come from campylobacters more prodominant virulence fators including the bacterial flagellum, many periplasmic proteins, capsular polysaccharides, and the CDT toxin.