The exact symptoms of CDV vary by the infected species, strain virulence, environmental conditions, host age, and host immune status. However, in all species, the virus targets the respiratory, CNS, integumentary, and gastrointestinal systems [11]. Generalized symptoms of affected animals include across carnivore families include diarrhea, neurological issues, impaired immune function, and dyspnea [15], Common symptoms of acute generalized infections, particularly among Canidae include pneumonia, vomiting, diarrhea, anorexia, and dehydration [14]. However, infections can be difficult to detect among Felids as CDV often causes clinically silent infections and fatal disease [15]. Infection of the CNS can also lead to neurological symptoms such as muscle twitching, seizures, and occasionally paralysis. Once the infection causes neurological complications like seizures, death often follows [16] [17]. CDV survival rates depend, in large part on the host species. For example, the fatality rate of infected domestic ferrets is close to 100% while 50-70% of infected domestic dogs don't even show symptoms [11].

The ability of CDV to infect all terrestrial carnivore families (Mustelidae, Ursidae, Viverridae, Procyonidae, Felidae, Hyaenidae, and Canidae), in addition to various non-carnivores, allows it to threaten the conservation efforts and long-term survival of many species [11] [22]. Large predators are frequently in danger of extinction due to their reliance on large tracts of habitat, vulnerability to poaching, and frequent conflicts with humans. Exposure to CDV only exacerbates the pressure on these struggling populations of carnivores. Part of what makes CDV so dangerous to wildlife populations is its ability to spread between many species [23]. Domestic dogs are most common reservoir for the transmission of CDV to wildlife populations. However, infected individuals of the same species in addition to other wild carnivores can also spread the virus. As the human population continues to expand, the threat of the transfer of CDV to wildlife populations only grows [24].

CDV has repeatedly demonstrated the ability to drive species of already threatened species further towards extinction. A study on a population of Amur tigers (Panthera tigris altaica) in the Sikhote-Alin Biosphere Zapovednik (SABZ) assessed the impact of CDV on this population in addition to modelling how CDV could influence the potential extinction of tiger populations of various sizes. Their model found that the prevalence of CDV could increase the 50-year extinction probability of the tiger population in SABZ by 6.3% to 55.8% [13] (See Figure ). The most important factors determining the model's outcome was the prevalence of CDV in reservoirs (domestic dogs and other wild carnivores) and its rate of effect contact with tigers [13]. Many endangered species only remain in small populations (relative to former levels), making them particularly susceptible to CDV. Given the ability for CDV to jump from domestic dogs to wildlife populations, many studies have focus on monitoring populations of domestic dogs that could potentially come into contact with target species. A recent study examined the ability for CDV transmission from domestic dogs to threaten giant panda (Ailuropoda melanoleuca) populations. Their study population of pandas were found to be extremely susceptible to CDV due to a lack of an antibody for the virus in addition to living in close proximity to unvaccinated domestic dogs that have been exposed to CDV </ref> [22]. While CDV has not yet infected this population of pandas, other species have experienced large scale declines in population directly due to CDV outbreaks. In 1994, one third of all lions in the Serengeti died from CDV, an unprecedented occurrence as prior to the outbreak, CDV had never been detected in wild lions [23]. The presence of CDV in lions was a bit puzzling given domestic dogs and lions rarely come into contact with each other. However, a study found that the virus likely spread from domestic dogs to hyenas (who often commute long distances to agricultural areas) outside the national park. The hyenas then reentered the park and spread the virus to lions [23]. This examples illustrates why CDV can be so dangerous for endangered species: so many species can carry the virus, allowing it to spread very easily. 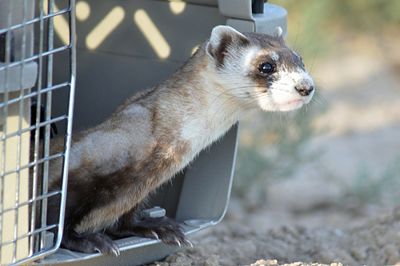 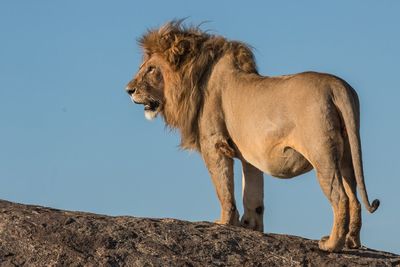 Two main strategies exist for the limitation of CDV outbreaks among endangered species: the vaccination of reservoirs like domestic dogs or the direct wildlife vaccination. The creation of CDV vaccination buffer zones around vital populations of endangered species has the potential to reduce the frequency of CDV outbreaks. In 1996, after detrimental CDV outbreaks among populations of lions (Panthera leo) and and African wild dogs (Lycaon pictus) in the Serengeti ecosystem, a project aimed to vaccinate domestic dogs around the national park was implemented [32]. The overall success of this project is still unclear as there has been at least one outbreak of CDV since the start of the program, but some results have been encouraging. The potential reason for the persistance of CDV is that it has spread to other wildlife in the ecosystem such as spotted hyena (Crocuta crocuta) and bat-eared fox (Otocyon megalotis) [32]. It will be increasingly important to establish effect buffer zones as human expansion continues to threatened endangered wildlife.

The direct vaccination of wildlife has proven effective both as a preventative measure and as a last measure to protect small populations of endangered species severely threatened by CDV. A study researched the preventative vaccination of southern sea otters (Enhydra lutris nereis) and found it both safe and effective [33]. Direct vaccination of wildlife has also proven effective when applied to small populations where CDV is a critical factor influencing mortality rates. In 1999, the Santa Catalina Island Fox (Urocyon littoralis catalinae) population experienced a drastic decline due to CDV. The Catalina Island Fox Recovery Plan used direct vaccination, captive breeding, reintroduction, and population monitoring to grow the island's fox population from as low as 100 to ~2,000 (as of 2017) [34]. Additionally, the vaccination of captive endangered species is crucial for the long-term success of captive breeding programs. However, for nondomestic canid and many other wildlife species, modified-live vaccines are dangerous and can even induce CDV <[24]. As such, recombinant vectored vaccines can provide an alternative for these species. Recombinant vectored vaccines are currently used safely on captive tigers [24]. The development and administering of safe, effect vaccines for both wild and captive animals will be essential to the conservation efforts of many endangered species.