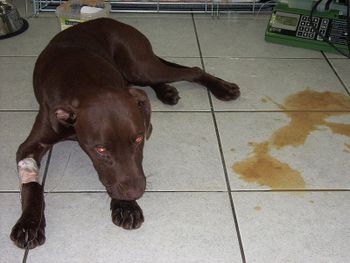 Canine parvovirus type 2 (CPV2) is a highly contagious virus that causes acute gastroenteritis in domestic dogs (Canis familiaris) (Johnson 2014) 6. CPV2 is a non-enveloped, single-stranded DNA virus belonging to the Parvoviridae family and genus parvovirus, along with feline panleukopenia virus (FPLV) and other parvoviruses of carnivores (Decaro and Buonavoglia 2012) 4. A wide range of species are affected by viruses of the Parvoviridae family, however CPV2 does not cross species lines (Decaro and Buonavoglia 2012) 4.

Canine parvovirus (CPV) was first isolated in 1978 (Appel et al. 1979, in Truyen 2006) 8, however further studies on the rate of CPV molecular evolution indicate that the virus likely emerged 10 years earlier (Shackelton et al. 2005, in Truyen 2006) 8. The exact origin of CPV2 is not known, although it is thought to have originated as a host range variant from FPLV or other parvoviruses (Decaro and Buonavoglia 2012) 4. Since the original type CVP2 was discovered, several antigenic variants--CPV2a, CPV2b, and CPVc--have replaced it entirely and have become distributed throughout the canine population worldwide (Decaro and Buonavoglia 2012) 4.

Structure and Function in Relation to Variant Evolution 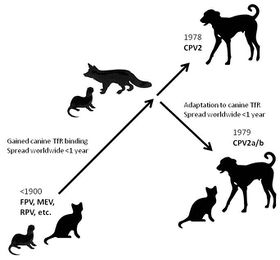 Figure 4. Evolution of CPV from FPV. Original CPV2 is no longer in circulation, but was replaced with CPV antigenic variants CPV2a and CPV2b. The key to this evolution was the gaining and adaptation to the canine TfR. Adapted from Truyen (2006) 8.

All CPV isolates are thought to be descended from a related feline parvovirus (FPV) strain. The differences in DNA sequence between CPV and FPV isolates can be little as 0.5% (Hueffer et al. 2003) 5. Two substitution mutations of two key amino acids--changed 93 from Lys to Asn and 323 from Asp to Asn--on the VP2 residues allowed for CPV to extend its host range to canines (Figure 2) (Truyen 2006; Hueffer et al. 2003) 8 5. Thus CPV acquired the ability to infect canines as a result from changes made to the capsid protein surface (Figure 3).

CPV is able to infect canine cells by binding to the canine transferrin receptor (TfR). CPV2 capsids enter cells via "clathrin-mediated endocytosis, colocalize with transferrin (Tf) in perinuclear endosomes, and then slowly leave the endosome and enter the cytoplasm prior to the DNA gaining access to the nucleus for replication," (Hueffer et al. 2003) 5. 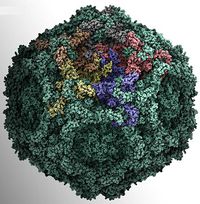 Studies have shown that the virus strain CPV2 binds to higher levels of TfR on cells than other parvovirus strains, and that canine TfR expressing cells were infected more efficiently by CPV2b variants in comparison to the original CPV2 type (Hueffer et al. 2003) 5. The adaptation of CPV to dogs led to the natural global replacement of CPV2 by the CPV2a variant, and later by the CPV2b strain, through the addition of a point mutation (Hueffer et al. 2003) 5. As CPV is a relatively new virus that continues to evolve and produce new antigenic types, the more predominant mutants are selected for by their ability to bind to the TfR and by extending host range, in newer antigenic types, to include both dogs and cats (Figure 4) (Truyen 2006) 8. 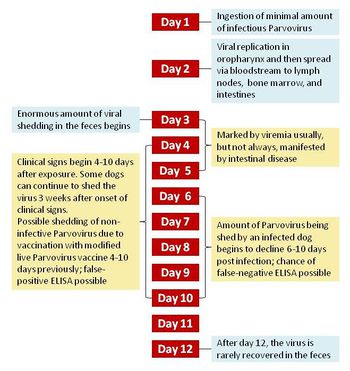 CPV2 is highly contagious and can be spread through direct contact, the fecal-oral route, or vectors such as fomites (Johnson 2014) 6. Most frequently, the virus is spread by indirect contact with infected feces, as they are highly infectious, containing billions of CPV2 virions per gram (Decaro and Buonavoglia 2012) 4. CPV2 is shed in the feces of infected dogs within 4-5 days prior to the onset of clinical symptoms, throughout the period of illness, and up to 3 weeks after clinical recovery (Johnson 2014) 6.

Puppies between the age of 4 and 12 weeks are the most susceptible to CPV2 infection, as this is when the MDA typically wanes (Decaro and Buonavoglia 2012) 4, while unvaccinated young (6 week to 6 month-old) dogs also remain vulnerable (Aiello et al. 2012) 1. Some breeds, such as Rottweilers, Doberman Pinschers, American Pit Bull Terriers, English Springer Spaniels and German Shepherd dogs are also thought to be at higher risk to CPV2 infection (Aiello et al. 2012) 1. 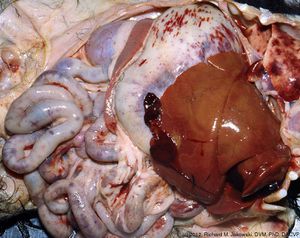 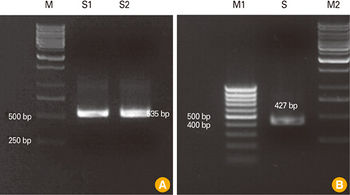 The most commonly used diagnostic tool is an in-house enzyme linked immunosorbent assay (ELISA) test, which works by determining the presence of parvovirus antigen in fecal samples (Johnson 2014) 6. Laboratory blood tests are also used in conjunction with ELISA and other tests, as the blood tests themselves are not definitive, but their ability to analyze diagnostic signs can contribute to the final diagnosis, as in the case of CPV2-induced lymphopenia (Johnson 2014) 6. Molecular assays, such as real-time polymerase chain reactions (RT-PCR) can be used to not only detect but also quantify CPV2 DNA (Figure 7) (Decaro and Buonavoglia 2012) 4. However, in more recent studies, minor groove binder (MGB) probe assays have been developed for type-specific characterization of CPV2 variants and can distinguish between vaccine and field strains (Decaro et al. 2006) 2. This direct and rapid characterization of CPV variants is not possible using microscopic examination, enzyme linked immunosorbent assay test (ELISA), immunochromatographic (IC) or haemagglutination (HA) tests, or real-time PCR methods, which can only detect CPV-2 presence, making MGB probe assays an important tool in detecting single-nucleotide polymorphisms between CPV variants (Decaro et al. 2006) 2.

Treatment of CPV2 infection in canines focuses on stabilizing fluid and electrolyte concentrations, preventing bacteremia from secondary infections, and controlling other medical signs and symptoms (Johnson 2014) 6. Dogs infected with CPV2 are often severely dehydrated due to vomiting and diarrhea, thus making fluid and electrolyte balance a priority. In order to better manage fluid rehydration, infected dogs are often taken off of oral food and water, and it is recommended that they be moved onto intravenous feeding until vomiting ceases (Johnson 2014) 6. Intravenous (IV) crystalloid fluid therapy is preferable over subcutaneous fluid administration as the IV fluids will transport nutrients to the damaged enterocytes at a significantly faster rate (Johnson 2014) 6. In addition to fluid treatments, patients are given a mixture of broad-spectrum antibiotics to prevent secondary infection, analgesics, and occasionally immune-boosting vitamins (Johnson 2014) 6. When the infection is caught early and with intensive treatment, the prognosis for affected dogs is good.

There are three key factors in preventing the spread of CPV2: 1) sanitation, 2) isolation, and 3) vaccination (Johnson 2014) 6. Under ideal conditions, CPV2 can live in an environment for up to a year, and it has been found to be resistant to most common detergents and disinfectants, and extreme temperatures (Johnson 2014) 6. However, the virus can be killed by dilute bleach on hard surfaces (Johnson 2014) 6. As CPV2 is highly contagious, infected dogs should be hospitalized in an isolation ward to prevent the spread of the virus (Johnson 2014) 6. Isolation will also help protect the infected dog against contracting a secondary infection by minimizing their exposure to other sick canines (Johnson 2014) 6. However, vaccination is the most successful means of preventing the spread of CPV2 infection in domestic dogs. There are both inactivated and attenuated vaccines available for use against CPV2 (Decaro and Buonavoglia 2012) 4. 'Live' vaccines are used most commonly in domestic dogs because the inactivated vaccines only provide short-term immunity (Decaro and Buonavoglia 2012) 4. These vaccines are made using either the original type CPV2 or the CPV2b variant, however there are concerns about the effectiveness of CPV2-based vaccines against variant CPV2 strains (Decaro and Buonavoglia 2012) 4.

"Duration of immunity for canine and feline vaccines: a review" (Schultz 2006) provides a review on the efficacy and duration of CPV2 vaccines, in addition to FPV and canine distemper virus (CDV) vaccines.

"An annotated historical account of canine parvovirus" (Carmichael 2005) reviews the evolution of CPV2 and its variants, providing a better understanding of how the disease manifests itself.

Edited by Casey Sprague, a student of Nora Sullivan in BIOL168L (Microbiology) in The Keck Science Department of the Claremont Colleges Spring 2014.