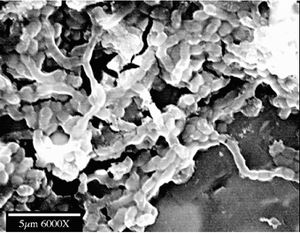 These microorganisms are thin, rod shaped and found in singles rods or in small chains. They are gram stain positive, meaning they have a large amount of peptidoglycan in their cell walls. They can be motile or non-motile and do not have spores. The only species proven to be mobile are C. mobile, C. alterfunditum and C. funditum.

Carnobacterium generally produce lactic acid mainly from glucose fermentaion. However, C. pleistocenium also produce CO2, ethanol, and acetic acid as well. Most species are psychrophilic and psychrotolerant, meaning they are able to grow and reproduce at temperatures between -10 to 20 °C. There is little known about the metabolism of Carnobacterium, except that they produce lactic acid and get their energy from fermentation of different hexoses. Acetic acid and ethanol are also common byproducts. They grow extremely well when heme, a blood pigment with iron, is added to aerobic conditions. However, they can also live in anaerobic conditions as well making them facultive anaerobes. Some interesting finding are that C. maltaromaticum and C. mobile may produce gas from glucose. Also, as a biproduct on a few Carnobacterium species fermentation, volatile alcohols, ketones, and hydrocarbons tend to accumulate in their habitat. However, Further studies need to be conducted to determine the positive and negative effects of these metabolites.