A Microbial Biorealm page on the Caulobacter

Caulobacter crescentus dividing into a stalk daughter cell (top) and a motile daughter cell with a flagellum (bottom). Courtesy of Yves Brun.

Caulobacter crescentus is a single-celled, small bacterium that divides asymmetrically producing cells that differ in structure and function - it is an ideal model system for the mechanisms of asymmetric cell division and has been studied thoroughly.

The genome of Caulobacter crescentus is structured in a circular chromosome and is comprised of 4,016,942 bp encoding for 3,767 genes. It was found that the C. crescentus genome encodes for more two-component signal transduction proteins that assist in cell cycle progression than any other bacterial genome sequenced so far. Caulobacter also uses DNA methylation as a regulatory mechanism in cell cycle progression. Caulobacter also has several genes and clusters of genes that are essential for survival in habitats with poor nutrients. Some of these genes encode for proteins involved in chemotaxis, outer membrane channel function, degradation of compounds with aromatic rings, and the breakdown of plant-derived carbon sources (list from Nierman et al. 2001). Others are involved in extracytoplasmic function sigma factors, which allow the bacterium to respond to "a wide range of environmental fluctuations" (Nierman et al. 2001).

Caulobacter are Gram-negative, rod-like cells that can be flagellated in a polar manner or have a stalk. Caulobacter lack intracellular organelles. They are hereotrophic aerobes and can be found in aquatic environments attached to particulate matter, plant materials, or other microorganisms by its stalk. Caulobacter asymmetrically divides to produce two types of daughter cells that are functionally and structurally different. The cylindrical body of a stalk cell is approximately 0.7 micrometers in diameter and 2-3 micrometers in length. The swarmer cell is smaller than the stalk cell initially; the different hydrodynamics due to the different morphologies between the swarmer and stalk cells allow swarmers to be isolated relatively easily (Stanford). 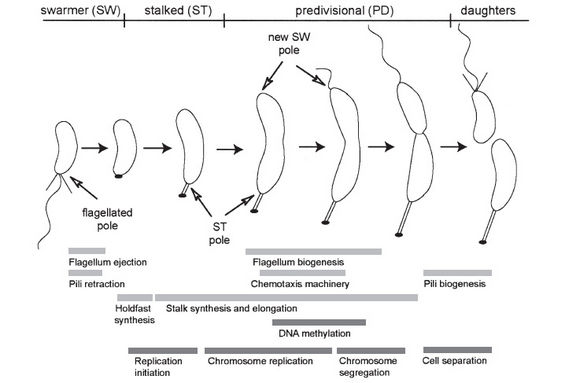 The cell cycle of Caulobacter showing the two daughter cells, one with a stalk and one with a flagellum, that are different in function and structure. From Jacobs-Wagner

In order to analyze the cell cycle regulatory mechanisms and other mechanisms of Caulobacter, many mutant strains have been made and studied. These fascinating mutants are a hands-on way to analyze genes. Stalk synthesis, for example, is greatly affected by the amount of phosphate in the bacterium's environment. These stalks, generally 1 micrometer in length, grow up to 20 to 30 micrometers in length in response to phosphate starvation. The increased surface/volume ratio is though to enhance nutrient uptake. One type of mutant, the skl mutant, has increased stalk enlongation even in phosphate-rich medium. This type of mutant maps to homologues of Pst genes that, in E. coli and other bacteria, encode for high-affinity phosphate transport proteins. These skl mutants allow expression of PhoB in Caulobacter uncharacteristic of wild-type cells in phosphate-rich medium. It was also found that this same phoB gene is necessary for stalk elongation during phosphate starvation because it encodes for the transcriptional activator of the Pho regulon. In E. coli, PhoB acivates or represses the transcription of pho regulon genes by binding to Pho boxes in the promoters of pho regulon genes. In E. coli and Pseudomonoas aeruginosa, it has been shown that pst mutants can no longer repress PhoR, thus inducing the Pho regulon and inducing the formation of an elongated stalk (Brun et al. 2000). 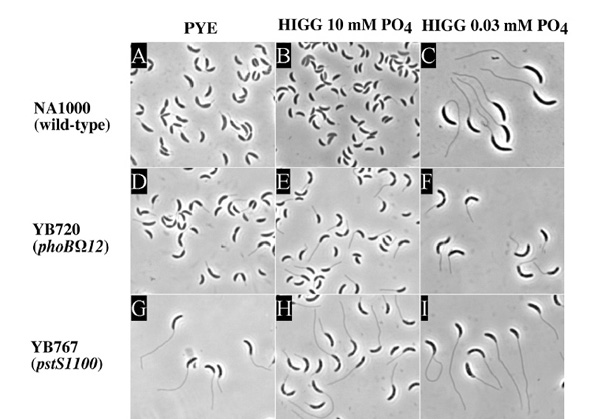 Wild-type and stalk mutant cells grown in different media: PYE, HIGG medium containing 10 mM phosphate, or 30 uM phosphate. A-C) Notice the elongated stalks in these wild-type Caulobacter appear only in phosphate deficient medium. D-F) Notice how the stalks are never fully able to elongate due to a mutation in the phoB gene. G-I) Notice the elongated stalks no matter the medium due to a mutation in the pst gene. From Brun et al.