Difference between revisions of "Celiac Disease" 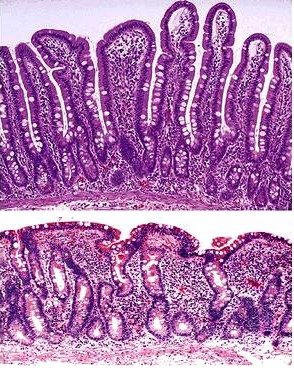 Intestinal villi from the epithelial lining in a non-Celiac individual (top) as compared to an individual with Celiac disease (bottom). Image from the Celiac Disease Foundation.

At right is a sample image insertion. It works for any image uploaded anywhere to MicrobeWiki. The insertion code consists of:
Double brackets: [[
Filename: Ebola_virus2.jpg
Thumbnail status: |thumb|
Pixel size: |300px|
Placement on page: |right|
Legend/credit: Electron micrograph of the Ebola Zaire virus. This was the first photo ever taken of the virus, on 10/13/1976. By Dr. F.A. Murphy, now at U.C. Davis, then at the CDC.
Closed double brackets: ]]

Introduce the topic of your paper. State your health service question, and explain the biomedical issues.


Celiac disease (coeliac disease, celiac sprue) is caused by an autoimmune disorder in which the affected person experiences an attack on intestinal villi following the ingestion of gluten, a protein found in wheat, barley, and rye. The intestinal function is greatly reduced, often leading to malabsorption, anemia, and in untreated cases, cases as serious as Type I diabetes or multiple sclerosis.