A Microbial Biorealm page on the genus Ceratium 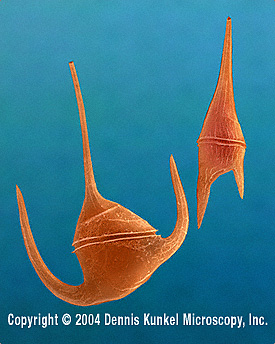 Ceratium is a genus of the phlyum Dinoflagellata. They are easily distingued from other types of dinoflagellates because of their morphological characteristics, described below. They are a relatively harmless group of organisms that play an important role as both predaotrs and prey in their environment.

It is common for the minicircle (described below) gene transcripts to undergo editing in Caratium horridum. The editing leads to amino acid changes or the deletion of a stop codon.

Ceratium spp. in the final stages of division. "Dinoflagellates" by Jean-Marie Cavanihac.

Ceratium species are easily identifiable because of their unique shape. They are covered with an armor-like cell wall, made out of polysaccharidel. The most distinguishing characteristic are the arms (also known as horns), the shape and size of which vary from species to species. Ceratium monoceras has a single, apical horn. The arms help Ceratium float, but prevent them from moving very quickly. Ceratium contain peridium. Another important feature is that they contain small plasmids (minicircles). Ceratium have two flagella. These wind around the cell body. The flagella each have different movements and shapes. The transverse flagellum beats in a spiral motion, while the longitudinal flagellum pulses in waves. Most Ceratium species also contain chloroplasts. Certain species are bioluminescent. Under adverse conditions, Ceratium are able to encyst themselves as a form of protection.

Ceratium are aquatic organisms, living in both marine and freshwater environments. They are most common in temperate areas, but can be found all over the world. Ceratium are found in the upper regions of the water, where there is enough light for photosynthesis. Unlike other dinoflagellate species such as Alexandrium, Ceratium are relatively harmless organisms. They are non-toxic, and are necessary forthe food web. However, they can cause a red tide if conditions allow for excessive blooming. While this red tide is not toxic, it can deplete resources in its environment, causing strain on the ecosystem. In general, though, Ceratium are necessary components of their habitats. They serve not just as nutrients for larger organisms, but they keeps smaller organisms in check through predation.