Difference between revisions of "Charophyta"

A Microbial Biorealm page on the Charophyta 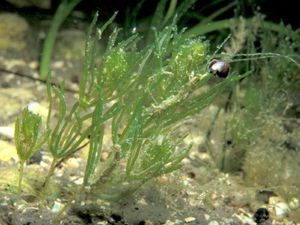 Charophyta are commonly known as stoneworts or brittleworts. They come from a monophyletic lineage, and are a paraphyletic group. There are five classes: Chlorokybales, Klebsormidiales, Coleochaetales, Charales, and Zygnematales. It was commonly believed that Charophyta were related to embryophytes (land plants). Karol et. al. (2001) performed a four-gene phylogenetic analysis, the results of which support this hypothesis. Embryophytes can be classified within Charophyta. Their analysis also identified Charales as the closest living relatives of plants. In addition, their research shows that the unicellular flagellate Mesostigma makes up the earliest branch of charophyte lineage.

Some of the characteristics between Charophyta and land plants are: homologous chloroplasts, as well as similarites in mitosis, sperm ultrastructure, cell wall composition, peroxisomes, and genetic data.

The work of Turmel et. al. (2002) suggests that the chloroplast DNA and mitochondrial DNA of Charophyta underwent structural changes such as gene insertion and genome expansion as they evolved. They focused on the species Chaetosphaeridium globosum, finding 124 genes and 18 introns in cpDNA. The number of genes and introns, as well as gene order, are very similar to land plant cpDNA. This suggests that land plant features were obtained as plant species evolved from Charophyta. However, they also found that the mtDNA of Charophyta and land plants are quite different. For example, they only share one intron. This gives evidence to the hypothesis that many of the introns in land plants appeared after the organisms emerged. 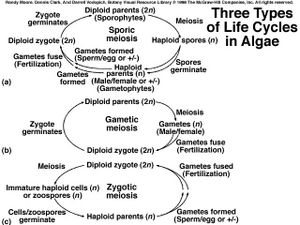 Nyberg and Saranpaa (1989) studied the cell walls of the species Chara aspera Willd. They found that the transverse walls of internodal cells contain plasmodesmata. The longitudinal walls of these cells are uniform and fibirllar. Nyberg and Saranpaa also noted two thin, distinct layers in the longitudinal walls. They found that the composition of internodal, cortical and rhizoid bulbil cells consist of randomly oriented fibrils. In the cortical cells, longitudinal walls have a helicoidal structure. There are six distinct layers in the rhizoid bulbil cell walls. Nyberg and Saranpaa noted that the cytoplasmic structure of internodal and cortical cells is consistent across Charophyta species. Charasomes were only observed in cortical cells. They are colored by chlorophyll a and b, as well as alpha and beta carotene, and xanthophylls. Gametes are protected by a layer of sterile cells. Charales and Coleochaetales have flagellated sperm that are arranged asymetrically. Most species have flagella. 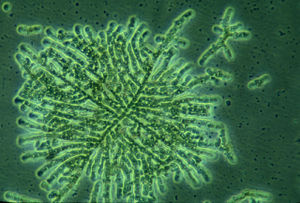 Charophyta are mainly freshwater organisms. They tend to grow in slow-moving or standing water. Rhizoids anchor Charophyta into mud or sand. Some species, such as Lamprothamnium succinctum and Nitellopsis obtusa can be used to dected the presence of fish in a body of water, as well as indicate the overall quality of the water. An abundance of Charophyta means productive water. Some species of Charophyta are are considered to be in need of protection. Lamprothamnium paplosum, commonly known as the Foxtail stonewort, is found in England. It lives in still, brackish, shallow water. This species is classified as a rare species, and is considered vulnerable.

Turmel, Monique, Christian Otis, and Claude Lemieux. "The chloroplast and mitochondrial genome sequences of the charophyte Chaetosphaeridium globosum: Insights into the timing of the events that restructured organelle DNAs within the green algal lineage that led to land plants." PNAS. August 20, 2002 99(17).