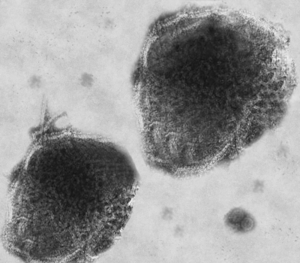 Chimeravirus, "the virus that shook the world", was the cause of over 8 billion deaths in the Great Pandemic of 2049. A genetic hybrid of Respiratory Syncytial Virus, Ebolavirus, and Human Immunodeficiency Virus, ‘’Chimeravirus’’ was created and released by the Christian extremist group 4 Horsemen. Within six months, nearly the entire world population was dead. The remaining population of around 100 million people were saved due to the Asamov Immuno-Supplementation Microbots. The name ‘’Chimeravirus’’ refers to the mythological Chimera, which was made of the parts of multiple animals.

Classification of ‘’Chimeravirus’’ was difficult, due to the combination of genes. The virus was eventually classified in Group VI due to the reverse transcription of RNA that occurs during reproduction.

(get info from paramyxoviridae)

(get info from paramyxoviridae)

(get info from HIV and edit for effects of virus)

‘’Chimeravirus’’ is transmitted via airborne vector. The infection happens in “waves,” as the virus first attacks the T4 lymphocytes, then runs rampant through the body once the immune system has been suppressed. This second wave of the infection causes hemorrhagic fever similar to the symptoms caused by the Filoviridae. Time from first infection to onset of symptoms is approximately 3-4 weeks. Infected persons are able to spread the infection before symptoms are apparent. The death rate for the virus is close to 100% for non-immuno-boosted individuals.