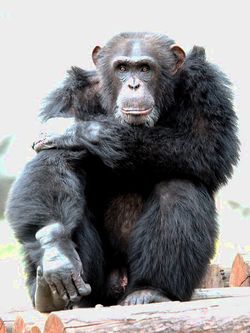 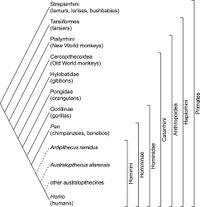 Figure 2: Phylogenetic relationships and classification of primates. This figure was included in H. W. Greene's "Evolutionary Scenarios and Primate Natural History," published in 2017. [2].

The subspecies are geographically isolated by the Sanaga River, which separates the western and Nigeria-Cameroon subspecies from the central and eastern chimpanzees, and the Ubangi River, which is the primary barrier between the latter two subspecies. [1] The Niger River and the Dahomey Gap (a stretch of dry forest across Western Africa) have both been hypothesized as barriers that have separated the western and Nigeria-Cameroon chimpanzees.[1] However, not all of these geographic barriers are complete; researchers have recently recorded migration between eastern and central chimpanzee subspecies.[1][6] Sequencing of mitochondrial DNA has revealed that there are two major chimpanzee lineages; one clade is formed by the central and eastern chimpanzees, while western and Nigeria-Cameroon chimpanzees form the other clade.[1] Subspeciation is further enforced by variable susceptibility to specific viral infections.[1][6]Simian immunodeficiency virus (SIV), the precursor to the human immunodeficiency virus (HIV), is known to infect only P. t. troglodytes and P. t. schweinfurthii.[1][6] Chimpanzee subspecies have also been shown to have specific behavioral differences, most notably nut-cracking behavior that only occurs in the west.[5][8]

In addition to continuous speciation, chimpanzees face extinction.[6][9] [10] Each subspecies is classified as endangered, the western chimpanzee critically so, having declined by about 80% in 24 years.[9] This population decrease has been attributed to factors including illegal hunting, habitat loss, and infectious diseases; regional extinctions in Burkina Faso and Côte d’Ivoire have reduced the western chimpanzee’s geographic range by 20%.[9]

Physiology
Chimpanzees, living in a variety of environments, are adapted in a variety of ways. The effect of environment is evident in locomotion, suitable for both terrestrial and arboreal settings.[11] Scientists have recorded instances of quadrupedalism and bipedalism in chimpanzee populations; neither type of locomotion is favored over the other in terms of energy efficiency, but locomotion in general has a relatively high metabolic cost in chimpanzees (41% more energy than expected for a mammal of similar body mass).[11] In addition, when bipedal, chimpanzees tend to take relatively small, frequent steps and require more side-to-side motion than habitual bipeds, which is typical of non-human primates.[11] This may be indicative of the lack of specialized anatomical structures for bipedalism; with a necessity to move effectively in a variety of environments, chimpanzees benefit from different possible types of locomotion.[11][12]

Many of the chimpanzee’s features are studied in relation to its human relatives, particularly concerning a chimpanzee-human last common ancestor and the rise of habitual bipedality.[12][13][14][15] For example, chimpanzees and humans are depicted similarly in the effect of aging on the thoracolumbar region, for which there is a difference seen in the region based on age (as opposed to the thoracolumbar region of gorillas).[12] In further comparison to Homo sapiens, alternative specialization is often studied in chimpanzees as means of characterizing the last common Pan-Homo common ancestor. This is evident in a comparison of muscle strength in the two primates; chimpanzees, on average, display a mass-specific muscular performance 1.5 times greater than humans, which may be similar to that of the last common ancestor between humans and chimpanzees. [14]

Gut Microbiome
Chimpanzees have also developed a distinct microbiome, most notably in the gut, which fluctuates socially and seasonally. [16][17] Chimpanzee gut microbiomes are mostly similar to those of other great apes, with a few key differences. [16] The gut microbiome is largely regulated by diet; because chimpanzees are primarily (though not exclusively) frugivores, their gut microbiome does not fluctuate nearly as much as those of other great apes who might be more seasonal eaters.[16] However, this does not mean that the chimpanzee gut microbiome does not fluctuate seasonally[17] In a 2018 study, it was noted that chimpanzees were distinguished by the relative abundance of Erysipelotrichaceae taxa, Prevotella, RFN20, and Sphaerochaeta; during dry months (May-October), chimpanzees had a considerable amount of Prevotella, while wet months (November-April) were characterized by high levels of Sphaerochaeta. [16][17] This seasonal fluctuation is coupled with social fluctuation.[17] Socially-based microbial development, unlike seasonal fluctuation, affects species richness within individuals, rather than specific bacterial abundance. [17] Chimpanzees display different social patterns in accordance with the season; while dry seasons are usually associated with relative solitude, wet seasons correspond with high sociability.[17] Furthermore, inheritance of gut microbial communities appears to be primarily horizontal, rather than vertical from parent to offspring, suggesting that sociability is necessary to maintain and develop microbial communities in chimpanzees.[17] In this way, chimpanzee populations cultivate microbial communities, in which microbiomes are connected by the interaction of their hosts; microbes have even been known to transfer between the guts of sympatric chimpanzees and gorillas.[17][18] The combination of seasonal and social fluctuations in the gut microbiome has granted chimpanzees resilience to changes in nutrient availability and disease.[16][17]

Behavior in chimpanzees, much like that of other primates, is thought to be the variable result of a combination of genetics and the environment.[19] Chimpanzee behavior, therefore, varies, often in accordance with population; each population exhibits broad behavioral patterns, ranging from rain dances to use of levers (Fig. 4).[5] 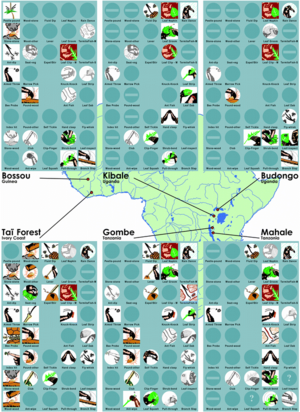 Tool use, in particular, has been studied extensively in chimpanzees.[5][8][19] The use of percussive tools, most commonly used to crack nuts, is a common example of tool use in chimpanzees and currently the only significant instance of behavioral differentiation between subspecies, as opposed to populations.[5][8] In foraging and hunting, chimpanzees often use probing sticks to collect insects or honey, though specific use varies by population.[5][19] In addition, chimpanzees have been known to fashion spears and lances, made of wood and sharpened with their teeth, to puncture prey (Fig. 5).[19] 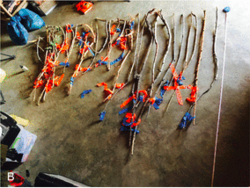 In hunting, chimpanzees and their demeanor can be more readily compared to members of the genus Homo than to other primates using similar methods, suggesting that the genes of a Pan-Homo common ancestor may have played a role in tool use, despite common techniques among other primates, which likely arose independently.[19]

Contributions to Medicine and a Collective Understanding of Homo sapiens

Disease
Attempting to understand chimpanzees and how they have evolved has resulted in crucial insight into issues that plague Homo sapiens, providing an expanded understanding of human disease and medicine. [20][21][22][23][24] By studying chimpanzees, scientists have come closer to understanding malaria (Plasmodium falciparum), a mosquito-borne illness that continues to plague certain human populations today, and how it evolved (Fig. 6). [20] 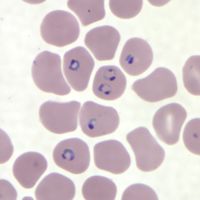 Figure 6: Rings of P. falciparum in a thin blood smear[6].

Chimpanzees are affected by similar strains of malaria (P. reichenowi and P. gaboni), which likely gave rise to the common human strain through horizontal transfer and subsequent speciation. [20]

Trisomy 22
In addition to pathogenic diseases, the study of chimpanzees allows scientists to gather information about genetic diseases.[22] Human trisomy 21, commonly known as Down syndrome, has been mirrored in chimpanzees in trisomy of the 22nd chromosome.[22] In a study published in 2017, a chimpanzee affected with trisomy 22 was reported to show similar symptoms to humans affected with trisomy 21, including early-onset vision impediments, congenital heart defects, hypodontia, and considerable social difficulties, contributed to by blindnes (Fig. 7).[22] 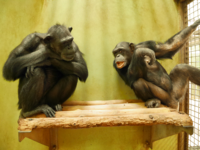 Figure 7: Chimpanzee with Trisomy 22 (right) and euploid chimpanzee (left) interact. The chimpanzees pictured are females of the same age. Published in 2017 in Hirata et al. "Chimpanzee Down syndrome: a case study of trisomy 22 in a captive chimpanzee"[7].

Evidence of somewhat shared disabilities between humans and chimpanzees can contribute both to a more developed understanding of relatedness between the species and potentially grant insight into treating such illnesses.

Vaccines
While chimpanzees can give insight into common illnesses, they can also be integral in the development of vaccines. Adenoviruses (Adenoviridae; Ads), a type of double-stranded DNA virus that broadly infects vertebrates, have historically been used as vaccine vectors.[21] Although human serotypes of adenoviruses (AdHus) have frequently been used, studies of chimpanzee adenoviruses (AdCs) are rising in prevalence due to a number of apparent benefits, including increased immunogenicity and a decrease in neutralizing cell responses in comparison to human adenoviral vectors.[21] [23] Chimpanzee adenoviral vectors have been developed in response to a number of pervasive and otherwise common diseases; in response to the 2016 Ebola outbreak, for example, researchers developed AdCs that successfully activated memory T-cell responses, distributed equally between CD4 and CD8 T-cells.[21] [23]

In January 2017, the Coalition for Epidemic Preparedness Innovations (CEPI) was formed with the purpose of creating and stockpiling vaccines for a number of pathogens with pandemic potential, including Ebola virus disease, Nipah Virus, Lassa virus, and novel coronaviruses.[23] In this case, scientists based the vaccines for outbreak pathogens on chimpanzee adenovirus vectors because of their relative safety and thus likeliness to be approved for temporary emergency use, if necessary.[23] In 2017, CEPI attempted to combat novel coronaviruses with a focus on preventing expression of spike proteins, nucleocapsid proteins, or both, with significant resource limitations in the laboratory.[23] As of July 2020, however, a chimpanzee-adenovirus-vectored vaccine (ChAd-SARS-CoV-2-S) has shown promising results in testing, reporting complete prevention of SARS-CoV-2 infection in the upper and lower respiratory tracts when administered intranasally.[24] In the development of vaccines, chimpanzees continue to provide important insight and treatment for a number of human diseases.[21][23][24]

AdCs have also been altered for use in cancer treatment, bypassing pre-existing neutralizing antibodies that posed a problem for human adenoviral vectors; a particular AdC vector (AdC7-SP/E1A-E3) has been shown to have significant anti-tumor effects in certain cancer cells and in mice.[21]

Over the past 40 million years, Pan troglodytes have evolved into a distinct species that is often studied for its similarity to other great apes, particularly Homo sapiens. Specific genetic and behavioral adaptations, particularly those that relate to tool use and potential culture, highlight not only how chimpanzees are a unique species, but how they are similar to both human and other non-human primates. A growing understanding of chimpanzee genetics and evolutionary relationships allows humans to further develop an understanding of shared genetics and therefore lends great insight into disease origin and treatment; genetic similarity between chimpanzees and humans also allows for significant advancements in the field of medicine and pathology. Continuing evolution of Pan troglodytes has given rise to four clear subspecies, each demonstrating the effect of the environment and incomplete geographic isolation on primate populations. However, with growing threats to chimpanzee habitats and rapidly dwindling population sizes, the continuing evolution and survival of chimpanzees is at risk.