A Microbial Biorealm page on the genus Chlamydia trachomatis* 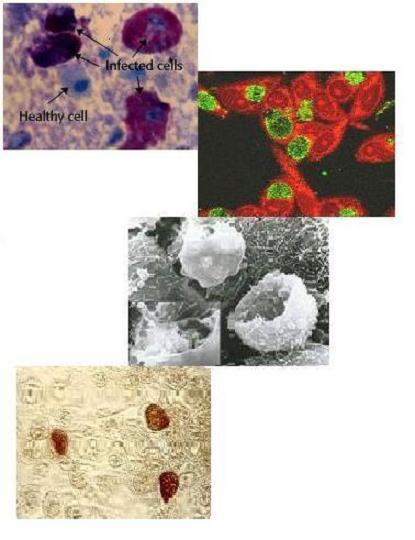 In ocular infections, C. trachomatis can be passed from person to person through direct contact in the eye with infected ocular or nasal fluids, sneezing or coughing, sharing clothing or towels, and eye-seeking flies. Initial infections result in swollen eyelids, sensitivity to light, and discharge from the eye. Recurrent infections, when left untreated, will produce scarring, and eventually lead to blindness. Instances of trachoma throughout history have been reported in Ancient Egypt, Ancient Greece, and trachoma was a health concern in the United States and Europe during the 19th and 20th centuries. In genital tract infections, C. trachomatis is transmitted through unprotected sexual contact with an infected person. Symptoms will develop within 1 and 3 weeks after infection and include abnormal discharge from the gentials, and painful urination. Most people with an infection will not exhibit symptoms, and left untreated, it can lead to pelvic inflammatory disease in women and epididymitis in men.

Because the majority of people with chlamydial infections will not show symptoms, they can unknowingly spread the bacteria to others. Distancing yourself from people with active eye infections, abstaining from sexual contact, and using latex condoms correctly and consistently can significantly reduce your chances of spreading or contracting the bacteria. Additionally, doctors recommend regular tests for people under 25, especially if you have more than one sexual partner, even if you have no symptoms. 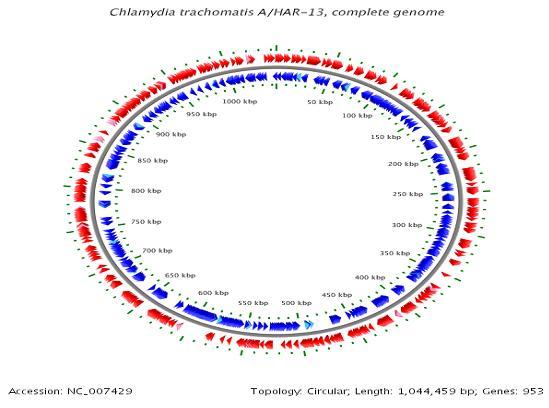 C. trachomatis exists as an elementary body and reticulate body. The elementary body, which is an infectious, nonreplicating particle, has a rigid cell wall, a genome of around 600 genes, and a plasmid with 7,498 base pairs. The elementary body also has an open reading frame for a gene responsible for DNA replication, and has an RNA polymerase responsible for transcripting the DNA genome after invading a host cell. The reticulate body actually grows and replicates, and houses the DNA genome, proteins, and ribosomes during the developmental cycle. C. trachomatis has 894 protein coding sequences that are between 135 – 5,358 nucleotides long. There are over 15 serovariants, four of which are associated ocular infection (serovariants A, B, Ba, and C). There is very little difference between the gene structure of C. trachomatis and the other forms of Chlamydia, in fact, C. trachomatis is 99.6% similar in gene structure to the other types of Chlamydia. The difference between C. trachomatis and other Chlamydial bacterias is an altered gene in the trp-pathway. 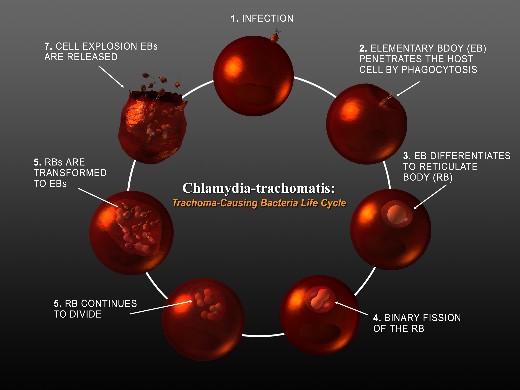 C. trachomatis is aerobic and intracellular. Most often you will find that the bacteria is coccoid or rod shaped. C. trachomatis requires growing cells to remain viable. Because C. trachomatis cannot produce its own ATP, it cannot be produced artificially, making people once believe it was a virus. The cell wall inhibits phagolysosome fusion in thephagocytes. It also contains an outer lipopolysaccharide membrane that contains cysteinepeptidogly can allowing for intracellular division as well as cell survival.

C. trachomatis has a glycolytic pathway which is liked to tricarboxylic acid cycle. C. trachomatis uses a form of electron transport to produce energy. Glycogen synthesis and the use of glucose derivatives influence the chlamydial metabolism. 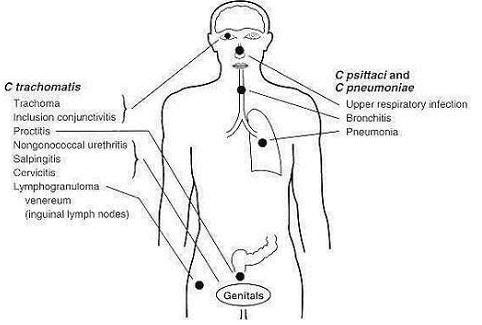 C. trachomatis is a small bacterium that cannot grow outside a living cell. C. trachomatis is a parasite to eukaryotic cells and cannot develop without a host cell, due to the lack of ATP produced by the bacterium alone. C. trachomatis can be spread in many different ways. The sexually transmitted disease can be spread during oral, vaginal or anal sexual contact with an infected partner. Also babies born to mothers with C. trachomatis can develop the infection in their eyes or in their respiratory systems leading to pneumonia from the birth canal. Also, in third world countries, flies that land of the faces of infected children can spread the infection as flies are vectors for the bacteria. Furthermore, the infection can be spread by clothing and hand contact. The infection is widespread in the Middle East, Africa, southern Asia, and China. There are approximately 90 million new infections each year. While most of the time C. trachomatis is asymptomatic in the hosts, it can cause, blindness (from eye infections), pink eye, abnormal discharge such as mucus or pus, from the vagina or penis, or pain during urination. If not treated, the infection can move inside the body and cause rectum inflammation, pelvic inflammatory disease in women, and inflammation of the testis in men.

The Worlds Leading Cause Of Preventable Blindness

C. trachomatis is currently the world's leading causes of preventable blindness. Many places in the world are locations of C. trachomatis epidemics. Approximately 150 million people living in trachoma epidemic areas have C. trachomatis, which infects the inner eyelid causing them to turn inward causing damage to the cornea. After repeated infections, blindness sets on during the victims 50’s or 60’s. C. trachomatis is the leading cause of preventable blindness because cases of trachoma have been successfully treated with antibiotics. New research has stated that by using a short course of the oral antibiotic azithromycin instead of the typical six-week course of daily tetracycline ointment is more effective in treating the disease. The National Institute of Allergy and Infectious Diseases state that six million people around the world are blind or severely disabled due to C. trachomatis. Also doctors have come up with the acronym SAFE that is used for trachoma control. Surgery for advanced disease, Antibiotics to treat and prevent infections, Face washing and good personal hygiene, and Environmental Improvements (clean water and sanitation). With the new distribution of the antibiotic medicine and the SAFE approach for control, hopefully we can see a great decrease in epidemic of preventable disease.